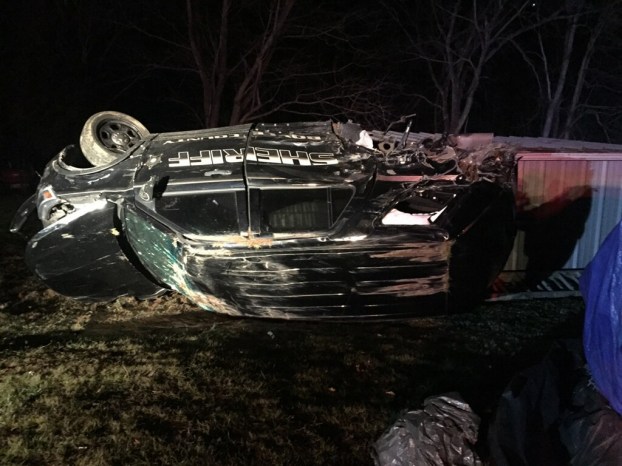 Sheriff: Judge may recuse himself in rock-throwing case

Boyle County Sheriff Derek Robbins says District Judge Jeff Dotson is expected to recuse himself Tuesday in the case against two juveniles who allegedly threw a large rock through the windshield of a passing deputy sheriff’s vehicle.

Robbins said Dotson has a relationship with or connection to the parents of at least one of the juveniles, which is why the judge plans on recusing himself.

“The next week or two will give us an idea of whether they’re going to try to charge them as youthful offenders,” Robbins said. “… Ultimately, it’s the prosecution’s decision, but I’m sure they’ll take our opinion into consideration.”

Boyle County Attorney Chris Herron said he could not comment about the specific case because juvenile proceedings are kept confidential. But he confirmed he has paperwork on the case and will be reviewing it.

Commonwealth’s Attorney Richie Bottoms said any attempt to charge the juveniles as adults would have to begin in Herron’s office, which would consult with the sheriff’s office while making the decision.

If Herron decided to charge the juveniles as “youthful offenders,” he would then take that request to Bottoms.

The two juveniles currently face three felony charges each: first-degree assault of a police officer; leaving the scene of a wreck and failing to render aid; and criminal mischief.

Those charges stem from a Sunday morning incident when Boyle County Deputy Phillip Dean was responding to the area of Ky. 34 north of Danville for reports of a dark-colored vehicle throwing rocks at other vehicles and damaging a semi-truck.

“He was probably about a half a mile away from the scene … when an approaching vehicle threw a large rock,” Robbins said. “He didn’t see the rock being thrown; his windshield exploded and it hit him in the face. I don’t know if it knocked him unconscious, but it caused him to lose control and he flipped the vehicle multiple times.”

The wreck occurred in the area of Stony Point Road on Ky. 34, where the westbound lane briefly widens to two lanes. The first emergency tone went out at about 4:50 a.m., said Mike Wilder, Boyle County Emergency Manage director.

Dean did not have to be admitted to the hospital and was already home recovering Sunday morning, Wilder said.

Robbins confirmed at 4 p.m. Sunday that two juveniles had been detained, questioned and then charged.

“We were able to track down some leads through video and just putting bits and pieces from different videos together,” he said. “We went to speak with them and the vehicle was there.”

Because they are juveniles, their names and photos are not being released at this time.

“They are very close to being 18,” Robbins said.

There are no further specific charges expected at this time, but Robbins said they could be charged for throwing a rock and damaging the semi-truck.

There may also be other vehicles that were damaged by rocks and the juveniles are also suspected of throwing eggs at other vehicles before they started throwing rocks, Robbins said.

“There were reports of more than one car egged around the same time in the same area prior to the rock incident,” he said.

Robbins said it may be some time before authorities piece together exactly how many vehicles were damaged by the juveniles and what charges may be brought. Anyone whose vehicle was damaged can come forward and potentially charges will be brought, he said, explaining that the teens would then be responsible for the cost of damage.

Robbins, who was busy pricing out a new vehicle to replace Dean’s totaled Ford Explorer on Monday, said Dean came into the office earlier to take care of paperwork for worker’s compensation. He said Dean might be able to return to work within a week or two, “but that is total speculation.”

When deputies get injured and have to take worker’s comp, they only get two-thirds of their usual paychecks, “so a lot of these guys try to get back as quick as they can,” Robbins said.

Dean has multiple broken bones in the center of his face and “trauma to the nose and mouth area,” he said.

While he’s recovering, other deputies are stepping up to fill Dean’s shifts and handle his workload.

Two juveniles were detained, questioned and then charged Sunday afternoon for allegedly throwing a rock into the windshield of a... read more