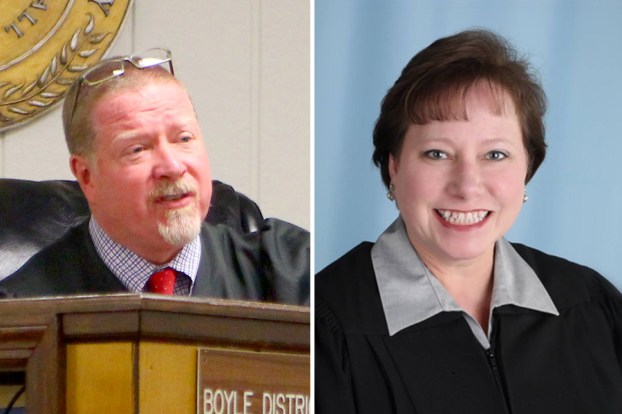 Boyle District Judge Jeff Dotson has recused himself from a case against two juveniles charged with throwing a rock through a deputy sheriff’s windshield and causing a wreck.

Both juveniles, wearing handcuffs and leg chains, were escorted by Boyle County Sheriff’s deputies through a hallway full of family members, into the district judge’s chambers before the 1:30 p.m. detention hearing. They are currently being held in Adair County. Booth came to Boyle County to handle the case.

Only parents of the juveniles were allowed in the courtroom during the proceedings.

Boyle County Sheriff Derek Robbins said Monday that Dotson would be recusing himself because he has a relationship with or connection to the parents of at least one of the juveniles.

The teens are “almost 18,” according to Robbins, and it’s possible they could be tried as adults.

They are accused of throwing a large rock through the windshield of Boyle County Deputy Phillip Dean as he was driving on Ky. 34 early Sunday morning. The rock shattered the windshield and struck Dean in the face, causing him to wreck.

Dean suffered broken bones in his face and multiple cuts and bruises; his 2016 Ford Explorer was totaled.

Under state law, a juvenile over the age of 14 can be tried as a “youthful offender” — essentially tried as an adult — if they are charged with a capital offense such as murder or a Class A or Class B felony.

It’s the county attorney’s decision whether to make a motion to try a juvenile as a youthful offender, after consulting with the local commonwealth’s attorney, according to state law.

Following the hearing late Tuesday afternoon, Herron said he cannot comment on the case because it is a juvenile proceeding which is confidential; Commonwealth’s Attorney RIchie Bottoms has said he would be “on-board” to try the juveniles as youthful offenders if Herron makes the motion to do so.

If the motion is made, there must be a district court hearing to determine whether trying the juveniles as youthful offenders would be appropriate. According to state law, the court must consider eight factors at the hearing:

• the seriousness of the alleged offense;

• whether the offense was against persons or property;

• the “maturity of the child as determined by his environment;”

• the juvenile’s prior record;

• “the best interest of the child and community;”

• the impact to public safety;

• the availability of rehabilitation and services needed within the juvenile justice system; and

• evidence of participation in a gang.

If at least two of the eight factors are met, the court is required to grant the motion and the juvenile will be tried as a youthful offender, according to state law.

Ben Guerrant says one of the reasons the local senior citizens center is able to help so many elderly in... read more