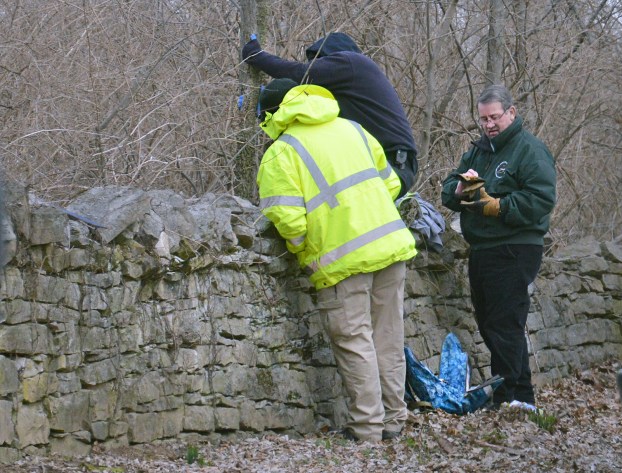 Photo by Robin Hart/robin.hart@amnews.com Two first responders, left, and deputy coroner Mike Wilder, search the area around where a juvenile's belongings were left on a rock fence near a home on Lebanon Road early Thursday morning.

Boyle child survives after running away on dangerously cold night

A Boyle County juvenile who ran away from home late Wednesday night or early Thursday morning is lucky to have survived the bitter cold temperatures.

At around 8 a.m. today, the Boyle Sheriff’s Office received a call from a resident on Lebanon Road reporting that a girl “just showed up there last night,” said Lt. Kyle Lyons with the Boyle County Sheriff’s Department.

The 12-year-old lives no more than half a mile down the road, Lyons said, and “she may have even slept outside for while, but probably not long.”

She may have arrived at the home about 3:30 a.m. “… she got really, really cold and was beating on doors” at the home, Lyons said. She didn’t know the residents, he added.

“I think she got cold and it made her wander off into some weird stories about some bodies by some hay bales. However, we found that not to be true.”

Temperatures in Boyle County got as low as 7 degrees around 11 p.m. Wednesday; they had inched up to around 11 degrees by 3 a.m. Thursday, according to data from the Kentucky Mesonet Boyle County weather station.

Officers located the girl’s family and her father picked her up around 8:30 a.m. and took her home. She hadn’t suffered any physical harm from the cold, Lyons said.

Before discovering that there were really no bodies in the area, EMS, sheriff’s officers and the coroner were called to the location. What appeared to be clothing, a notebook and a blue backpack were strewn over a rock fence near the home, and officers were seen searching along the fence row and around a nearby creek.

Lyons said, “I wish I could explain it, but I don’t understand it fully myself,” as he was describing the stories told about bodies in the area.

Boyle County deputy coroner Mike Wilder, who was on scene said, “One of the good things is this turned out well.”