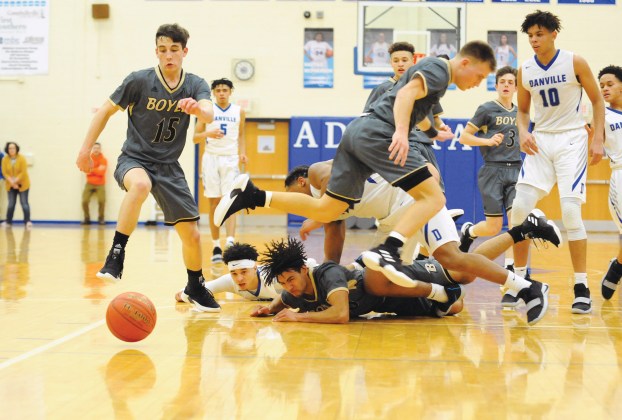 Neither team could score in the first quarter.

By the fourth quarter, everyone could score.

It was the “typical 45th District game,” Danville head coach Ed McKinney said. And it was again the Admirals who came out on top, beating Boyle County 54-46.

The two teams combined for 12 points in the first quarter and then poured in 36 fourth quarter in a grinding district battle. Danville (21-2, 5-0) claims the top seed in the district tournament with the win.

“In the second half, we played the right way, we played like we should play against their size,” McKinney said. “We started playing downhill a little bit, which is what we should do. When we’re playing downhill, interior passes from big to big, it’s hard to do much about that. I thought we did a good job of that, then we got on the glass too.”

The Rebels held the foul advantage at the break, with four different Danville players with at least two fouls.

“We knew that if we executed, we could get layups,” Boyle head coach Steve Adams said. “And we were doing that, we were attacking and getting them in foul trouble. What we didn’t want to do was come down and take a quick shot or try and make a great play, then have a turnover. We wanted to methodically make them guard.”

Zach Thornton had three fouls for Danville. The Admirals had 10 fouls in the first half which stalled the rotation McKinney wanted to use.

“That just destroyed any rhythm,” the coach said. “We’ve got a fairly good substitution pattern, we try to use a lot of guys. That just gets messed up with fouls. I’ve been using Brennen (McGuire) some but he’s a defender, when you’re not scoring it keeps him on the bench. The foul situation messed our rhythm up, but you just live with it.”

But Danville’s shots started falling in the third quarter, as the Admirals scored 19 points to take a 34-30 lead into the fourth. The Admirals stayed out of foul trouble and DeShaud St. Martin took over on offense.

St. Martin finished with 16 second half points and led the game with 21 points and nine rebounds.

“Except for a 3-4 minute stretch there where we got away from what we were doing and let them get some transition baskets, we had it right where we wanted it,” Boyle head coach Steve Adams said. “But the kids continued to fight. We’re getting better every game. By the time we get it going, Grant (Hotchkiss) goes down. Reese (Smith) was at a funeral all day today. But the kids fought.”
Boyle battled through that adversity and made it a four-point game late in the fourth quarter, but Danville put the game away at the foul line: Thornton finished 5-for-7 from the line to lead his team.

Adams said he likes what he saw from his team, battling back after losing the halftime lead.

“We’ve still got some things to work on, but I’m sure nobody wants to play us when we get there,” Adams said. “These kids, through the adversity we’ve had this year, they’ve come in to work every day. I’m so proud of them, and you can see we’re getting better every day. We’re starting two freshmen and a sophmore. We’ve still got things to shore up, but I’m happy with our fight. We thought we should’ve won.

“Except for that 3-4 minute stretch, I thought we did a good job keeping them off of the offensive boards when we were able to set our defense and not let them get out in transition. But the kids fought back, we cut it down. We’ve got to do a better job at the free throw line.”

Danville has had a pair of tight 45th District contests after the All-A state tournament last week, and McKinney said his team’s still learning how to play as the 21-2 juggernaut.

“This team, we’re 21-2. You’re getting everyone’s best shot,” McKinney said. “I would imagine we’re feeling the pressure and they are probably coming in here more loose. We’ve been in that role a lot of times, it’s something we’ve got to get used to.”

Danville’s girls basketball team didn’t have much of an All-A hangover. The Admirals dominated their cross-town rival Boyle County on... read more