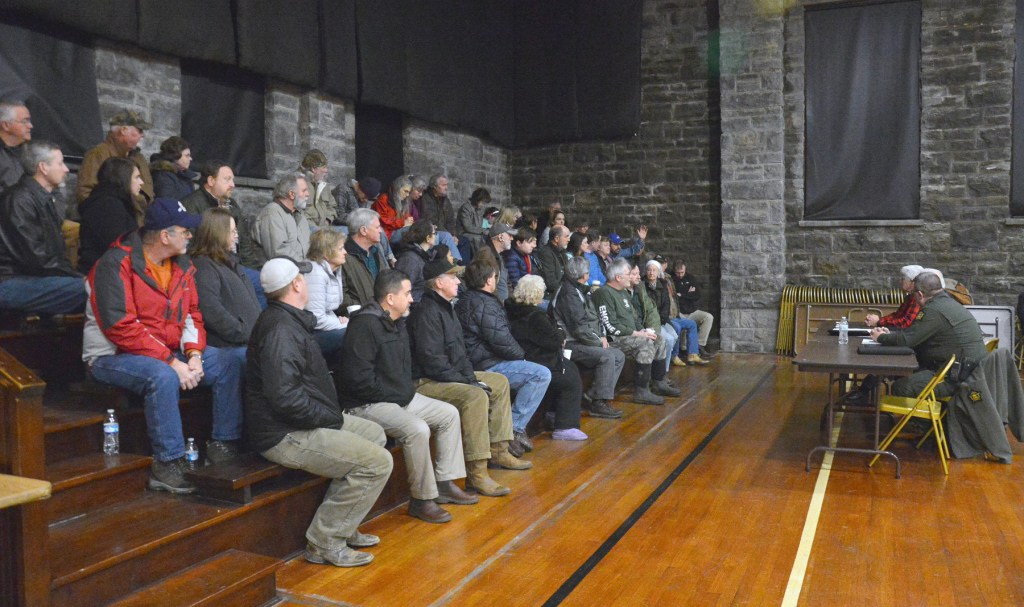 Communication issues, road problems and flooding concerns in western Boyle County were the main topics brought to the attention of county officials in Forkland Thursday night.

The meeting was the first “Pulse of the People” event hosted by County Judge-Executive Howard Hunt, along with District 1 Magistrate Tom V. Ellis and Boyle County Sheriff’s Deputy Chris Stratton. The events are intended to let the public provide officials with opinions on what Boyle County Fiscal Court should focus on. 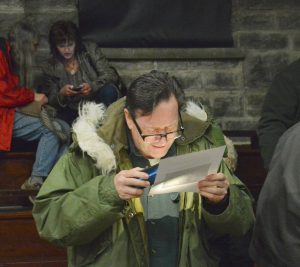 Photo by Robin Hart/robin.hart@amnews.com
Mike Michelini looks at a map where a proposed AT&T cell tower may be built near his home following a public forum in Forkland Thursday night.

Additional meetings are being scheduled in each of the county’s five other magisterial districts.

The ongoing complaint of poor or non-existent cell phone service was made clear to the officials who were seated at a table before a crowd of over 40 concerned residents at the Forkland Community Center.

The lack of landline maintenance over the years is making communications more difficult, some audience members said. Landlines are often unreliable and service can go out for days at a time.

Hunt said he received notification about two weeks ago from AT&T that it had filed an application to construct a cellphone tower off of White Ridge Road near Parksville. “But it’s not in concrete,” he warned.

The proposed tower could provide high speed voice and data service to part of the coverage area, Hunt said.

Another audience member said “everybody needs to be considered” as cell tower construction projects are planned. Not only is wireless service vital for first responders, it’s also crucial to the area’s children who need the service for homework assignments and research, the attendee said.

Another resident asked Stratton if the sheriff’s office was going to continue patrolling the area, especially when it gets warmer and people on 4-wheelers begin to ride over private property. Stratton said yes, but it’s up to the property owners to call the sheriff’s office immediately when they see someone trespassing and tearing up the land and streams.

“You all don’t have to live like that,” Stratton said.

Residents can’t call to report trespassers and four-wheelers if there’s no cell service or the land lines are out, the resident answered.

Boyle County Fire Station No. 6 is also a concern for residents in District 1. Not only does the rough gravel drive leading to the station need to be paved, the building needs repairs, one member of the public said.

The building was damaged early last summer when the entire area was flooded.

Hunt said the fire board has received the insurance payment but hasn’t released the money. “It needs to be fixed. It’s way past being fixed,” Hunt said. 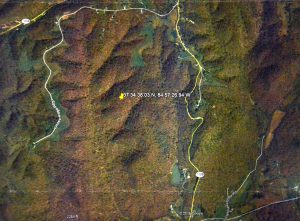 A map showing where a proposed AT&T cell tower may be constructed in Boyle County between Whites Ridge Road and Ky 1108.

Several people talked about flooding and ponding on roads and bridges during heavy rains. Both Hunt and Ellis told them to take photos when flooding occurs so they will have some idea as to where the problem is coming from and how to fix it.

Other questions concerned cracked roads, the possibility of altering how fire insurance rates are determined and why a flood zone was expanded to include property that has never been flooded.

At the end of the meeting, residents were encouraged to contact Hunt or Ellis when a problem arises.

“We are very sincere about being difference makers,” Hunt said.