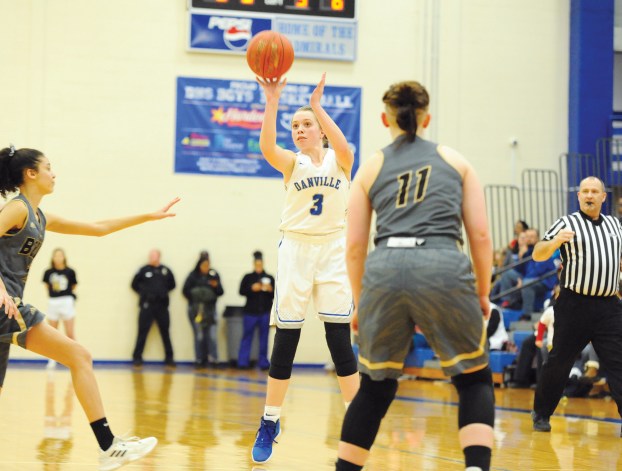 Danville’s girls basketball team didn’t have much of an All-A hangover.
The Admirals dominated their cross-town rival Boyle County on Friday 66-30 in what head coach Judie Mason said was one of their best performances of the season.

“I thought we played well tonight. Forget the score, we played well tonight,” Mason said. “And we’ve practiced hard. Since the All-A, we had a pity party for a day because we felt like we should’ve won the game. But they came back with a good attitude, we had two of our best days in practice after we lost in the All-A, which is hard to believe. I’ve been doing this a long time and usually you don’t bounce back like that. Tonight, we were really intense, played well, ran the floor. The first half was probably as good as we’ve played in a long time.”

The Rebels had shots early in the game but were settling for too many from the outside, head coach Greg Edwards said.

“I thought we started the game too focused on shooting threes,” he said. “We had chances to get in the paint and we didn’t take advantage. But I thought the main thing, we just didn’t compete. I thought Danville took it to us and we just didn’t respond at all. It’s a rivalry game, we just didn’t look like we were fired up or ready. We just laid down and they took advantage of everything they could get, and give Danville credit. They’re pretty good.”

Danville’s offense continued to flow from its defense in the second half, as the Admirals put a running clock into effect late in the third quarter.

Mason said that her team is playing the way she wants them to play and she’s “not having to coach every single time down the floor.”

Edwards said that he saw his team battle when the two teams played at Boyle nearly one month ago. And, he said, the Rebels have been moving in the right direction since that game.

But the Rebels took a step back tonight.

“Tonight, we just had the attitude that we weren’t going to win this one,” Edwards said. “I’ve always said, it’s 80 percent mental. It’s what kind of attitude you bring into the game, and tonight I was very disappointed.

“We’ve been playing really good basketball, that’s why I was so disappointed. I thought we played well against Collins, played great against Woodford, played great against Garrard and actually played pretty good against Lincoln. Tonight, we reverted back to a month ago. We took a step back. That’s disappointing. Good news is, great thing about basketball is you’re not defined by one regular season game. Hopefully we can learn from this and move forward.”

Mason did have one coaching moment in the second half when Boyle sharpshooter Keely Bowling hit back-to-back threes. Mason called a quick timeout to remind her team about a shot Murray made in the All-A state tournament.

“He adjusted, he brought her down as a trailer and all I could think of was against Murray when No. 23 hit that one to tie the game in All-A state,” Mason said. “I reminded them of that during the timeout, and I said we can’t have a shot like that beat us again. But dang, she can pull from anywhere. But we adjusted, and everything I asked them to do tonight, they did.”

The two teams will play again in the semifinals of the 45th District tournament.

“That’s the thing, I told the girls, first round, that’s who we’re playing,” Edwards said. “We can learn from this game, get ready to play, we’ve got six games to try and get better and do that. See what happens.”

LANCASTER — The Lincoln County girls improved to 19-3 Thursday night with a 68-37 win over Garrard County. The Lady... read more