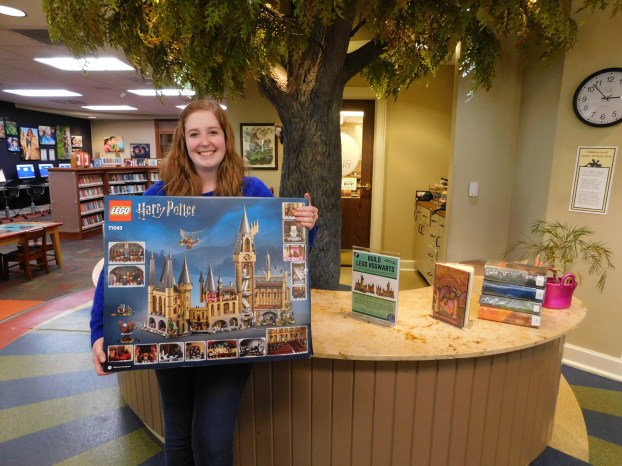 Contributed photo Youth Services Librarian Kinsey Hisle holds the LEGO Harry Potter boxed castle inside the Children's Library at Boyle County Public Library. She is excited for kids to come by and help build the castle.

It is no secret that J.K. Rowling’s “Harry Potter” book series has been enormously popular, inspiring readers of all ages for more than 20 years. The series continues to be well circulated among local library patrons, as well. Now, thanks to a generous donation from the Friends of the Library, during the month of February, youth patrons of the Boyle County Public Library will be able to build LEGO Hogwarts Castle. The completed castle has intricately designed chambers, towers, and classrooms, plus hidden features and scenes from the Harry Potter movies.

Youth Services Librarian Kinsey Hisle is excited for the building to commence.

“Playing with LEGOs sparks creativity,”she said. “But following a plan for a massive build takes patience, planning, and collaboration. Building a LEGO set with others uses STEM engineering skills while also giving builders a chance to work as a team and meet new friends who share their interests.”

The first building date is scheduled for 2-4 p.m. Sunday, Feb. 3 in the Mahan Meeting Room. All youth (ages 9-18) are invited to begin this month-long project. Those who are interested in building the castle but are unable to attend on Sunday can still participate in any of the other nine scheduled building dates, or at pop-up building times that may occur throughout the month.

“LEGO Hogwarts Castle is over 6,000 pieces, making it an ambitious project that most kids probably would not get the chance to build individually,” Hisle said. “The Hogwarts castle is a beloved symbol of unity, imagination and friendship from a popular book series, which makes it the perfect LEGO set to construct together during this month-long building project.”

Youth who participate in the build will be entered to win a 20th anniversary edition of the Harry Potter series book of their choice.

This collaborative LEGO build offers something fun to work on for kids who come to the library to warm up and hang out during the month of February. Once completed, the castle will be placed on display to inspire all library visitors.

Centre grad among first inductees to Oceanography Hall of Fame

A former Danville resident and Centre College graduate was one of three inductees in the first class of the Naval... read more