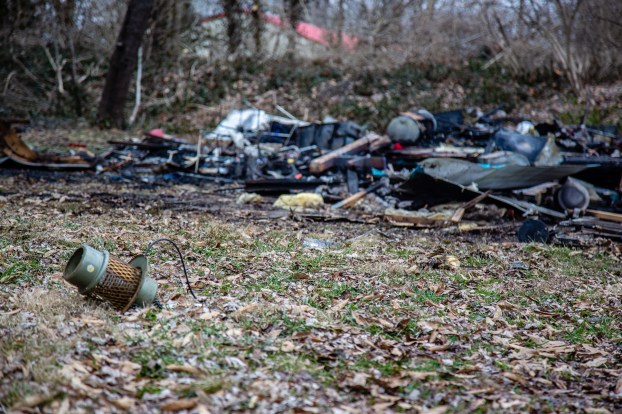 Photo by Bobbie Curd Remnants of the camper laid charred on the ground in Junction City.

Junction City Fire’s public information officer says it’s one thing to have to battle a fire, but another when explosive material is on site. Jim Harris says this morning’s fire, which could have been deadly, is a good reminder for citizens to keep a close watch on space heaters during the cold weather.

Harris was dispatched to what was thought to be a trailer fire at 2:36 a.m. Friday morning. He actually lives just around the corner from where the incident was reported.

“As soon as I heard them say it was oxygen tanks, I knew we were going to have an issue,” Harris said. No sooner than he’d walked out his front door, he heard the initial boom.

When he pulled up to the scene at 145 Mitchell St., what he found had been a camper, but was now nothing but a ball of flame, Harris said. “It was gone.”

He described it as a 6-foot long camper — ”Or that’s what it was. It’s now just a big divot in the ground, left from the explosions.”

Harris said he made his way back to the fire, observing yet another explosion.

“But it was from the light fixture on the front of the trailer,” he said. Then, he realized debris was flying through the air, coming from the fixture. He said the piece that passed him by “cleared my head by about 20 feet.”

When all was said and done, Harris said there were six total explosions from propane tanks that were stored right behind the camper. The eruptions caused debris to shoot up about 20 feet into trees, he said.

“I won’t be surprised if we find some in our trees, outside of our home or in the yards …”

There were also four oxygen tanks that ruptured, according to a news release from the Junction City Fire Department.

The camper was located about 10-15 feet from a residence, but everyone inside were evacuated to safety. Harris said crews put the homeowner, her husband, their son and several nephews inside of crews’ vehicles to keep warm and to keep the scene cleared until it was safe for them to return. The adjacent home was not damaged, he said.

“This could’ve turned out a lot worse with the propane tanks,” Harris said.

The camper was in a heavily-populated area, and all six tanks seemed to explode at the same time. He said it “left a fairly good sized divot in the ground, where the explosions happened.”

Due to the initial boom being so huge, Harris said some reported hearing the explosion as far away as Moreland. A Moreland firefighter actually heard the explosion began to head toward Junction City, he said.

The scene was taken care of pretty quickly, in about an hour, Harris said.

“If it’s not a sustained gas leak, we can usually get it under control immediately, when it’s just normal combustibles,” he said. Once that’s established, it’s like battling a normal fire.

He said crew members arrived extremely quickly to the scene — he wasn’t there three minutes before they began rolling in, quickly gaining control of the blaze.

“At this point, it’s not considered suspicious,” Harris said. “The gentleman stated he had left a space heater inside it that he didn’t turn off.”

Harris said this was a dangerous reminder.

“With the weather getting so cold, space heaters are great. But they’re also dangerous. Heat is the biggest ingredient in a fire. Always keep an eye on heaters, and make sure there’s nothing flammable around it,” he said. “Especially not explosives.”

Centre grad among first inductees to Oceanography Hall of Fame

A former Danville resident and Centre College graduate was one of three inductees in the first class of the Naval... read more