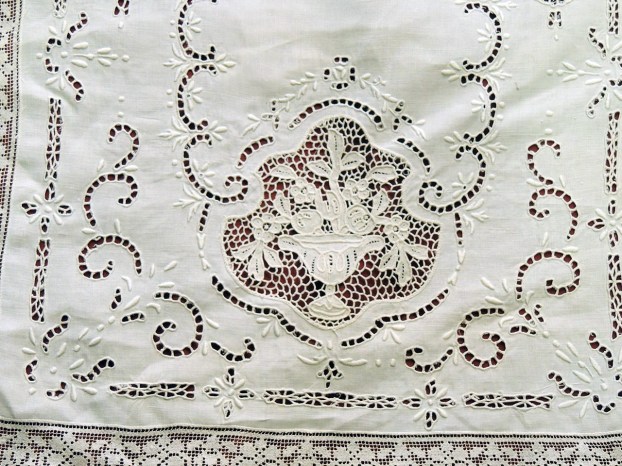 Question: Mr. Sampson, I know that you can help me and provide me the information I need. I have a set of linens that I have babied for quite some time. These linens belonged to my grandmother and I’m 78 years old, so you know how old they are. Family lore always said that she bought them on her honeymoon in either Belgium or France. Her husband was very wealthy and they were taking in the sites while their home was being built.

The set is large and it all matches. I have one banquet-sized cloth, four round cloths, four square cloths, a somewhat smaller rectangle cloth, 12 place mats, 24 huge napkins, 18 luncheon napkins, four or five runners and dozens and dozens of small round, oval and square mats that would have been used under finger bowls, decanters and the like.

Mother used to have a housekeeper who kept these linens spotless. But, upon the death of my mother many years ago, I’ve had to rely on several people to keep them in line. A woman in Tennessee did them since my kids were in school, but she died ages ago. A husband and wife in Virginia did them once or twice, but are too old to handle them now. I used a small company in Ohio for the last wedding dinner but it was very expensive. However, they did a fine job.

They have for the past 25 years been kept in acid free boxes or on acid-free non metal hangers in special bags. I have always kept them in fine condition. I addressed stains quickly, kept them out of the sun, away from bleach and never let anyone smoke around them. They are like delicate 100-year old children to me.

The trouble is my daughters and daughters-in-law do not want them. I mean they want to use them, they just don’t want to care for them.

Everyone thinks it’s best if they are sold. Are things like this worth anything in today’s fast lifestyle?

Thank you for your time. Regards,

Answer: The market hasn’t been kind of porcelain, silver and crystal services. I know, people get tired of me saying this, but it’s all too true. So many times, I’m in a home that’s being broken up or there has been a decision made to move Mom or Dad into a safe environment, and people are going through things. Invariably, somewhere, there will be a pile of sad linens, poorly ironed, badly stored or in the worse cases, wadded up in a bag.

Fine linens have been treasured since biblical times. Every wonder why? It was very labor intensive and very expensive. Flax had to be grown, tended, harvested, beaten, combed and spun, all before it even became fabric. Needless to say, it was quite a status symbol.

A dowry chest or hope chest was started when a girl was born. Often upon her death it was bequeathed to her eldest daughter. Well woven linen is tough but it’s not bullet proof. It must be taken care of to last the ages. Today, thanks to mass production, you’ll see cheap linen in stores, but it’s a far cry from the linen of 50 years ago. So linen is special.

Let’s call them pitiful linens. Those stained, frayed, badly stored and ironed linen “rags”, that I referenced in the above paragraph. These linens at auction, stuffed in box lots, rarely bring anything.

Now, someone could love them back into shape and put them in a store or stall. But that takes hours, and let’s face facts, they aren’t exactly the prizes of the fair today.

However, in a world of nags, you have a champion stallion!

First, you have a pedigree, history and a story. That always adds to the value. Your gorgeous linens are likely from Belgium or France, as your family legend supports. Many, if not all European countries, had one or two regions that excelled in linen or embroidery. It was the fashion of the day for fashionable American’s to bring back the treasures or Europe. I can only imagine the time that it took a team of women to produce these works. They are not rare. But in this rarefied condition they are desirable. Just when I think that one wants the trappings of the gilded age, I see something like this. I could see someone with the proper house and mind set going nuts for these linens. I could see in a very upscale antiques store this set, as a whole, would be priced at about $1,800. A farthing for the time and efforts involved. Remember this is at a retail level.

Sadly, broken into more manageable, bite-sized pieces, it could bring more. On the wholesale market I did some “prices realized” on some auction databases. At a well advertised auction the set could bring about $700. I know it’s not a lot. But I have to give you a shout out for being a great custodian of your property. Thank you for a great question.

‘Mad stones’ were thought to cure rabies in 1800s

Mad stones were used to treat rabies in earlier times. Besides rabies, the mad stone also was used to treat... read more