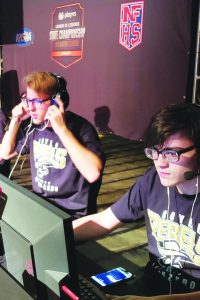 In most high schools, students are offered the chance to participate in a wide variety of activities. While a large portion of teens do take advantage of multiple opportunities, few can reach the passion level that one particular student feels about his involvements.

Senior Bryan Stocker fills his résumé with activities. Between video games, technology and reading clubs, and being in the marching band, Stocker is devoted to growing and learning with people with similar interests.

Stocker explains his current schedule. “Now that marching band season is over, I participate in eSports, speech and debate, singing lessons with the drama teacher, and D&D (Dungeons and Dragons video game) with both my friends and also at the Boyle County Library’s public sessions.”

“I play video games at home including, but definitely not limited to, the eSports games. I am also part of the STLP (Student Technology Leadership Program), TSA (Technology Students of America), and the Magic: The Gathering Club, where I am the leader.”

Reading is another passionate hobby for Stocker. “Reading took me by surprise actually. It was fourth grade and I hated reading because my peers did, but then they made reading a grade. I begrudgingly picked up the book A Bear Called Paddington and then I couldn’t put it down.

I am taking AP Literature because of it, and I have dozens of books stacked up in my room because my bookshelves are too full.”

Often, activities like these are chosen purely from self-interest. Stocker explains that his family had a large influence over these choices as well. “My Opa (German for grandfather) and my uncle on my mom’s side taught me and my twin brother (Keith) how to play both Magic and D&D, igniting the passion for those. My uncle also passed down his video games, so we got a very early taste of gaming that has had me and my brother suckered in since.”

Once more, a “try and see” from his family created another personal passion for Stocker. “In fifth grade, the current band teacher Lucas Sledge sent home a paper about after-school band. My parents urged me to try it, and much like the video games, I have been doing it since.”

Another creative passion came about unexpectedly when Stocker discovered acting.

“Acting didn’t come to me until sophomore year, when I stayed after school and stumbled upon the speech and debate team. The next week, I was a member and doing improv. This caused me to go out and do a community play at Ragged Edge. I then took more theater-based classes and expanded on that.” 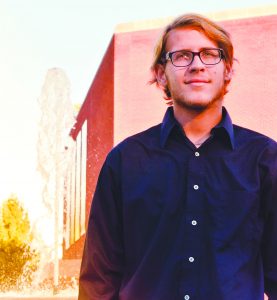 Photo by Christa Stocker
Stocker is very passionate about his activities that have “helped shape me for almost two decades.”

Preparing for the future, Stocker wants to attend a college that not only inspires him intellectually, but also artistically.

“The college I am aiming for, the United States Naval Academy, has an excellent drum and bugle corp and an acting group called the Masquerades that will both be excellent outlets for my creative hobbies.”

The decision to take this post-secondary route was influenced by the strong military background of his family. After a rigorous application process, Stocker has impressively earned an appointment to the Naval Academy with the endorsement of U.S. Rep. Brett Guthrie.

So as the last chapters of his high school career conclude, Stocker looks forward to continuing his current activities well after graduation, since they have “helped shape me for almost two decades”.

Undeniably, this creative and impressive young man enjoys challenging himself.

“I love all these things and continue with them because I am able to transcend myself.”

By EMILY BARRINGER Danville High School Many teenages hate reading. It’s almost impossible to get some students to read. This... read more