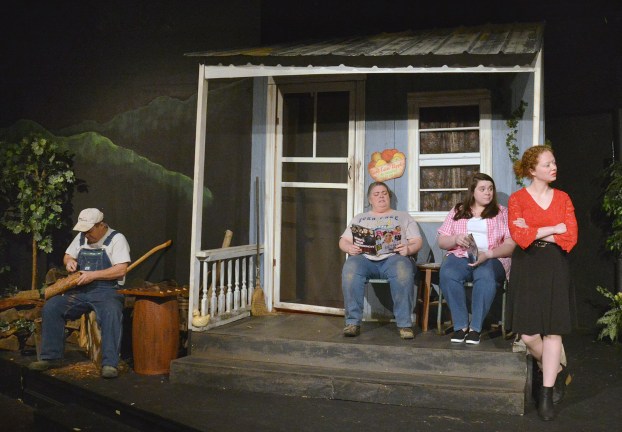 Friday, West T. Hill Community Theatre goes up with another Kentucky-inspired production by playwright Catherine Bush. “The Other Side of the Mountain” is an award-winning piece penned by Bush.

“And, she’s been a friend of the theater’s for many years. We’re always happy to put on her work,” says Kolton Winfield, who is the outreach coordinator for WTH and directing the production.

Winfield says the show is part of a trilogy of plays, which also includes a past production WTH put on, “The Quilt Maker.”

“But, audiences don’t need to worry if they missed ‘The Quilt Maker,’ though. No previous knowledge is needed to enjoy this show,” he says.

The show centers around the character of Evelyn Thacker, who returns home to the small Kentucky town of Mudcreek from graduate school in the big city, Winfield says.

“She may have lost her accent, but she’s gained some new secrets,” he says. “Don’t let that fool you though — her sister, Faye, and Mother, Jewell, have some secrets of their own. Through side-splitting antics and touching honesty, familial truths come to light, as the show looks at love and the various forms it takes.”

Cast in the play are several veterans of WTH’s stage, such as Beth Marlowe, Maggie Jenkins, Steve Rineheart and Jacob Johns.

But, Winfield says, there are some “phenomenal new comers,” such as Brad Logan, Ashley Crank and Lyndsi Hersch. “They’ve all risen to the challenge of pulling off a show that balances both comedy and drama.”

Winfield says the audition resulted in a great turnout. “It was a small group, but every one of them were very talented, which actually made casting the show a difficult task.”

Winfield says the show is rated PG-13, and contains some strong language and adult themes.

“But it’s perfect for anyone who wants to enjoy a night of hilarity and thoughtful storytelling,” he says. “This show is steeped in the imagery and feeling of life in rural Kentucky.”

This production is also Winfield’s first to direct, something he says has been a good experience.

“This cast has been very easy to work with and our stage manager  — Sid Woolcott — has been top-notch, all of which has allowed me to enjoy the process,” Winfield says. The cast and crew have all been patient and understanding, he adds.

“I really feel that community theater serves such a vital role in fostering the arts within a community, as well as building micro-communities around each specific production, that to be able to have such a hand in the process has been an honor.”

“The Other Side of the Mountain” goes up Friday through Sunday, and Feb. 15-17 at West T. Hill Community Theater. An award-winning play by Catherine Bush, this drama/comedy conveys a clash of cultures, shattered dreams and secrets best left alone. It reminds us that “once you’ve seen the other side of the mountain, you can never go back.” Performances are 8 p.m. Fridays and Saturdays and 3 p.m. Sundays. For tickets, visit westthill.net or call the box office at (859) 319-0205

Photo by Robin Hart Steve Rinehart, in the background, looks on as Jacob Johns speaks to Ashley Crank during a scene in “Over the Mountain”

Photo by Robin Hart From left, Maggie Jenkins, Brad Logan and Jacob Johns rehearse a scene from Catherin Bush’s “Over the Mountain.”

Photo by Robin Hart Lyndsi Hersch rehearses a scene in the play.

During his first official day of being president of Bluegrass Community and Technical College, Dr. Koffi Akakpo visited the area... read more