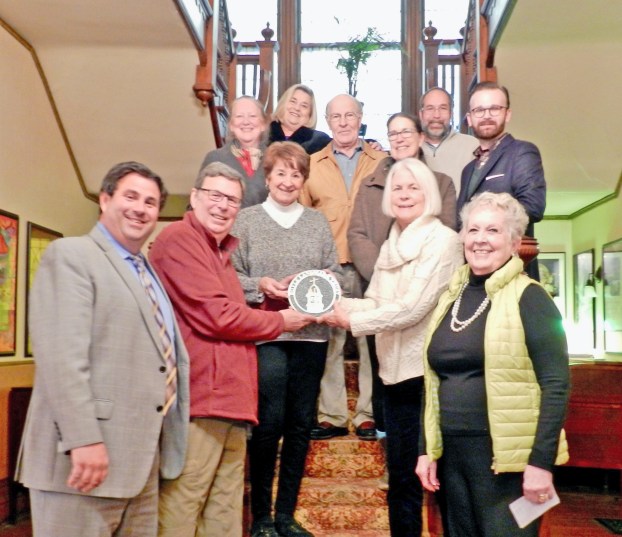 Photo contributed Greg and Linda Barnard received a bronze historical plaque from the Boyle Landmark Trust to mount on their 1897 Colonial Revival house on Lexington Avenue. 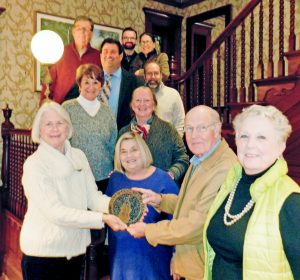 Photo contributed
Friends and board members of Boyle Landmark Trust gathered on the grand staircase to present a bronze plaque to Jan and Larry Scott for the 1891 Victorian-Queen Anne home.

Boyle Landmark Trust presented bronze plaques to two of Danville’s distinguished historical homes on W. Lexington Ave. Board members of the Trust and friends gathered in the grand entry halls of each house on a chilly winter afternoon to award the plaques and congratulate the owners. The two houses have been occupied since the late 19th century by noted Danville citizens and both are architecturally significant, retaining their elaborate Victorian features inside and out.

Greg and Linda Barnard purchased their three story Colonial Revival house at 229 W. Lexington Avenue in 1981. The house was built in 1896-97 by A. B. Rust. He was a merchant of dry goods and active in the commercial associations of the day. He and his wife Annie lived in Danville just five years, yet the property is still known as the “Rust House” after 123 years. The house has been the scene of many cultural and social events over the years.

Dr. Larry and Mrs. Jan Scott have occupied their Victorian-Queen Anne house at 207 W. Lexington since 1976. The house was completed in 1891 for Robert P. Jacobs, son of John Jacobs, the founding father of Kentucky School for the Deaf. Jacobs Hall at KSD was named for him. Robert Jacobs was a minister, an attorney, member of the first faculty of the Law School at Centre College, and delegate to the fourth Kentucky Constitutional Convention in 1891. Members of his family lived in the house until 1937.

The Boyle Landmark Trust makes the plaques available to owners of residential, commercial, or public structures in Danville or Boyle County that are at least 100 years old and display architectural or historical significance. For information see info@boylelandmarktrust.org.

Ann Deering of Stanford, right, is presented with a $100 gift card from The Advocate-Messenger by Brenda Townes. Deering won... read more