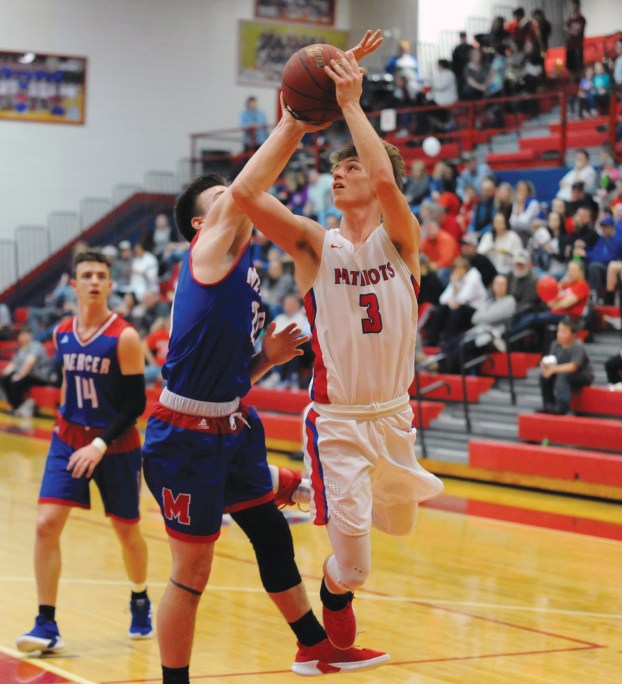 STANFORD — Two of the most dangerous teams in the 12th Region met at Lincoln County on Tuesday night.

It was the Patriots who put it all together to take down a surging Mercer County team 68-46 behind a 23-point performance from senior Blake Smith.

Mercer (15-9) had won 11 of its last 12 games while Lincoln (16-11) has split its last 12 contests entering Tuesday’s contest. But the Patriots took care of business on senior night with a dominant display on both sides of the ball.

“We defended really well and we played with a lot of energy and emotion, with it being senior night,” Lincoln head coach Jeff Jackson said. “It’s a very special group of seniors in both programs. I’m just really proud of our kids, we’ve been up and down with our focus and our effort. You want your seniors to go out on a positive note.”

The focus was there throughout the game on defense, as the Titans struggled with the Patriots’ 2-3 zone. Lincoln limited Mercer to eight first-quarter points, all scored by Kaelin Drakeford.

Mercer’s defense was strong as well in the first half, and Josh Hamlin’s squad trailed 24-17 at the break. Hamlin said missed opportunities near the rim hurt his team.

“We knew the zone was coming and prepared for it,” Hamlin said. “We played last night but that’s not an excuse. I thought we played a really, really bad first half, and we went into halftime down seven. We were 5-of-24 from the field in the first half and we probably missed 7-to-10 five-and-in footers. You make half of those, you’re up three or four.”

The second half opened with a flourish, as both teams ran the court and saw shots from beyond the arc hit the bottom of the net.

But Lincoln again would crack down on defense and limited Mercer to just two made field goals — both threes — in the third quarter.

“Our kids played really hard and we’ve got to try and play that hard all the time,” Jackson said. “If we do, maybe we can put this thing together. We’ve just been inconsistent with our effort, but tonight we had a really good effort on the defensive end, we got contributions from a lot of people. Our energy level was high and our focus was good.”

Blake Smith and Baylor Mattingly connected on threes and helped Lincoln extend its lead to 44-30 after three quarters.

“It was just one of those things, we probably let the score get away from us there at the end,” Hamlin said. “I told our coaching staff prior, if we get in one of these games, we’ll use it as a late-game situation, make teams make free throws and try to prolong it. We started doing that but it was a frustrating night, a humbling night. All credit to coach Jackson’s staff, they do a great job. They were ready to play. We just got our butt kicked tonight.”

Lincoln will host the 12th Region boys basketball tournament this year, but Jackson isn’t thinking about that. His team finished against Mercer with 24 fourth-quarter points and he hopes his team can finish the regular-season with similar gusto.

“I hope we can get there, we’ve got to get there,” Jackson said. “We’ve got to get ready for Danville on Friday and that’ll be an emotional game, really good. They’ve got a heck of a team. We’ve got our work cut out for us, we just need to try and get better, get everybody healthy and keep our head up and keep working.”

For the Titans, Hamlin said that the game isn’t one that will define their season.

“I think three years ago around this time, our girls got humbled by Butler pretty good,” Hamlin said. “They beat us, but it really helped us get our mind right to win a state championship. You can definitely win a region, have a successful season and have a game like this on Feb. 5. That’s not going to define us.”

Franklin County comes back to beat Danville in overtime

By LINDA YOUNKIN linda.younkin@state-journal.com FRANKFORT — In a game of runs, Franklin County’s boys basketball team had the last one,... read more