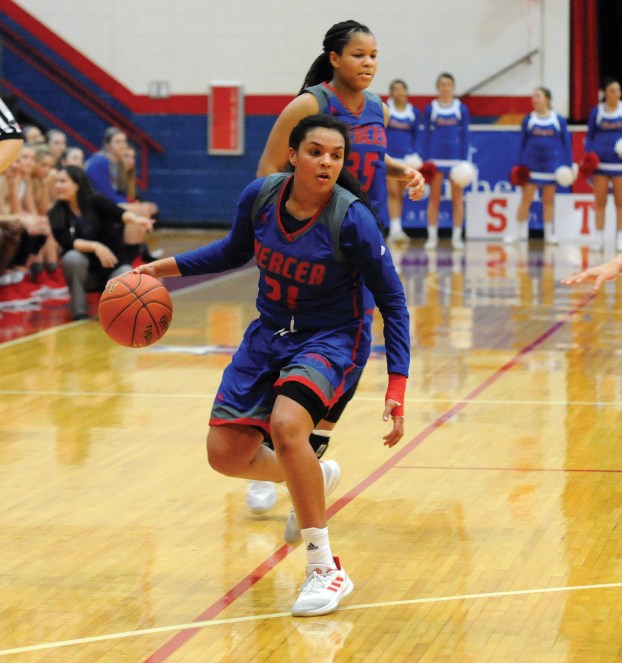 STANFORD — The 12th Region champion will have to go through the two-time defending state champion.

Mercer County made a statement Tuesday night, beating top-five Lincoln County in Stanford, 64-60. The Titans stay undefeated (8-0) in 12th Region play, while Lincoln falls to 20-5 and 8-2 in region play.

“They’ve been pretty excited about this game,” Mercer head coach Hayley Spivey said. “My biggest thing this season is to just compete, and that’s what they did tonight. We got down 14 at one point and we didn’t give up. We just kept fighting back, kept chipping away at it.”

Lincoln County controlled the pace and play of the game for the majority of three quarters. The Patriots led 6-0 after four minutes of play, and every time the Titans made a run, Lincoln would respond. Lincoln led 32-23 at halftime and 47-39 after three quarters, but Mercer’s fourth-quarter run didn’t get a Lincoln response.

“I felt like we’ve turned a corner here, we didn’t shoot the ball well tonight and they sat in a zone most of the game,” Spivey said. “It took some fortitude for us to run our offense, it was slow moving a little bit, getting into that attack mode. It’s four players one day and four another day, and that’s what it takes to be a good team.”

Tuesday’s contest was Channing Lewis’ night to shine: Lewis scored 11 of her game-high 22 points in the fourth quarter, including one four-point play after hitting a three through contact.

Lincoln’s game slowed in the fourth quarter after a strong start, and that’s something that head coach Cassandra McWhorter has addressed with her team.

“We started the game strong and we’ve done that for awhile now, we’re starting really, really strong but we’re not putting a full four quarters together,” McWhorter said. “Last couple of games it has been our third quarter, whether it’s defensive letdowns or not scoring the ball. Tonight it was the fourth quarter that got us, we went cold and our defensive intensity dropped a little bit. We’ve got to learn to push through and keep our defensive intensity high when the ball’s not going in the hole.”

Emma King led Lincoln with 14 points in the second half and had 18 for the game, same as teammate Kaitlynn Wilks. But the Patriots had just three players (King, Wilks and Maddy Boyle) score in the fourth quarter.

“That’s a tendency with any team and I think a lot of coaches struggle with it, when the ball isn’t going in, how do you keep your intensity up and how do you get your girls to do other things besides worrying about the basketball,” McWhorter said. “We were talking about it with them, they’ve got to find a way on the floor, come together and do the little things. And we as a coaching staff have got to find a way to make sure we do those things as well.”

It was senior night for the Patriots, who honored King, Wilks, Boyle, Anna Lane and Zaria Napier in the final home game of their careers. McWhorter said it wasn’t the ideal senior night, but the year is far from over.

“It’s not how you wanted to end the careers of five special seniors on their home floor, it’s not how you want it to end for them,” the coach said. “The good thing for them is that they’ve got more games, it’s not ending your season. They’ve played enough basketball, they’ll bounce back from this and use it for motivation and rally the troops. They’re veterans and they’ve played a lot of basketball. They’ll get it figured out and we’ll be ready to go in a couple of weeks come tournament time.”

STANFORD — Two of the most dangerous teams in the 12th Region met at Lincoln County on Tuesday night. It was... read more