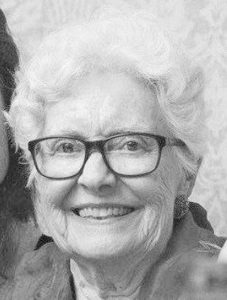 Rosemary Thurman Hamblin passed away peacefully on Saturday morning, February 2, 2019, at McDowell Place in Danville, Ky. Rosemary, the daughter of the late Sarah Elizabeth and Stephen Livingston Thurman, was born on August 25, 1929, in Hodgenville, Ky.

Rosemary spent her childhood in Lexington, Ky., where she graduated from Lafayette High School in 1947. She then attended Centre College in Danville, where she majored in English and sang in the school choir. After graduating from Centre, Rosemary became a stewardess for Pan American Airways and American Airlines and met her husband, Robert “Bob” Hamblin.

Bob and Rosemary had three wonderful children, Robert Nelson Jr., Elizabeth Leigh, and Mary Ann. After her husband Bob’s death in 1968, Rosemary continued to raise her children in Danville and taught second grade at Jennie Rogers Elementary for 25 years. She also co-founded “The Tea Leaf” restaurant in 1990. In recent years she was a dutiful member of the PEO Sisterhood and the Retired Teachers Association, worked with CASA of the Bluegrass, and was a docent at the Historic McDowell House Museum. Rosemary was very active in the First Christian Church community and enjoyed leading bible study, singing in the choir, and playing handbells. She was very passionate about her faith, and dearly loved her church family.

Rosemary was preceded in death by her husband, Robert Nelson Hamblin of Tupelo, Miss.; her parents, Stephen and Sarah Elizabeth Thurman of Danville; and her youngest brother, Stephen Phelps Thurman of Colorado Springs.

Rosemary was the type of person you meet once in a lifetime. She had the ability to fill an entire room with warmth in an instant and her generosity, intelligence and grace were unparalleled. Rosemary, we know where you’re going and we’ll see you there. Your peaceful rest is well deserved. We will love you forever.

Visitation will be held from 4 – 6 p.m. on Friday, Feb. 8 at Stith Funeral Home, Danville. The funeral service will be held at 11 a.m., Saturday, February 9, 2019 at First Christian Church, Lexington Ave., Danville. Rev. Joey Pusateri will officiate. A private burial at the Red Hill Cemetery in Hodgenville, Ky., will follow.

Memorials donations are suggested to First Christian Church of Danville or the Elizabeth Thurman Library Fund at the Danville Public Library. The online guestbook is available at www.stithcares.com.