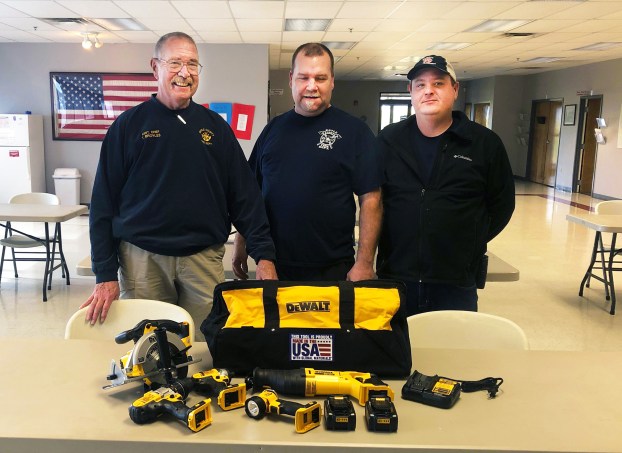 Photo contributed Boyle County Fire Asst. Chief Tony Broyles, Lt. Robbie Milburn and Firefighter J. Followell are all smiles posing around one of the sets of tools donated to the Boyle Fire district on behalf of DeWalt Tools.

The Boyle County Fire Department received a surprise last week. On Feb. 1, a large truck pulled up to make a delivery; they saw “a whole pallet full” of boxes inside.

Chief Donnie Sexton said the boxes contained $3,500 worth of new tools. “We didn’t even know it was coming — it was a total surprise.”

The kits are used on each truck, and contain reciprocal saws and drills, among other things, which are equipped with rechargeable batteries for on-the-scene emergencies.

After the department realized the batteries in its existing kits had died, they contacted the DeWalt tool company to find out how to go about ordering new ones.

Sexton let the company  know it was for a fire department, inquiring about any deals or discounts they could receive on the new batteries. 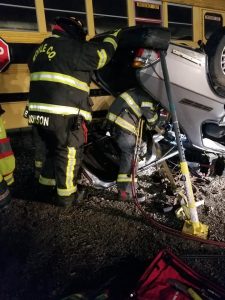 Photos courtesy of Boyle County Fire
Training was recently held with Boyle County Fire crews, in order to work through the scenario of car versus school bus. Firefighters often use multiple, battery-operated tools in order to perform extrications when hydraulic cutters are not available, or not able to be used due to the type of emergency. Oftentimes, specifically-sized blocks of wood must be sawed out on the scene in order to place under the vehicle and stabilize in, preventing further injury to any occupants caught inside.

“We needed 18 of them. The person at the company said they have a grant program that’s rarely used, and sent us a sheet of paper to fill out,” Sexton said. But, instead of receiving those replacement batteries, the company donated seven new sets, priced at $500 each to the cause.

“They just sent them to us, said here’s one for each of your stations and thanked us for using their tools,” he said. “They just wanted to help our community out. For corporate American to just send you something like this … All we asked for was a break on new batteries. And they said no, you all need new tools. It’s really awesome.”

With estimated shipping costs, Sexton said the company basically contributed $4,000 to the department.

The general public probably doesn’t realize how important these types of tools are to firefighters, Sexton said. They use them for rescue calls, such as a past situation where a man had his limb caught in a piece of farm equipment.

“Or if you’re trapped in a car with your foot underneath the brake pedal, for instance, we can take all those things off of the car without further injuring the patient,” he explained.

Asst. Chief Jimmy Coffman — who Sexton refers to as “my rescue guy on that end” — is over all of the county stations in the western part of Boyle County. Coffman said having “brand spanking new tools” with the latest technology is a priceless gift.

“These are of the utmost importance to us. It really allows us to be multi-faceted,” Coffman said. For instance, hydraulic cutters — commonly called the jaws of life — are also necessary at times, but they are heavy and bulky to use, not to mention expensive, which means the department is limited on how many they have.

“It sounds funny, why would firefighters need to use a skill saw,” Sexton said, but explained it in terms of a school bus crash. To safely remove occupants, the bus may need to be stabilized — what they call “cribbing” — by sawing out specifically sized blocks, and putting them under to stop it from moving.

“We cut plywood with them to use on a trench that’s fallen in … There’s just so many things we use them for,” Sexton said.

The saws can also be used to cut out car roof flaps if the hydraulic cutter isn’t available. Although a reciprocal saw may not be able to do quite everything that hydraulic cutters do, the two men say they can aid firefighters in expediting extrications.

“We use them both together a lot. If we only have one set of cutters on the scene, we can send the other firefighters to the other side of the car and use the reciprocal saw and do almost the same thing,” Coffman said. “We can have both teams on the car at the same time.”

Coffman tells stories of patients being rescued when limbs were caught in a corn grinder, or a hayroller — which smaller tools like what’s in the kit are better for. However, fighters don’t like to use the term “cut them out,” Coffman said.

“We like to say we cut the material away from the patient, because that’s what we’re doing.”

The sawzall is also used for windshield removal, by using a heavy-duty extrication blade in it.

The department trains with the tools just as they do with any other fire fighting equipment. Coffman said Airport Road Salvage Yard and Sawyers Garage and Towing, out of Parksville, are big friends of the department.

“We are lucky enough … they have wrecked cars that are totaled and given to them, and instead of salvaging them, when we reach out, they’ll bring three cars to us at headquarters in our gravel area behind and we’ll cut those apart for practice,” Coffman said.

“We set up where a car had driven underneath the bus — which the Boyle Board of Education donated the bus for. We simulated rescues inside of the bus, practiced cribbing them …” he said, referring to the wood being placed underneath. “We want to make sure the vehicle is stabilized so it can’t rock so, for example, your neck stays exactly where it should be. We make the situation better versus doing damage to the patient.”

And, these tools, he said, help them do just that — they are a link to saving lives.

“When you see us getting that stuff off the truck, the tools, we’re looking out for the wellbeing of our patient.”

Boyle County Fiscal Court hasn’t entered into its annual budgetary talks yet. However, a rumor has already begun to circulate... read more