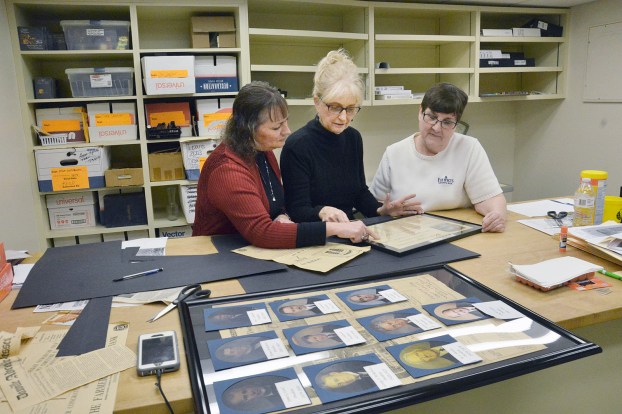 Farmers National Bank Vice-President, Director of Marketing Sharon Howell, left, looks at a document that retired bank employees Pat Short and Debbie Lowe have been working on in preparation of an historical display of some of the bank's artifacts which will be on display throughout the rest of the year. The bank is celebrating its 140th anniversary. Photo by Robin Hart

For 140 years, Farmers National Bank in Danville has been involved in growing a prosperous community by helping its residents build their lives, homes, schools and businesses. To celebrate this milestone, an historical display of artifacts found in the bank’s several 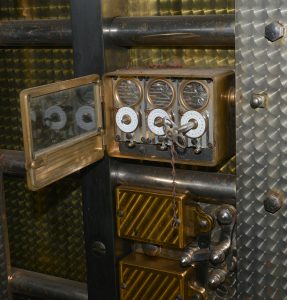 This old vault door was automatically set to open in the mornings and lock in the evenings after business hours by using a special key that was discovered hanging near the door. Photo by Photo by Robin Hart

basements and vaults will be set up in the main lobby all year, beginning today. A book of the bank’s history is in the works, and celebratory events are planned from May through October at the bank’s locations within Boyle, Garrard, Lincoln and Mercer counties.

On Feb. 10, 1879, the bank’s initial stockholders received official notification from the Office of the Comptroller of the Currency, that the bank was authorized to open its doors for business, according to Sharon Howell, the bank’s vice president, director of marketing. “Think back to the 1870s and 1880s and all that was going on, and how we’ve been a player and helped the town and the whole county grow and prosper,” Howell said.

To help put FNB’s anniversary in perspective, in 1879: Thomas Edison filed his first patent application for “the first practical incandescent lamp”: Frederic-Auguste Bartholdi was awarded a patent for his design of the Statue of Liberty; the first 5 & 10 cent store was opened by Frank W. Woolworth; and Rutherford B. Hayes was president of the United States.

For several months, Howell, along with retired bank employees, Debbie Lowe and Pat Short, has been digging through the dark, musty corners of basements under FNB’s buildings along Main and Third streets and have found several treasures that will be put on display, Howell said. Hidden away inside an old vault were a couple of large trunks filled with documents and black bags, resembling antique doctor’s medical satchels, are still filled with empty cloth money bags. And a large tin bread box with a padlock was found with its lid pried open, Howell said.

The women were really intrigued when they discovered the key to a timer of one of the vaults, she said.

In the stacks of old ledger books, while researching items for the lending area, bank employee Linda Dunn found the original 1887 deed to the Main Street property and Lowe and Short discovered the bank’s articles of incorporation. They also found pages of beautifully handwritten signatures of original stockholders and the bank’s 1880 statement of condition, Howell said.

Other keepsakes they’ve uncovered include drinking glasses celebrating the bank’s 75th anniversary, and a man’s necktie depicting dollar bills, including a $1,000 bill, which hasn’t been printed since 1945 and officially discontinued in 1969.

There are also handwritten bank minutes from the early 1930s during the Great Depression that described how the board of directors decided not to construct a new building, Howell said. “They decided because of a drought plus the depression, they thought it would be better to help the local economy with the farmers. … They rather lend money than spend it,” Howell said.

“I get emotional. You’re bringing those people here back to life … I get goosebumps. You have this feeling from beyond that they’re saying, ‘Oh, you’re keeping up with our history,’ which we have for 140 years,” Howell said.

The artifacts will be safely on display during regular business hours inside locked glass cabinets, along with old photographs and framed original newspaper front pages with headlines touting FNB’s growth.

Howell is also asking the public to loan any FNB memorabilia they may have tucked away, to help tell the history of the bank.

She said all items that are loaned will be tagged and returned to the owners. However, if they choose to donate the items, they will be kept in a vault for preservation, she added.

In 10 years, the bank will be celebrating its 150th anniversary and Greg Caudill, FNB chief executive officer said he wanted to begin collecting the bank’s history and artifacts now as part of his legacy. “It will be a much bigger anniversary in 10 years. … This is a pre-game for that,” he said laughing.

Howell said through additional research for celebration and for the book, Lowe discovered FNB began operating in space right on Main Street where the newer building is located. She researched an 1880s map of Danville through the Library of Congress, and discovered “Some of our folks are actually sitting in the front door of where it all began.”

“It’s unheard of a business to be here for 140 years, in the same place and kept the same name,” Howell said.

The original shareholders and how many $1 shares they owned of Farmers National Bank are listed in this 1879 document which will be on display in the main branch’s lobby in celebration of the bank’s 140th anniversary. Photo by Robin Hart

This old bread box was found in the basement of Farmers National Bank. Someone’s personal banking papers had been locked inside for many years. At some point in the past several years, someone had pried up the lid to discover its contents. Photo by Robin Hart

A black satchel is still full of old cloth money sacks that were once used to transport cash to a federal reserve bank in Louisville. Photo by Robin Hart

The original 1879 Organization Certificate for Farmers National Bank was discovered among the many ledgers that are stored in the bank’s basement. The bank has worked from its location on Main Street since it began in 1879. Photo by Robin Hart

Debbie Lowe, left, Sharon Howell and Pat Short show the vault’s timer key they discovered hanging near the vault in one of the basement areas of Farmers National Bank on Main Street while they were researching the bank’s history. Photo submitted
You Might Like