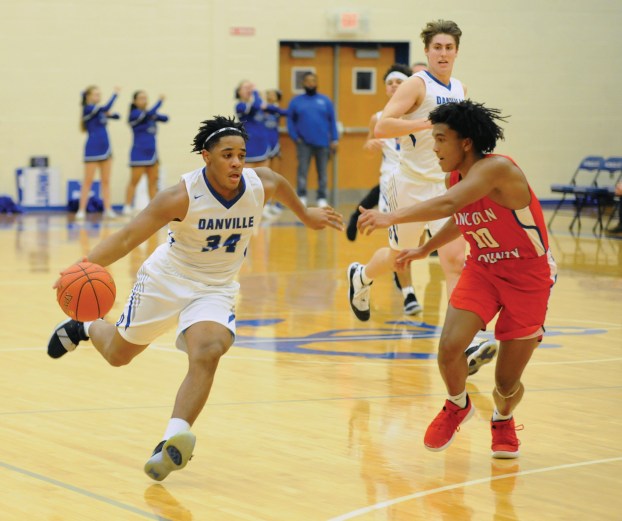 For the first time in more than 20 years, Danville boys basketball has swept the 45th District in the regular season.

The Admirals got off to a hot start Friday against Lincoln County and kept the Patriots at a comfortable distance the rest of the game, winning 68-62.

Danville (23-4, 6-0) is enjoying its best regular season in the past two decades, but the Admirals were coming off two losses for the first time all season on Friday night. Danville lost at Franklin County and at Frankfort earlier this week.

Danville came out hot against the Patriots, taking a 20-13 lead after one quarter thanks to 14 points in the first quarter from Dante Hayden.

“We got off to a terrible start. We let Hayden get loose, he had 16 in the first half. You can’t lose him,” Jackson said. “We lost him once in transition, once in the zone we didn’t get out on him. We weren’t real active in our zone.”

Between Hayden’s hot shooting and Danville’s interior passing, the Admirals worked Lincoln out of its 2-3 zone in the first half.

“We played it well, I thought we did a nice job for most of the first half. Right off of the bat, got it to (DeShaud St. Martin) in the short corner, they kind of overcommitted and we threw it behind them for a layup for Zach (Thornton). We threw it over the top some, then Dante obviously shot them out of it.

“Some of that is individual effort, he’s a good shooter, good scorer and when he gets going like that, it’s hard to stay in. When we’ve got bigs behind them making plays and Dante shooting the three, if we’re shooting the ball, we’re pretty tough in zone.”

After Danville’s early lead, the Patriots just couldn’t cut it enough. The Admirals led the rest of the game, and every time Lincoln would make a run, Danville would respond.

“They got off to a great start, we couldn’t get closer than five,” Jackson said. “We got it down to five a couple of times and couldn’t get a stop. We’d miss a free throw, miss a layup, unforced turnover, poor decision. Never could get that thing down to where we could really, possibly make something happen. We missed nine free throws. We missed a lot of shots around the basket, we got outrebounded by 10. We made poor decisions, poor passes. We just could not get that thing under five. We had some chances, but against a team as good as they are, you’ve got an opportunity to capitalize and we didn’t do that.”

After Hayden’s hot start to the game, Thornton (14 points) and St. Martin (12) points stepped up for the Admirals. Hayden finished with a game-high 21 points.

Jaxon Smith led Lincoln with 19 points. Blake Smith and Elijah Frye each had 11 points for the Patriots.

It took four extra minutes, but the Danville girls did something Friday night that no other 45th District team has... read more