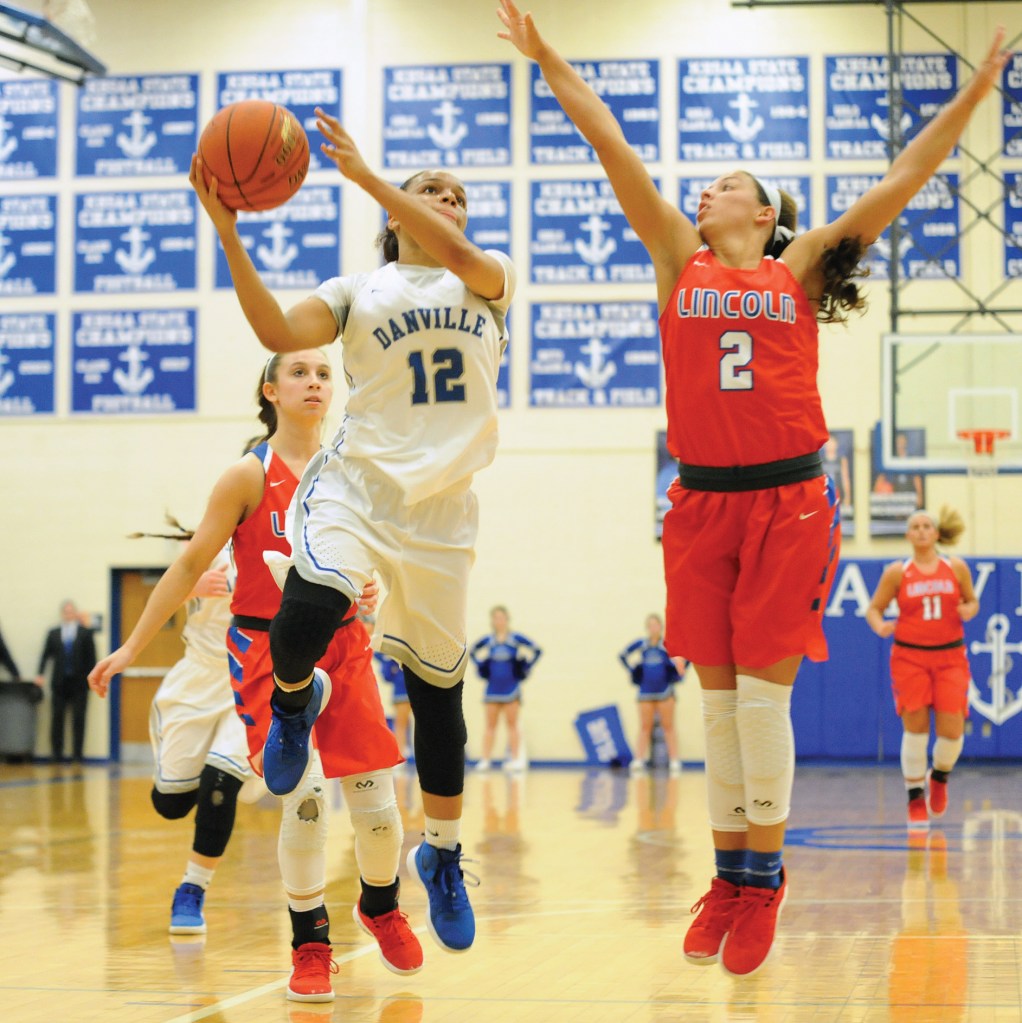 It took four extra minutes, but the Danville girls did something Friday night that no other 45th District team has done this season, handing Lincoln County its first district loss.

“That was a good high school girls basketball game – pure basketball,” Danville coach Judie Mason said. “No matter who won, it was possession. Whoever had the ball last was going to win the ballgame.”

After leading by as many as six points in the first half, Danville (21-4, 5-1 45th District) found itself trailing by six early in the

Lincoln (20-6, 5-1) answered with its own run, using a 10-5 scoring edge to deadlock the game at 58-58. And the fight was on. The lead changed hands eight times over the remainder of regulation but the game remained tied, 81-81, as the horn sounded on the fourth quarter.

Danville never trailed in the overtime period securing the win with a 7-4 finish.

The Lady Admirals utilized the combined 70 points from their team’s starting backcourt to help earn the win. Senior guard Ivy Turner burned the nets for a game-high 44 points while sophomore guard Jenna Akers poured in 26 points, including eight 3-pointers. Turner’s 44 pushed her to the top of the Danville girls all-time scoring list as she now has 2,313 points. Mason presented Turner with a basketball following the win to recognize the milestone.

“Jenna can shoot the ball,” Mason said. “She went through a struggle in the All ‘A.’ Usually it’s her twin, Lara, that’s hitting all the 3’s. She’s our leading 3-point shooter and top 5 in the state. But tonight it was Jenna hitting. I didn’t change uniform numbers – that was Jenna.”

Mason said Turner’s demeanor made it hard to tell she had just pumped in 44 points.

“She’s the most humble kid I’ve coached in 31 years,” she said. “She is the best kid that I’ve probably ever coached. She’s the best teammate. I’ve never seen her mad. I’d like to get her mad sometime. You can see she gets knocked down and she gets up and goes to the foul line. They block it on her and she shows no emotion. You wouldn’t know if she had 44 or four. She never puts on a show out there that’s not basketball.”

“Ivy had a heck of a ballgame. She’s a great athlete and brought her ‘A’ game tonight,” McWhorter said. “Jenna didn’t do that much against us the last time. It was more Lara, her sister. Lara is the second leading scorer on their team but Jenna stepped up and had a huge game tonight. You have to credit her.”

Lincoln had the first lead of the night, with Emma King, who had a team-high 25 points, hitting the game’s first bucket. Turner would answer on the opposite end with a bucket in the paint then Jenna Akers drained her first 3-pointer to put the Lady Ads up 5-2. They held onto the lead the rest of the first, up 26-23 at the end of the period.

Danville held to its lead until just 1:12 remained in the first half, with Lincoln’s Kaitlynn Wilks, who finished with 18 points, going inside to edge the Lady Pats ahead 37-35. Turner would tie the game at 39-39 with two free throws late in the second quarter but Trinity Shearer sank a free throw with just 1.6 seconds showing to make it 40-39, Lincoln, at the break.

Shearer would be one of five Lady Patriots getting in double figures in the game. She had 11 points for the night. Maddy Boyle followed behind King and Wilks with 14 points and Zaria Napier had 13 points, including nine points from 3-point range.

The Lady Patriots extended their lead to 48-42 early in the third after two 3’s from Shearer and Boyle and a King bucket before the Lady Ads surged with their 11-0 run. Lara Akers opened the run with a trey and Turner followed with six straight points before Akers hit from 2-points out for a 53-48 Danville lead.

Lincoln’s offensive response would erase the Danville lead. Anna Lane and Shearer both hit 3’s in the 10-5 run, with Shearer’s triple tying the game at 58. Wilks scored on a hook shot with 12.2 seconds left in the third to put Lincoln on top 62-61.

The lead changed hands eight times in the final frame. Napier drained a 3-pointer for Lincoln with 32.4 ticks left in the fourth quarter to put the Lady Pats ahead 81-78 for the final lead change only to have Lady Admiral Jenna Akers bombing in her own triple to force the overtime.

Turner tallied the first two points of the overtime at the foul line to put the Lady Ads on top for good. She had five more points in the extra period as they outscored Lincoln 7-4.

“This one’s a tough one to swallow,” McWhorter said. “You look at the stat line and we’ve got five kids in double figures. We take more shots than them. Our field goal percentage is better than them. The biggest thing that stands out to me is too many offensive rebounds. We can’t give up 16 or 18, or however many it was. That’s way too many offensive rebounds that we gave up. You know, you hold them and then you give them that second chance or third chance, and they’re going to the free throw line or scoring out of that. That is an area that we’ve got to improve moving forward.”

Danville edge Lincoln on the glass 42-39 with 18 offensive boards. Lincoln had 15 offensive rebounds.

Despite the loss, McWhorter said her team left the locker room with heads up.

“We’ve regrouped already in there,” she said. “The girls are already refocused and ready to get ready for next week, as crazy as that might sound. Positivity is high and it’s got to stay high. We’ve got to block everything out and come together as a team.”

“I still think Lincoln is the best team in the region,” said Mason. “I think both teams played well tonight, and it wouldn’t bother me a bit to play Lincoln two more times – in the district final and the regional final.”