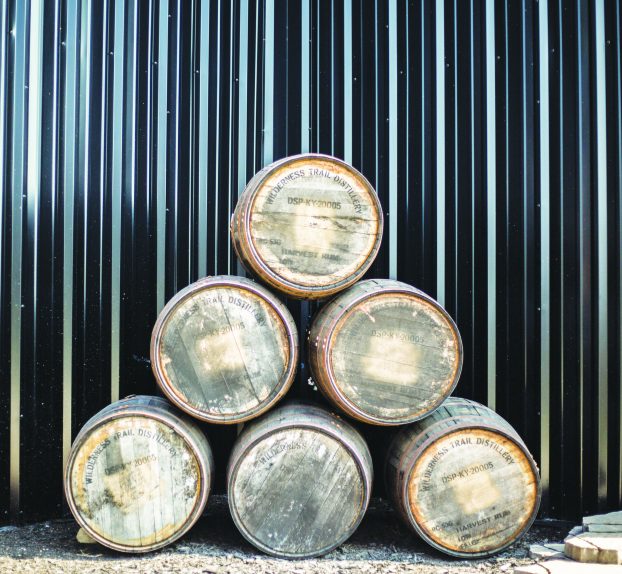 According to the Kentucky Distillers’ Association, the bourbon industry has resulted in $8.6 billion added to the state’s yearly economy, generating more than 20,000 jobs and $235 million in local and state tax revenue.

Locally, Wilderness Trail Distillery definitely has contributed to those numbers. Co-owner Shane Baker said when he and Pat Heist began Ferm Solutions 13 years ago — providing research, product development, engineering and technical services to the ethanol and distilled spirit industries — they had meetings in a hallway, with three employees.

Then, they opened the distillery in 2012.

“Now, we have to schedule that across three shifts, weekends and try to get everyone in the same place at one time — it’s a challenge,” Baker said, but a welcome one. The company is now 40 employees strong, with 28 of those supporting the distillery’s 220 barrels per day of production, Baker said, with the majority of employees residing in Boyle County and the remainder in adjoining counties. 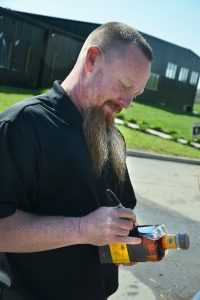 Pat Heist, co-owner of Wilderness Trail Distillery with Shane Baker, signs a bottle of bourbon on the first public release of their bourbon. File photo by Robin Hart

The distillery hosted 56,000 visitors over 2018, showing just how big bourbon is getting.

And that industry growth is continuing — the industry is still in the middle of a $2.3 billion building boom. Which brings up the question: Is there a threat of market saturation?

“We definitely have discussed that we should never put all of our eggs in one basket,” said Jody Lassiter, president and CEO of Develop Danville, the Danville-Boyle County Economic Development Partnership. He says development efforts in Boyle County “have been blessed” by a diversified economy.

“And a lot of that comes from the earlier policies of the Boyle County Industrial Foundation,” Lassiter said.

He uses the 2008 downturn of the automotive industry as an example. “We didn’t have that huge of an impact as other communities did; we have a well diverse base.”

He says sure, there’s definitely room for further growth, which is welcome in the local distillery business, but “we still have to be mindful that there’s a point at which we need to not put too much investment from distilleries into our community.”

After Wilderness Trail Distillery set up shop, now Luca Mariano Distillery is next in line. It’s owner, Francesco Viola, said he has a 12-year plan that involves between $20 million and $50 million of investment in a 240-acre property, involving restoration of the historic William Crow House to serve as a visitors center, rickhouses, a bottling facility, a restaurant and cabins for overnight visits.

“And, IJW was our third,” Lassiter said, referring to the whiskey company which has begun its building of up to 17 rickhouses, a distillery and a presentation center office on land off Lebanon Road, near Wilderness Trail.

KDA says the number of distilleries in Kentucky has more than tripled to 68 in the last decade.

“Wilderness Trail and IJW are part of those numbers, from 19 to 68 distilleries,” Lassiter said. He said Danville and Boyle County has been a big part of that because the area is “strategically located at the crossroads of the Bourbon Trail. All of the major ones are north of U.S. 127 and west of U.S. 150. We’re at the crossroads.”

“We are the outlier, it seems,” Baker said.

It’s a chain effect, he said.

“We are different; we have our own terroir here in Boyle County,” Baker said, explaining that the water, soil and climate are “allowing some of the best Kentucky whiskey to be made right here, and we should be proud of that.”

Lassiter said the EDP does keep an eye on the impact of tariffs from Asian and European markets, of course. “But Gov. Bevin has taken the position he doesn’t think it will impact the bourbon market or those international purchases because if they like the product, they will be able to pay more, and will.”

Baker said on the larger scale, Wilderness Trail is still not concerned.

“The global market is incredible — they want Kentucky bourbon whiskey,” he said, and added there are towns in other countries larger than the state of Kentucky. “So we really haven’t begun to support the demand in the market around the world … It’s not easy to do that. You have to have good-aged bourbon, and that takes time.”

The distillers’ association also says the number of counties with a distillery in the past 10 years has quadrupled to 32; and there are now nearly two barrels of spirits for every person in the Commonwealth — valued at $3 billion, three times more than 2009.

Of course, with any boom there’s potential for a bust.

“When I look at the brewing industry — all of the small brewing companies and beers that have materialized since Sam Adams being one of the first — there wasn’t a bust … So it just makes it a more competitive market,” Lassiter said. “You walk into any kind of store, you’ll see Budweiser, Coors, Miller, but also a whole host of smaller-company, speciality beers that have been produced, with their share of the market as well.”

“There’s definitely been a renewal of interest and taste in bourbon. Back years ago, bourbon wasn’t even considered — it was scotch or Irish whiskey, everywhere you go,” Lassiter said, but now premium Kentucky bourbons are in every bar or restaurant he visits all over the nation.

Baker said when they began Wilderness Trail, they had their sights set very modestly, with a hope of local impact “at best. It was a crowded market out there.”

Lassiter said he’s not surprised with the popularity of bourbon, or of Wilderness Trail’s bourbon — Baker and Heist had the right research chops, connections and passion to do it.

“The only thing that’s surprised me is that in a matter of five years, they’ve gone from being a start-up at Roy Arnold Boulevard to being the 14th-largest distilling operation in the U.S.”

Baker said they were confident in what they set out to do — strive to make some of the best whiskey in Kentucky — but they had no concept that the brand would grow so fast internationally.

“It has just been an amazing journey, and we are happy that our community is part of that growth, and realizing the return here locally.”

According to the Kentucky Distillers’ Association study:

• Distilling contributes $8.6 billion to Kentucky’s economy, a 60 percent increase since 2009. 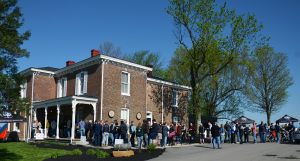 • Distilleries are in the middle of a $2.3 billion building boom, nearly twice the projection from the previous study in 2017.

• The next wave of investments are projected to create 1,800 new jobs, $70 million in payroll and $8.4 million in tax revenue.

Distilling has the second-highest job multiplier in the state when it comes to total number of jobs and spin-off factor, behind only light truck and utility vehicle manufacturing.

• If the industry continues to grow at this rate, economic output will exceed $10 billion by 2020, with employment more than 24,000 and payroll over $1.2 billion.

• Kentucky’s excise and wholesale spirits tax rate is fifth-highest in the country among open market states and twice the rate as Tennessee.

• More than $235 million in tax revenue for local and state governments is generated by spirits production and consumption, an 88-percent increase since 2009.

• Distillers paid a record $23 million in barrel taxes in 2018 to fund local schools, libraries and other community needs. That’s more than double ($10 million) from a decade ago.

• The tax-assessed value of aging barrels is now $3 billion, triple the value in the last 10 years.

• The number of distilleries has grown to 68, a 258 percent increase in the last 10 years.

32 Kentucky counties have at least one distillery, up from only 8 in 2009.

• Kentucky exported more than $450 million in Bourbon and other spirits in 2017. The export value has tripled in the last 20 years.

• KDA distillers bought more than 9 million bushels of corn and other grains from Kentucky farmers in 2017, more than half of all distillery corn purchases.

LEGISLATIVE RESEARCH COMMISSION News release FRANKFORT — A Danville woman, who survived an assault when she was a 30-year-old graduate... read more