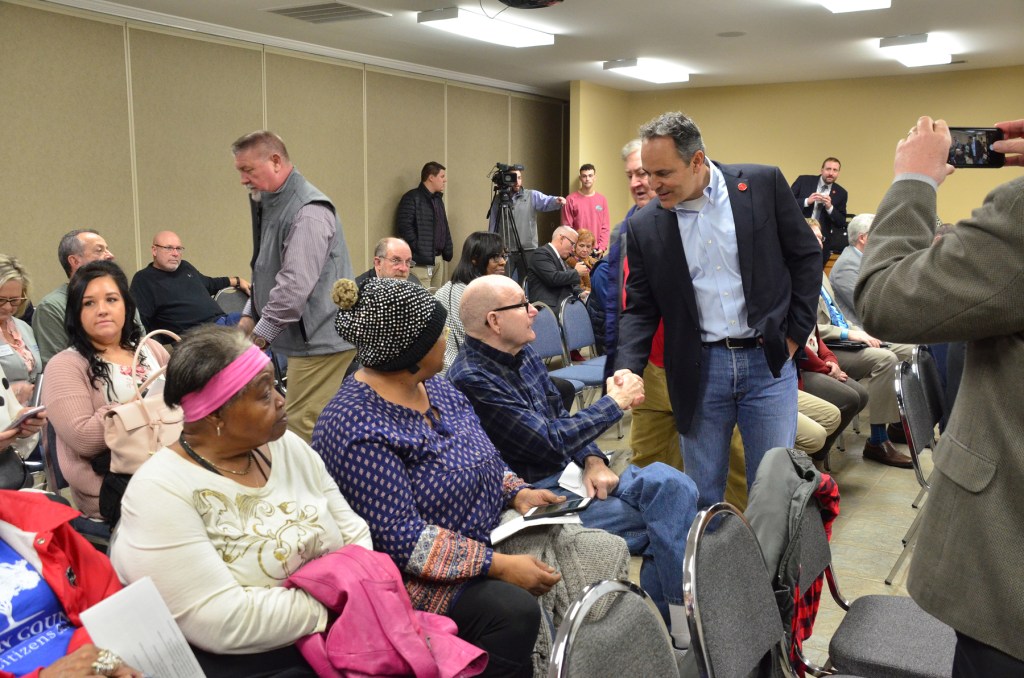 STANFORD — On Tuesday, Gov. Matt Bevin warned Lincoln County residents there probably won’t be any “relief” for local government budgets as Kentucky continues to work on a solution for its pension systems’ debts. 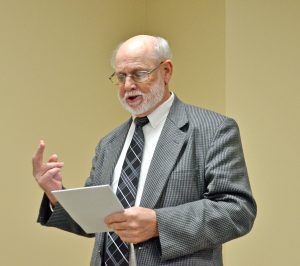 Jerry Shelton was one Lincoln County resident who addressed Gov. Matt Bevin at Tuesday’s the forum.

Bevin stopped in Stanford Tuesday for an open forum with local residents at the Lincoln County Extension Services office.

After Lincoln County Chamber Director Andrea Miller introduced Gov. Bevin, he stepped to the podium and addressed several issues raised by the crowd of approximately 35 local citizens and officials.

The hot topic of the day was the question of pensions, raised by Lincoln County Magistrate David Faulkner.

“I think what’s on the minds of most local officials is the pension issues,” he said. “We as a county are looking to the state to give us some kind of relief because the demand that is coming down on us is almost more than we can bear, frankly. Without us increasing our revenue, there is no way for us to handle it. We’ve cut services. We’ve cut about everything we can. And I know it’s the same in the other 119 counties. Can you give us an update on that?”

“I haven’t heard that anywhere else,” Bevin quickly joked as laughter filled the room.

“The money just isn’t there to meet the public obligation. What is the resolution? Because there is no magic pot of money, not at the county level, not at the state level,” he said. “The only place you get money for anything that funds anything for these cabinets — any roads, any education, any law enforcement, any thing — comes from the taxpayers and, as you mentioned, there’s only so much you can squeeze out of a stone.”

Bevin said pensions have been a big problem in Kentucky 20-25 years. 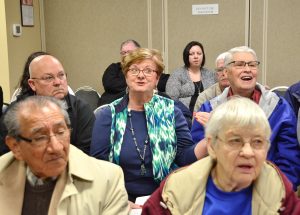 Thelma Blair asks a question of Gov. Matt Bevin during the forum. Photo by Nancy Leedy.

“Nobody really wanted to talk about it and people were lied to straight up, lied to over and over again,” he said. “Being told things were fine when they weren’t. Being told that everything was good when it wasn’t good.”

Bevin said that past administrations and legislators have misled the commonwealth for years, leading them to believe the pension program was in good shape.

“You can keep lying to people. That’s what everyone before me has done,” Bevin said. “It makes it so much easier when you’re running for political office to say, ‘Oh, it’s good. The money’s all there. Don’t listen to them. That’s nonsense. The taxpayers have got your back.’ They do until they don’t. They do until they don’t and that’s the point. The money may be obligated, the check may be written, but if it bounces, how much does that help you?”

Bevin said the condition of Kentucky’s pension systems was one of the reasons he decided to seek the governor’s office.

“There were two things that were broken and being ignored by everybody. This pension (issue) was one of them and the adoption (and) foster care system was the other one. They’re both broken and we’re going to fix them both to the best of our ability.”

Bevin said one of the things that motivated him during his campaign was his grandmother, a single mom and public school teacher who lived off her pension after over 40 years of teaching. “That was all she had.”

The nullification of last year’s Senate Bill 151 by the Kentucky Supreme Court did not help the pension situation, according to Bevin.

“I bet you there are people in this room who were happy when Senate Bill 151 was struck down. No — it screwed the pension,” Bevin said. “When 151 went down, so did any chance that this pension system survives. If our legislature doesn’t pass the very same thing or then some, the gig is up.” 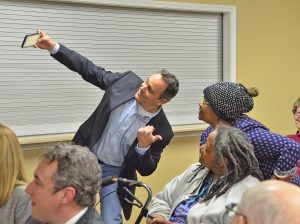 Gov. Matt Bevin takes a selfie with Stacey Harrison, in hat, and Marcia Carson, seated, before the start of Tuesday’s forum. Photo by Nancy Leedy.

“So, back to your question, ‘Is there relief the state can give you?’” Bevin said, returning to Faulkner. “There isn’t. I’m running for an office and I’m probably an idiot for telling you this. But the reality is, is there isn’t. I wish I could say there was. It will probably get worse.”

Bevin also responded to a question about increasing Kentucky’s sales tax to alleviate some of the state’s financial woes. Bevin said he’s a “big proponent” of an increased sales tax.

“I’m a big proponent,” Bevin responded. “It has to happen. Not because I like the idea of raising taxes, but going back to what I said: Where’s the money going to come from?”

“When you tax production, companies like Dollar General move to states where they don’t. When you tax consumption, like that very same state does, business doesn’t mind,” he said.

Bevin said Kentucky has taxes that don’t exist in other states in the country, including inventory tax.

“We’re a state that is blessed to be right in the middle of America, where logistically we have the UPS world shipping hub, DHL’s north American shipping hub and Amazon is building their world shipping hub here in Kentucky. Why? because of where we are,” he said. “Our seasons, our location … How can we not take advantage of that by getting rid of something as antiquated as an inventory tax?”