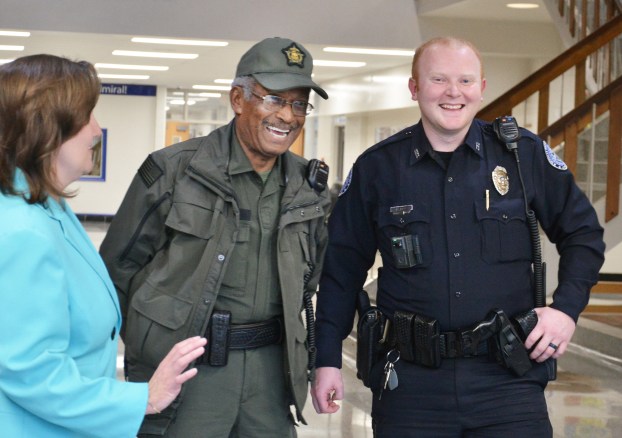 Danville Schools has formed a partnership with Boyle County Sheriff's Office and Danville Police Department to provide School Resource Officers in the upcoming school year. In making the announcement on Tuesday, Danville Superintendent Dr. Tammy McDonald talks with Deputy Charlie Parks from the Sheriff's Office and Officer Ben Ray with the Danville Police Department who will be the SROs next year. Photo by Robin Hart

The Danville Police Department will once again be able to provide a school resource officer in the city schools beginning in the next school year, due to an increase in officers on the force. And because the school district needs two SROs, the Boyle County Sheriff’s Office will provide the second officer.

“We are extremely excited about the partnership with both the city police and the sheriff,” said Danville Schools Superintendent Dr. Tammy McDonald when making the announcement on Tuesday.

Danville Assistant Police Chief Glenn Doan said, “It’s going to be a joint effort starting in the 2019-2020 school year. We’re glad to be back. And we’re glad the sheriff was able to provide two (SROs) in our time of absence, and now we’re ready to help him out and get another officer in here.” 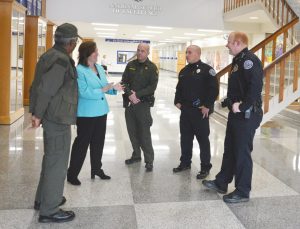 Doan said when the Danville Police Department had to end its SRO program last year, “we were in a position where we did have to remove the school resource officer from the school system, but the sheriff was able to step in when we were struggling with some staffing issues. Now we’ve got our numbers back up and replenished our ranks a little bit. We’re ready to step back in and assist.”

Boyle County Sheriff Derek Robbins said there’s a misconception out there that the sheriff’s office and Danville police don’t have a good relationship.

“There’s times that maybe we didn’t communicate with each other as well as we should have, which has completely changed in the past few months,” he said. “… We do have an open line of communication with them now. And I think this is a perfect example of how we’re working with Danville schools and Danville Police Department and I’m excited about the opportunity.”

Doan said the two law enforcement agencies are always working together. “Our agencies work together great. People don’t see it a lot of the times because it’s behind the scenes. It’s daily, weekly, that we’re working together in some capacity.”

“This will be a little more public and people will see us working together,” Doan said.

Starting next school year, Charlie Parks will continue as the SRO from the Boyle County Sheriff’s Office in the Danville schools, providing security at the John Bate Middle, Hogsett Primary and Toliver Intermediate schools.

“You want students to have an adult they feel comfortable with that they can talk to,” McDonald said. “And Deputy Parks does a great job at building those relationships.”

Danville Police Officer Ben Ray will be the SRO at Danville High School.

Ray said he was born and raised in Danville and graduated from DHS in 2010. He’s been a police officer here for four years. “I know the ins and outs of Danville High School. I know a lot of the teachers and faculty.”

He said he’s looking forward to getting in the school “to start making a positive impact on our younger community and not just our community in general.”

Al Isaacs, who is currently the second SRO provided by the Sheriff’s Office for Danville, will be transferred to Boyle County Schools, which is planning to hire a third SRO, Robbins said.

“It’s kind of a win win,” McDonald said. “Boyle needs a third officer; they’ll have their third officer. And we … are forming a partnership with both agencies.”

Jailer Brian Wofford has changed up the bond policy at the Boyle County Detention Center due to being short-staffed, but... read more