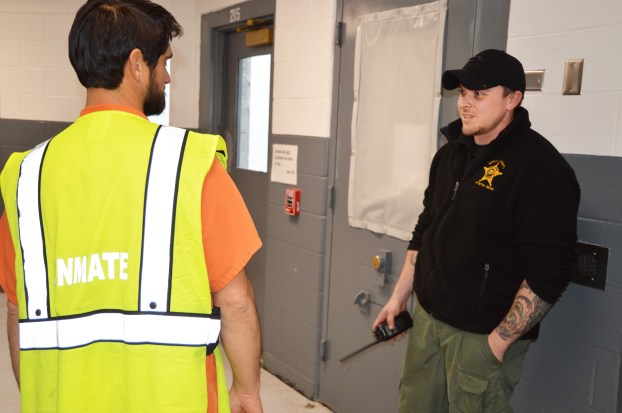 Sgt. Charlie Caldwell talks to an inmate at Boyle County Detention Center who he’s known most of his life. When he first began working at the jail, he says it took some time getting used to seeing people he knows as prisoners, “but it’s a small town and it’s going to happen.” Photo by Bobbie Curd.

Sgt. Charlie Caldwell says he had to get used to dealing with people he knows being booked into the Boyle County Detention Center.

“Like this guy right here,” Caldwell says, walking up to an inmate on work duty — known as a “trustee” — sweeping the halls.

“He’s a good fella,” the inmate says of Caldwell. They went to school together most of their life, even played football together, beginning in middle school.

Sure, it was a little awkward when he first started a year and a half ago, but it’s a small town, he says, it’s going to happen. He’s used to it now.

Caldwell was born and raised in Junction City and graduated from Boyle County High School. After serving six years in the Navy doing combat intelligence, he enlisted in the Army, serving two years and completing two deployments to the Middle East. Now, he’s in the National Guard.

But first and foremost, he says, he’s a deputy jailer. He carries his radio wherever he goes, gaining entrance to secure hallways by signaling his unit and the door number he needs access into. The radio is like another body part, he says. He often mistakenly reaches for it at home when he wants to make a phone call. 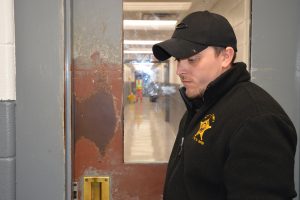 Sgt. Caldwell pauses before exiting the maximum security area of the jail due to a call from the control center about an issue in the general population area. Photo by Bobbie Curd

Caldwell’s days at the jail begin with a shift turnover: Teams fill each other in on what happened overnight; he goes over court dockets and reads through incident reports.

He walks by a cell with an inmate laying on his stomach in bed, staring out the door window. Caldwell says this is the suicide watch area. Inmates with mental issues are monitored by cameras and 10-minute checks around the clock. The other cells up front are checked every 20 minutes.

“This room is for meetings with inmates and a mental health care provider, but we don’t have one right now,” he says. Around the corner, several inmates sit side-by-side in front of a TV screen, awaiting their video arraignments. Moods after arraignments can be varied, he says.

“Good news?” Caldwell asks an older man walking out. He got 13 days, he says, and they discuss his situation.

Caldwell says people would probably be surprised with the relationships deputies build with prisoners. There’s no way around it, though.

“We kind of play the role of counselor, at times. We talk to them about their problems,” he says, explaining that every person is different. “We have everything from Rastafarians to Muslims.”

Some inmates like him; some don’t. Some have never had to follow rules. “But, if you’re consistent with everyone, they know what to expect. They may not like you, but they’ll respect you.”

He feels like the biggest misconception about his job is that deputies “are mean to everyone.”

“We’re not. We try to talk everyone down in tense situations, before having to resort to anything else. It usually works.”

Caldwell runs into his school friend again. “Yeah, he likes to visit here every now and then,” he says, and the inmate laughs. He found himself behind bars due to drugs: He got hooked on pain pills after breaking his leg, then moved on to heroin.

“I used to rodeo, ride horses. Been clean for almost seven months now,” he says.

As of now, county inmates must be sent out for rehabilitation services. They do have someone who comes in for state prisoners, “but it would be good to get an inhouse treatment center. We want to branch those services out toward the county side,” Caldwell says.

Caldwell asks his friend about his indictment, and he says, “I got a county year, so 365 days. I should’ve had 50 county years, so coming out with one is pretty decent.”

They both say sure, it’s a weird dynamic, two school buddies in this scenario — one as prisoner and one as deputy.

“But it’s good in a way, though. If I have questions, I’m more likely to come ask him,” the inmate says. “It’s a comfort level. It’s a weird dynamic, but I’m thankful I have him here.”

He says in his opinion, the inmates are treated fine — as long as they treat others fine.

“Everybody’s got a bad day … If I was treated a certain way, I probably deserved it because of the way I acted. But not everyone has that mentality,” the inmate says.

Caldwell says even though he’s passionate about his job, there are bad days. “But, we try not to carry those.”

Since Jailer Brian Wofford took the helm, Caldwell says he feels like there’s more structure, more of a chain of command. He identifies with Wofford, who also has a military background.

“And the professionalism of the staff, very proud about that,” Caldwell adds, noting it can be hard to maintain sometimes. “We might have 20 things going on at the same time. Then Danville or someone brings in a combative. That doesn’t make you feel good at the end of the day when you have to deal with someone like that. It gets to you, sometimes.”

It’s also stressful having 250 people who need you, that you’re responsible for during each 12-hour shift. “We keep them in uniforms, linens; they can’t eat without us.” They try to keep up with their medical needs the best they can — they have one nurse for the whole jail, and one small medical room.

We walk through maximum security, an eerily quiet, dead-end hall with individual cells. It’s much different from the general population rooms. As we leave, Caldwell walks up to the door and leans on it before calling control to open it, but the door unlocks before he calls. He smiles.

“That’s how you know she’s good at controls,” he says, referring to Dep. Carol Caldwell, who’s manning the control center. She opened the door because she saw him on camera. 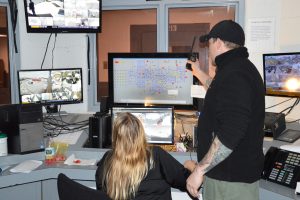 Sgt. Charlie Caldwell, right, talks to Dep. Carol Caldwell (no relation) in the control center of the Boyle County Detention Center. The entire jail is monitored from the center with security cameras, and deputies must gain access to each hallway by radioing. Photo by Bobbie Curd.

After passing through, control calls him about strange activity going on in one of the big rooms. Caldwell pivots around quickly and enters the general population area. Bright orange jumpsuits are everywhere, standing out against the gray walls and floors. Some guys are sitting up in their bunks, others are checking out the unknown visitor in the doorway, asking if they’ll have their picture taken.

A prisoner had condensation from the ceiling dripping down into his bunk; he and others were stuffing trash bags in the area to try and stop it. Not really much they can do, Caldwell says, just try to stop the leak. Some things are in pretty rough conditions here, he says.

“Early on, I’d get nervous on the job. You can get paranoid,” he says, especially when the jail is overcrowded and understaffed. When he first started, he says they had 410 inmates packed into cells, sleeping on matts on the floor; he says they had to step over people to get through.

There can be some bullying, some pack-like mentality. Inmates can be territorial; he says they pay a lot of attention to their surroundings because they don’t have anything else to do. Some have only seen bad things all of their lives and don’t trust anyone.

“You get to know them … their personalities. If you see they’re not acting like themselves, you can pull it out and talk to them,” he says. Every cell is walked through every single hour.

Every now and then, there’s a fight. But not as often as you’d think — nothing close to what he says is portrayed on the many jail reality shows. They are usually able to stop them before they happen.

Since Wofford changed the in-house policy to no longer take financial bonds at the jail, except for over weekends and holidays, Caldwell says it’s helped with workloads tremendously.

“We just needed more time to focus on the welfare of prisoners. Our No. 1 priority is their wellbeing,” he says.

He gets flagged by a prisoner through a cell window who needs a new jumpsuit.

Sure, some employees have specific responsibilities and duties, but for the most part they function as a team, interchanging tasks and filling in for each other.

It’s a family in a teamwork environment — a partnership, he says. “Actually, with 12-hour shifts, we spend more time together than we do with our own family.”

When asked where he sees himself in five years, Caldwell answers without a thought. “Hopefully five years closer to retirement,” then laughs. “I don’t know. Maybe jailer one day. A lot of stress, though. It’s a stressful job.”

Roger Fox, program director for Shepherd’s House treatment center in Danville, is aiming for another location — this time in... read more