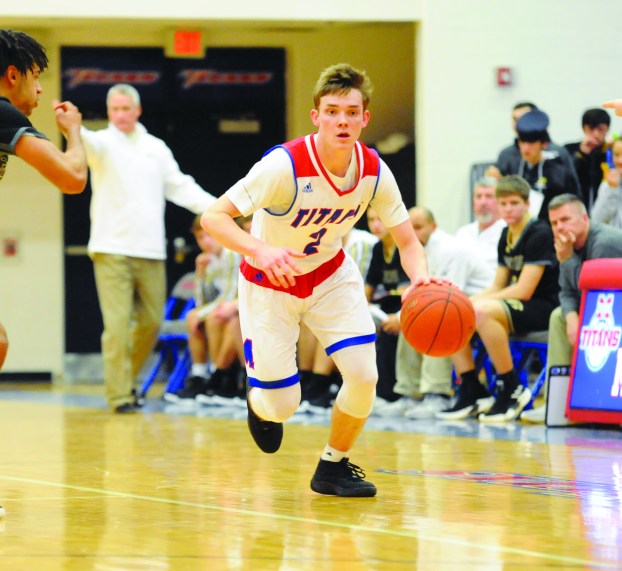 Since the beginning of the basketball season Mercer County boys basketball coach Josh Hamlin has stated again and again that Titans guard Carter Baughman is the best player in the 12th region.

Now, for all intents and purposes, that’s official.

On Monday morning, the Kentucky Association of Basketball Coaches released its list of the region players of the year for each of Kentucky’s 16 regions, naming Baughman the 12th Region Player of the Year.

“I was a little speechless at first,” Baughman said. “Then I just thought about it and realized how big a blessing it is to be able to represent the 12th region and represent Mercer County for the second year in a row.”

Baughman is only the second Mercer County Titan to be named the region player of the year, meaning it’s also the first time in Mercer County history that the school has had back to back region players of the year after Trevon Faulkner won that honor — and later won the Mr. Basketball award — last year.

“Carter’s not the biggest in stature and it proves you don’t have to have the biggest height or be the most athletic to win an award like this,” Hamlin said. “It’s all predicated on his hard work, his dedication, his commitment to bettering himself each and everyday.”

Baughman’s determination to get better everyday shows, and he’ll get to represent the region as a candidate for Mr. Basketball.

As a freshman, he only played junior varsity for Mercer County, who’s varsity squad that year went 33-2 and won the 12th region championship.

As a sophomore, he averaged 5 points and 1.2 rebounds per game. As a junior, in Hamlin’s first year at the helm at Mercer, Baughman averaged more than 13 points per game.

But even after a stellar junior season, Hamlin said Baughman wasn’t satisfied with just being as good as he was at that moment. He wanted to get better.

“We’re trying to build a culture here of hard work and commitment and doing things the right way,” Hamlin said. “Carter Baughman exemplifies that. Whether it’s the summer, or the fall, or the spring, Carter is texting me asking me if he can get in the gym to get shots up. He’s done the things that it takes to put himself at this level.”

Part of that work for Baughman was improving as a player, things like taking shots and working on ball handling. And part of that was also transitioning into the team leader.

Last year’s Titans team featured Faulkner, meaning Baughman was the second — and sometimes third — option. He knew this year that if Mercer County was going to reach their potential, then it was his turn to assume the leadership role.

And what better person to learn from than the Mr. Basketball winner, himself.

Learning under Faulkner helped ease some of that transition but Hamlin says make no mistake about it: The transition to being a team’s go-to player is a tough one to make.

“It’s a different learning curve when you go from being the second or third guy on the scouting report a year ago to being the number one guy,” Hamlin said. “It’s a different responsibility and it takes some time to get used to.”

And it did take time to get used to. The Titans started off 2-5 through their first 7 games, despite Baughman’s remarkable 26.7 points per game through that stretch.

But even through their slow start, there was no panic on the Titans’ sideline and especially not on the face of the region player of the year.

“I think we just had to tell some of the guys that didn’t play much varsity last year to stay positive,” Baughman said. “It didn’t start off the way we wanted but we knew we had to stay positive everyday in practice and keep our mentality there because we knew we were going to get better throughout the season.”

Baughman was right. After that slow start the Titans finished 15-5 over their final 20 regular season games which included a five game win streak, a six game win streak and securing the number one seed in the district tournament.

Now, the Titans roll into the postseason tied for the fourth most wins in the region and guided by Baughman, the region player of the year who’s averaging more than 21 points per game, shooting 48 percent from the field and an astounding 43 percent from three-point range.

And has been the theme for Baughman, he’s still not satisfied with the Titans being as good as they are right now.

“The most consistent team is going to win the region. We’ve just got to put a nice little win streak together to win it,” Baughman said.”And I think we’re capable of doing that.”

As for Baughman, Hamlin groups him with some of the other players he’s had the opportunity to help coach: Faulkner, last year’s Ms. Basketball Seygan Robins and former 10th region player of the year Omar Prewitt. And now, Carter Baughman.

“These kids are self made basketball players because they understood what it took internally and wanted to be the best. When they put all the hours in when the lights weren’t shining on them then they knew when the lights turned on that they would shine on them.”

Now, the lights are shining on the 12th region player of the year Carter Baughman.