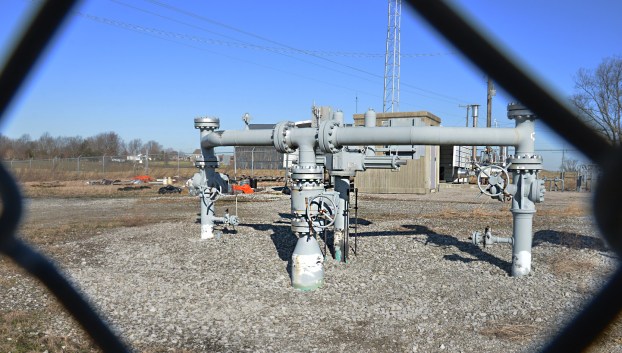 Natural gas mainlines belonging to Texas Eastern, Tennessee Gas and Atmos Energy converge inside a fenced in area at a mainline valve station on Alum Springs Cross Pike. If a mainline emergency should occur somewhere in the area, natural gas can be shut off from this location. Photo by Robin Hart

There are more than 20 miles of natural gas pipelines cutting through Boyle County from three different gas companies, which is why area first responders take part in an annual training event in how to handle pipeline emergencies. 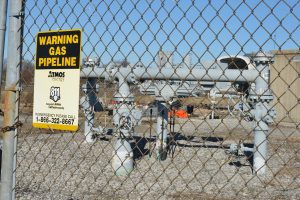 Natural gas mainline valves are located in a fenced in area on Alum Springs Cross Pike.Photo by Robin Hart

Paradigm Liaison Services hosts the annual event at no cost to the agencies that take part in the training, said Boyle County Emergency Management Director Mike Wilder. Training begins with a “refresher course,” showing all the different kinds of gas pipeline markings and warning labels, Wilder said. They also make sure first responders have correct emergency contact information for the three companies with pipelines in the area — Texas Eastern, Tennessee Gas and Atmost, Wilder explained.

There will also be a tabletop scenario involving all first responders, where a scenario will describe a natural gas pipeline emergency, probably in a populated area, Wilder said.

“They’re not going to present a scenario that doesn’t involve a lot of thinking. If it’s 20 miles out in the country, you’re going to do things a whole lot differently than you would if it’s at the intersection of Ky. 34 and the bypass,” Wilder said.

This is a way for everyone to check their instant command practices, resources, evacuation processes, and types of heavy equipment that would be needed in an emergency, he added.

First responders won’t know exactly what scenario will be presented — like a pipeline rupture or explosion, Wilder said. But they will have to know how to get big equipment like backhoes in place “to get down to where the 24-inch gas main lines are,” and how far away from the event to evacuate the public.

“That’s what happened over in Garrard County several years ago. They had a gas explosion over there.”

Wilder said there are 24 million miles of natural gas pipelines carrying 65 percent of the nation’s energy. So it’s important for first responders to be familiar with emergency pipeline safety.

And because natural gas mains from three gas companies converge at a valve station on Alum Springs Cross Pike in Boyle County, it’s imperative to know where the cut off valves are.

If there is a gas line rupture or explosion, “you’re not going to do anything until the source is cut off,” Wilder said.

Natural gas mainlines belonging to Texas Eastern, Tennessee Gas and Atmos Energy converge at a mainline valve station on Alum Springs Cross Pike. If a mainline emergency should occur somewhere in the area, natural gas can be shut off from this location. Photo by Robin Hart

A natural gas mainline value sits above ground at a mainline valve station on Alum Springs Cross Pike. Photo by Robin Hart
You Might Like

The Danville Board of Education is interested in a possible reorganization for its youth sports teams, including potentially increased funding.... read more