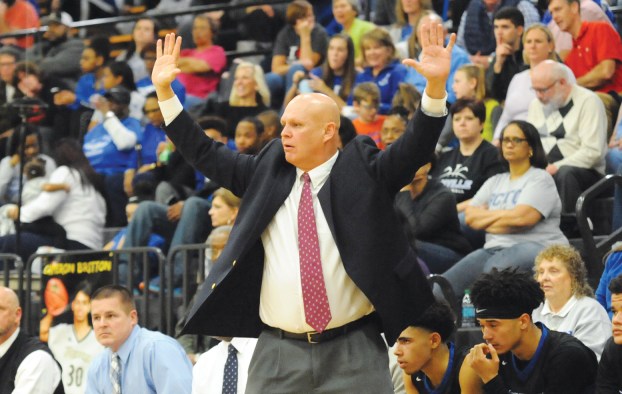 Things have gone right for Danville boys basketball this year.

The Admirals have put together the best year in the 12th Region this year, going 24-4 and 14-1 in region play with two regular-season games left.

It’s the best regular season for Danville in more than two decades, and it’s a reason why head coach Ed McKinney was named the 12th Region coach of the year by the KABC.

“If you could figure out why things work out some years, you’d do it every year,” McKinney said. “Sometimes it’s just chemistry, sometimes you get the right games at home and you pull out a couple close ones. I think we’ve got experienced players, and that helps. Every year, that’s a bigger factor.”

Danville is flat out good. McKinney has a team that is winning because they’re the best team on the floor. McKinney consistently plays 10 players each night, and there’s not much of a drop off from the first unit to the second.

The next-biggest piece in Danville’s success?

One of McKinney’s favorite examples is senior Caden Hill.

“That’s a huge part of it. Caden Hill, there’s not a better kid. Every time he gets off of the bench to clap for teammates, it’s authentic,” McKinney said. “Most of the time you’ve got to almost force kids to do that. He’s truly in it for the right reasons, he loves his teammates. Good players is the number one reason we’ve had a good year, and 1A, we’ve got unselfish kids, you don’t get that all the time.”

And the team is full of unselfish players: The Admirals have six different players who have scored at least 150 points this season.

Part of that unselfishness is thanks to a senior class that has been through struggles and has seen previous teams not “click” the way this team does.

“You learn a lot from failure, you learn as much from failure as you do winning, sometimes more,” McKinney said. “Sometimes winning covers up problems. They’ve seen both sides of it, they’ve learned that you’ve got to get ready to play. Kentucky high school basketball is hard. You’ve got to prepare right, go in with the right mindset, do things right.”

That has helped McKinney as a coach, because he knows his players know how to do the right thing.

“It’s just about playing hard and playing the right way,” the coach said. “They know what a good shot is, they know when they should kick it, when you should lay it in, when you loaf back or when you pout. Just coach yourself, that’s the good thing about having a veteran bunch. They know. Just play the game the right way, they know. If you let them figure it out themselves, they get it. A lot of high school kids, they want to figure it out themselves.

“There’s some basic truths in basketball: Get a good shot and play hard, don’t make it about you. That’s not something they don’t know. They hear it every day on TV. That’s what I preach, play the game the right way.”

Danville has certainly done that, and it’s doing it on the defensive end. For the Admirals to make a run in the postseason, it’ll take more of that defensive focus.

“I’d gladly trade the coaching award for a couple other trophies,” McKinney said. “I think Billy Hicks at Scott County said this the other day, ‘if we could play best out of seven, I like our chances. But in a 32 minute high school game? Anything can happen.’ We’re good enough to win a lot of games in the postseason, and we could get beat in the first round. They understand that.”