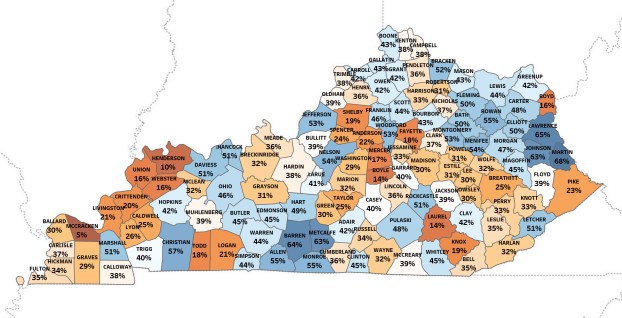 AOC report: Boyle and Mercer still among least likely to let defendants out without money

Boyle and Mercer counties are still among the hardest places in Kentucky to get out of jail without paying money. But they’re no longer the counties that offer defendants non-financial bonds the least, according to a new report from the Administrative Office of the Courts.

That designation goes instead to McCracken County in western Kentucky, where defendants were offered non-financial bonds only 5 percent of the time in 2018, according to the report.

Boyle County defendants were given non-financial bonds 14 percent of the time in 2018, tying the county for third-lowest in the state. In Mercer County, the number was 17 percent, making it eighth-lowest.

By contrast, defendants booked into jail statewide could get out without paying money 40 percent of the time; and there were 20 counties where non-financial bond rates exceeded 50 percent.

“I think that’s great. I’m excited by that,” public defender Jessica Buck said of Boyle and Mercer’s rise from the bottom of the list in the AOC report. “I still think there’s a lot of work that needs to be done.”

District Judge Jeff Dotson and Circuit Judge Darren Peckler — the judges responsible for setting bonds in Boyle and Mercer counties — did not respond to multiple requests for comment on the new report.

Last year, Boyle and Mercer counties commissioned a study that found their jail is chronically overcrowded due in part to slow case processing and local bond practices at the circuit court level. The study recommended numerous changes, including an end to the practice of setting new bonds and re-jailing defendants who are successfully out on bond when a grand jury indicts them.

Peckler declined to participate in developing the study and prohibited the counties’ other judges from participating, according to prior comments from Boyle County officials.

But since the study has been developed, Buck has said she has seen some changes in Peckler’s courtroom, including more non-financial bonds and lower financial bonds.

“What I’m seeing is we’re setting some very low cash bonds, which people are ultimately able to pay,” said Buck, who is directing attorney for the Department of Public Advocacy’s Danville office. “But it’s still taking time, those people are still in jail. Even three days in jail can cause someone to lose their job.”

Data in the new AOC report backs up what Buck said she’s seeing:

• Statewide, the percentage of defendants able to pay their financial bonds decreased over the same time period, dropping from 43 percent in 2016 to 39 percent in 2017 and 2018. 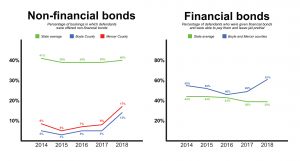 Graphic by Ben Kleppinger/Source: Administrative Office of the Courts
Data from the Administrative Office of the Courts shows the percentage of defendants offered non-financial bonds increased in Boyle and Mercer counties in 2018, but remained well below the state average. At the same time, Boyle and Mercer defendants with financial bonds were more likely than the state average to be able to pay their bonds and be released.

“I would still like very much for us to be closer to the state average,” Buck said. “I think there’s some pretty easy ways to do that, specifically not re-arresting people who are successfully out on non-financial bonds in district court and making them post financial bonds when they’re indicted.”

Other changes recommended by the local jail study include ending a practice of setting no bond for defendants if they participate in the “rocket docket” program and adding more court dates each month to speed up case processing.

Boyle County Attorney Chris Herron recently relaunched a rocket docket program for Boyle County using a $15,000 grant from the Prosecutors Advisory Council. The program is intended to specifically target drug-related cases, in hopes of moving defendants out of the criminal justice system and into treatment as quickly as possible.

Herron said in late January he had asked Peckler to end the policy of giving rocket docket defendants no bond and Peckler said no.

Peckler has added a second arraignment date each month specifically for defendants who are being held in jail, Herron said.

But Buck said it seems all arraignments for jailed defendants are being held on the new date, and only defendants out on bond with private attorneys are having hearings on the original court date.

“I would argue it’s not really an additional day,” she said. “… The issue is still that if you’re picked up after a certain point in time, once it’s too late to get on the docket, you’re going to sit in jail for a month.”

Buck said defendants at the district level do get out of jail quickly and the use of “bail credit” — $100 per day spent in jail toward whatever a defendant’s financial bond might be — also helps.

“We let a lot of people out in district court and I think that’s been the case for a while and that continues to be the case,” she said.

Buck said other changes that would further reduce the number of people being held in jail include police issuing summons to appear in court for low-level offenses; and the state increasing the threshold for felony theft from $500 to $1,000 or $2,000.

“I think we are trending in the right direction,” she said. “I think it’s great the community seems to have embraced changes and the judicial system is making changes.”

Restructure could let Parks & Rec board focus on programming

The Danville-Boyle County Parks and Recreation agency and its board could soon be restructured as a department of the City... read more