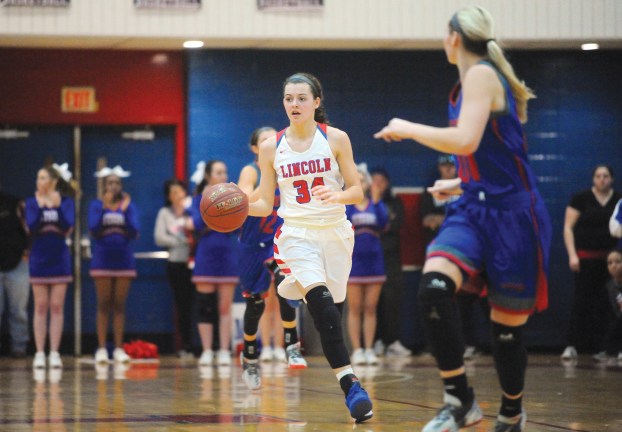 Emma King has put in work on the basketball court.

The Lincoln County senior was named 12th Region Player of the Year this week, qualifying her as a Miss Basketball candidate. She’s committed to the University of Kentucky. She’s one of five seniors in a class that has powered the Patriots into conversations as the state’s best team.

King has a strong case for Miss Basketball, and it’s one that started when she was in second grade.

“It kind of all started when Jenna started playing, she’s my older sister,” King said. “She started playing when I was in second grade. I started going to practices with her and I was just shooting on the side goals and my dad said, ‘hey, you’re not too bad at this.’”

Before that, King didn’t have a care in the world for basketball. But since then, it has consumed her life. And she’s loved it.

“My dad used to joke with me because before, I didn’t care and then by fifth grade, basketball was everything,” she said. “Everything was basketball. Eat, sleep, basketball. That’s how I wanted it. I would go to the gym before AAU practices, get there an hour and a half early and I’d shoot. Then we’d have practice, and if I didn’t shoot good I would stay another hour and a half or two hours. I’ve had to work for it but I wouldn’t have it any other way.”

King’s family has played an important role in her development as a star on the basketball court. Her father coached her first team when she officially started in third grade.

“I started playing my third grade year, (dad) was the coach and me and Kaitlynn (Wilks) played too, played up with the fourth and fifth graders,” Emma said. “It kind of just started from there. My family has been there through the whole ride, I’m really grateful to have them and just the sacrifices they’ve made for me is really incredible and surreal. I’m really thankful for them.”

Her basketball family has been important as well: Wilks, Maddy Boyle, Zaria Napier and Anna Lee make up the Patriots’ senior class that has won 94 games (and counting) across four years in high school. King tops the Patriots’ record books for scoring — boys or girls. That takes a lot of assists.

“All five of us seniors and even our juniors like Trinity (Shearer), we’ve played together since we were in fourth grade,” King said. “We’ve played every single summer together up to last year or two years ago. We were all together. We obviously have great team chemistry and I think that helps us.”

It’s a special year to win the 12th Region girls basketball player of the year award because of the incredible talent in the region.

“It’s a big honor, I’m really humbled and I’m really grateful that I have the opportunity to play,” King said. “I’m just glad because our region, we always have a bunch of great players. I think it’s a huge honor and I’m just really excited about it.”

“Emma has had a great year, and to win the 12th Region Player of the Year is a huge honor for her personally,” McWhorter said. “As she said, the quality of players that you have in the 12th Region year in and year out, it’s a big honor to get that title.”

Both King and McWhorter know that the award wouldn’t be possible without a strong team around her.

“It’s easy when you’re 15, 16, 17 years old, for jealousy to maybe creep in,” McWhorter said. “There’s a lot of talented players in our region and on our team. It would be easy for any player in that locker room to have a little envy or jealousy to Emma or anyone that receives honors. But Emma knows she can’t do this without her teammates. I think her teammates know that they’re a huge part of any successes she has individually or we have as a team.

“That’s one thing as a coach you have to reiterate all the time, this is a team game. The more successful we are as a team, it’s going to help her as a Miss Basketball candidate or receiving region player of the year.”

And with the season not over, the award might paint a larger target on King and the Patriots. But she says bring it on.

“As a player, it might put more of a target on your back, but I like a challenge. It’s OK,” she said. “I think it just makes me play harder every game because I want to show people what I’m capable of and I want to represent our region well. I always want to do my best.”

Lincoln County’s 2018-19 season has been special. And that’s down to a special group of players, head coach Cassandra McWhorter... read more