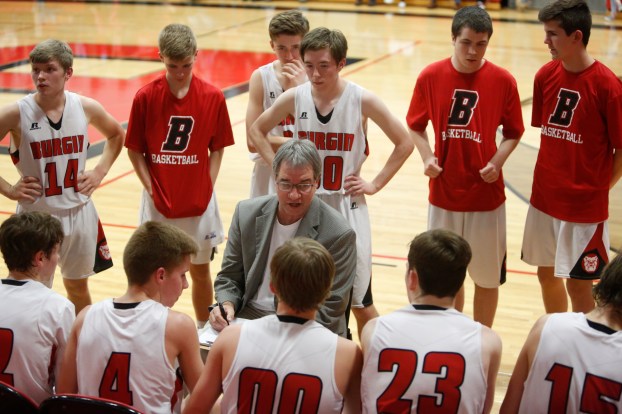 Burgin coach Don Irvine instructs his players during a timeout in the fourth quarter of the Bulldogs’ 79-72 victory over Jackson City on Thursday. It was the final regular-season game for Irvine, who is retiring after 18 seasons at Burgin.

BURGIN — Don Irvine has learned never to say never, and he isn’t about to say he’ll never coach basketball again. But this time, he knows it’s the right time.

Irvine, the longtime coach of the Burgin boys, is walking away from the game on his own terms. And when he does walk away, whether that is next week or some time thereafter, he’ll close the door behind him.

He said he might resurface as an assistant coach, but he doesn’t think he’ll work as a head coach again after Burgin’s season ends.

“You just get that feeling,” Irvine said. “I’ve put 40 seasons into it, and I’m getting to where I feel a little different towards games and practices, and I just need a break. I told somebody, ‘I don’t want to be in charge of anything for a while.’”

Yes, Irvine has retired from coaching before. He stepped down at Burgin in 2012, only to resurface a few months later at another school. But things were different then – in more ways than one.

In 2012, Irvine retired from teaching and coaching to care for his ailing father, who died just a few months later. He said it was something he had to do at the time, but this decision is about what he wants to do.

“When I announced it this time, it was like a load was off my shoulders,” he said. “It’s time for me to take a break and do something else for a while.”

Does he know what that is yet?

Irvine said he probably isn’t done with basketball, but he no longer wants to commit the amount of time that being a head coach requires.

“It just gives me more flexibility. I don’t want to go away from the game, I don’t think, or away from the people that’s involved, but I don’t want to be tied down,” he said. “I want that job that everybody wants: I want to get paid, I want to come in and leave when I want to and do what I want to do. I can see this maybe not working out exactly the way I would hope, but I’ll still be OK with it.”

Basketball has been a way of life for Irvine, who has made a career out of coaching at small schools, and much of his basketball life has been spent at Burgin. He has won 224 games in three stints covering 18 seasons at the school next to the flashing red light, which won its one and only regional championship in 1938.

He coached the Burgin boys from 1986-89 and again from 2002-12. During his second tenure, he also coached the Burgin girls for nearly two full seasons. He returned in 2014 as athletic director, then became the Bulldogs’ coach again in 2015 when the school found itself with a coaching vacancy but no teaching position.

“I told this class I was going to see them through, and the other thing is, so many coaches here at Burgin have been three-and-out, and I decided I was going to stay at least four to get some continuity there,” Irvine said.

Dennis Berry, who has been beside Irvine as his assistant coach for these last four seasons, understands the importance of continuity. A 1999 Burgin graduate, he played for three coaches between Irvine’s first and second stints at the school.

“You see a lot of coaches come in this place, and they don’t stick around. You’ve got a lot of three- and four-year guys, even two-year guys, and then they move on, but coach Irvine came here and he stayed,” Berry said. “They like to joke that he’s ‘The Legend,’ and around here he really is.”

All joking aside, Berry said Irvine’s willingness to teach the game to the boys in this small community for so many years has earned him a measure of respect.

“He’s kind of an institution here. You know what you’re going to get year in and year out: You’re going to get a team that plays hard, a well-structured team, guys that know what they’re doing offensively and defensively,” Berry said. “A lot of times you don’t get that at some small schools. Sometimes it’s a lot of chaos, and you can tell they’re not organized. Coach Irvine has come in and set a precedent and set a foundation for the way the program should be and tried to teach boys how to play basketball.”

Two of those boys were Irvine’s own sons, Zach and Sam. Zach followed his father’s footsteps into coaching and is currently working as an assistant at Bourbon County, while Sam is working in the hospitality industry in Florida. Their father said he looks forward to spending more time with both sons.

He’ll also be keeping an eye on how things are going at Burgin, where Berry might well be in charge of the program in just a few months. Irvine said Berry has been a key to the program’s continuity since he returned to his alma mater as an assistant coach in 2012, and Berry said he’d like the chance to lead the Bulldogs next season.

“I would love to have the opportunity, but I’ll trust that the school does what they think is best for the program,” Berry said.

Berry already has more experience than Irvine had in 1984 when he was hired as the head coach at Augusta at age 24, only seven years removed from the end of his own playing career at Pulaski County. He spent two seasons in the small Ohio River town before coming to Burgin for the first time in 1986.

He left Burgin in 1989 for McLean County, only to return in 2012. Following his first retirement, he spent one season coaching the Western Hills girls and one coaching the Garrard County girls before returning to Burgin in 2014.

Irvine has more than 370 victories as coach of boys and girls teams at Burgin and Augusta, the boys team at McLean and the girls teams at Garrard and Western Hills.

He said Augusta will always hold a special place in his heart, but there has been no place quite like Burgin.

“I do love Augusta, and they took me in like family, but this is where I’ve got my roots with my kids, and it’s in the 12th Region, which is my home. This is like an extension of my home up here. There’s a lot of things I see that I’ve been a part of through changes and buildings and switches here, and I just feel like a part of me is in here.”

So what memories will he pack along with the mementos he takes from his tiny office in the coming weeks? He’ll remember the successful teams, to be sure, such as this year’s 20-win squad and the 2012 team that went 22-9, but he’ll also remember those teams that didn’t fare nearly as well.

“I’ll remember the kids and the people,” he said. “I remember the year we won three games, and how we fought that last game of the year like it was the finals of the state tournament to get us a win. I remember how hard that was and how much we enjoyed that. We’ve learned just to accept and enjoy those little victories.”

What will he miss most?

“The competitiveness,” he said. “I like competing, and I like seeing your team do something that you’ve worked on and you’ve drilled, where everything works well. The camaraderie of a team when they’re playing well.

“And there’s so many coaches I’ve had over the years as good friends. You’ve still got some guys that are doing it for the right reasons, and those are the guys that you like to tell stories about.”

“I’m not much on change. I hope they kind of stay the way they are and have some success doing that. I’d be tickled with that.”

Bulldogs get win No. 20 in final regular season game

BURGIN – Twenty is just a number, really, like any other. But when Burgin’s boys basketball teams count up their... read more