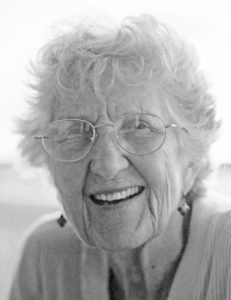 Mimi grew up in Wayzata and attended the University of Minnesota and Yale University Graduate School. She was a Lieutenant JG in the U.S. Navy W.A.V.E.S. during World War II. A devoted Baha’i beginning in 1953, Mimi hosted meetings in her Cambridge home with her husband, Sam McClellan, for 20 years. She also gave piano lessons to neighborhood children, wrote many inventive musical works, and raised her family.

In 1974, the McClellans moved to Danville, where Mimi quickly became an engaged and beloved member of the community. She continued teaching music and composing, she eagerly took up gardening, and developed close friendships with her neighbors on beautiful Chrisman Lane, in town, and at Centre College. Mimi cherished her 30 years in Danville.

In 2003, five years after Sam’s death, Mimi married her childhood neighbor and lifelong friend, Jim Krebs. She spent her final years with Jim in Marblehead. Mimi is survived by her three children, John McClellan of Hatfield, Mass., and Charlee and Maggie McClellan of Seattle, Wash., and two grandchildren, Elizabeth and Julia.

A MEMORIAL will be held sometime in June.

To view the full obituary go to www.stithcares.com and to hear Mimi’s music visit mcclellanmusic.org