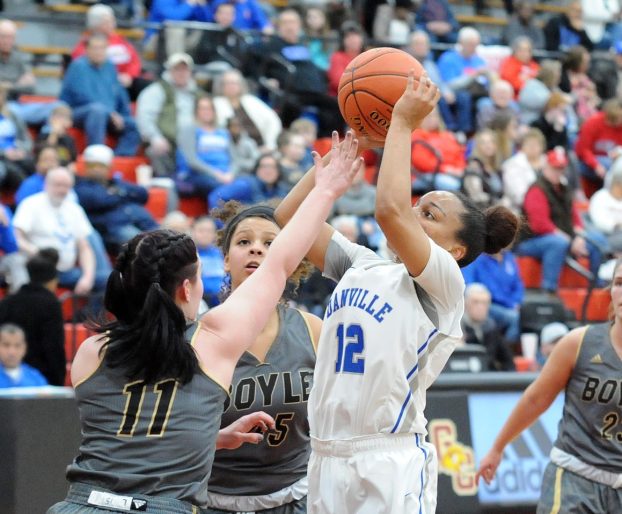 For 28 minutes, the Rebels made things interesting against the Admirals. But Danville pulled away in the final four minutes to take a 62-49 victory in the 45th District semifinals at Garrard County.

“We didn’t have a flow. But what I told them, I’ve been doing this a long time. I’m just glad to get out of here with a win,” Danville head coach Judie Mason said. “I told them in there, I love them. There’s nothing I can say good, bad, ugly in there. I didn’t say anything about the game because there’s nothing to say, we’re playing in the region next week.”

Boyle’s gameplan was simple: Get back on defense, slow the Admirals’ offense and methodically work the ball inside on offense.

Alyssa Wray scored a game-high 26 points for the Rebels, proof that their offense paid off.

“I told the girls after the game, we followed everything pretty much perfect,” Boyle head coach Greg Edwards said. “I thought our execution was great, I thought we had a good gameplan. We got the ball inside, Alyssa had a great game. Makayla had some baskets inside and made some great passes. We were patient.”

Boyle led for a majority of the first quarter before Danville took a 15-12 lead into the break. Wray started hot, scoring eight points in the first eight minutes. Ivy Turner led Danville with seven points after one.

“They didn’t do anything we didn’t know they was going to do,” Mason said. “We knew that (Boyle) was going to run that defense exactly like they did and for some reason, we stood around tonight. I don’t think anybody moved at all. I thought Tyliah (Bradshaw) came in and gave us a spurt, and then I thought Haley Price-Hancock came in and helped us. But I knew we couldn’t guard (Alyssa Wray) walking up and down the floor, that’s why I was disappointed. We played their game tonight instead of making them play our game. That’s what happens when we slow it down.”

Boyle gained a point in the third quarter, cutting the Ads’ lead to 45-41 with eight minutes left.
But foul trouble — Wray sat with four fouls for most of the fourth quarter — came back to bite the Rebels. And the Admirals stayed out of foul trouble — Danville finished with 23 free throws to Boyle’s four.

Danville cracked the Rebels’ defense in the fourth quarter: Lara Akers hit two threes and Ivy Turner found space to control the tempo of the game.

“You can see, we’re not a slow down team,” Mason said. “We don’t know what to do when people slow us down. And I thought Ivy was a little sluggish tonight, she’s not been feeling well. I thought she was in slow motion, usually she’s got that first step and gets going. Tonight, for some reason, she didn’t have it. I don’t know if it was them stopping us or if it was us stopping us.”

Edwards said he thought his team’s defense was admirable in the first three quarters.

“One of our keys to the game was transition defense and defensive communication,” he said. “I thought we did both of those really well. We had one little spurt right at the five minute mark where we got tired and Turner kind of took over. She got down in the lane, we had done a pretty good job of not letting her in the paint. She got three really tough possessions that kind of made the difference. But she’s one of the top players in the state, you expect her to make plays.”

Edwards said he’s disappointed that the season is over but is excited to see how his young players grow from the experience they’ve gained this year.

“I really feel like it’s a shame the season is over,” he said. “I feel like we’re playing our best basketball in the last two and a half weeks. That’s the thing about our district unfortunately, we’re going to sit at home and not make region. In most years, we’re probably better than teams that’ll make it. That’s just the way it is.”

Mason said that the win was an important one for her Admirals. Danville will face Lincoln County for the 45th District championship on Friday at 6 p.m.

“People are going to have to slow us down to beat us, everybody knows that,” Mason said. “The first game in the district is the hardest one, and this gives us an extra week to practice. I’ve said from the beginning, I love this team. I love being around them, in the locker room. It gives us another week to be together.”

Neal Brown grew up in a family of coaches and educators. As West Virginia’s head football coach, Brown will continue... read more