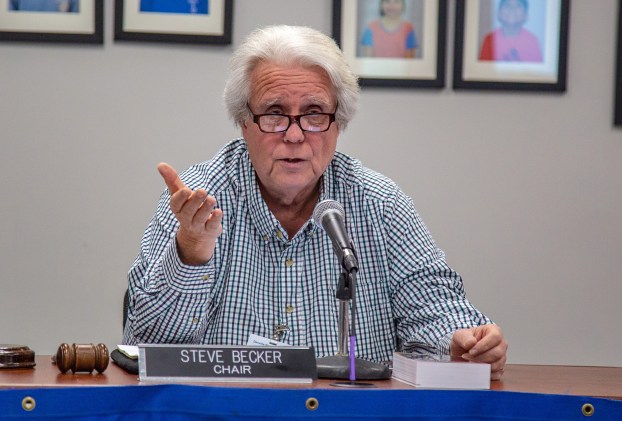 Danville school board Chair Steve Becker leads Monday night's meeting, during which the board accepted the low bid from contractor DC Trimble to construct a softball field behind Bate Middle School. Photo by Ben Kleppinger

The Danville Board of Education approved the low bid to construct a softball field behind Bate Middle School Monday, putting the district on track to have its own softball field for next school year.

The project has been in the works since 2001, board Chair Steve Becker said.

“We literally have been working on this thing for 18 years,” he said. “So it’s definitely time. I’m so looking forward to getting it finished.”

DC Trimble was the low bidder to build the facility at $495,847. The board unanimously approved the bid.

Christy Denny, the district’s director of administrative services, said the district will be doing a lot of additional work itself, including irrigation, lighting and building restrooms and a concession building. After adding in contingency funds and fees for the architect and engineer, the total project cost will be about $750,000, she said.

Denny said the project is being completed with district general funds.

While the board approved the low bid Monday, it must still approve several other pieces of paperwork at a special called meeting scheduled for 8:15 a.m. Wednesday.

Becker said he anticipates no discussion and quick approval of the remaining documents needed by the state at that meeting.

“If we miss any of this, literally it could put us into March getting these things approved and that would really almost make it impossible to get grass on the field in time,” he said.

Board member Lori Finke said other districts have sold naming rights and other sponsorships to community businesses to help cover the cost of building athletic facilities. She wondered if the same thing could be done with Danville’s softball field — perhaps by finding a local business that wants to purchase the field’s scoreboard, for example.

“It’s worth thinking about this as we do this project,” she said.

Who were America’s greenest presidents?

Since we just celebrated Presidents Day this week, I’ve been thinking about the great power presidents have over environmental policy... read more