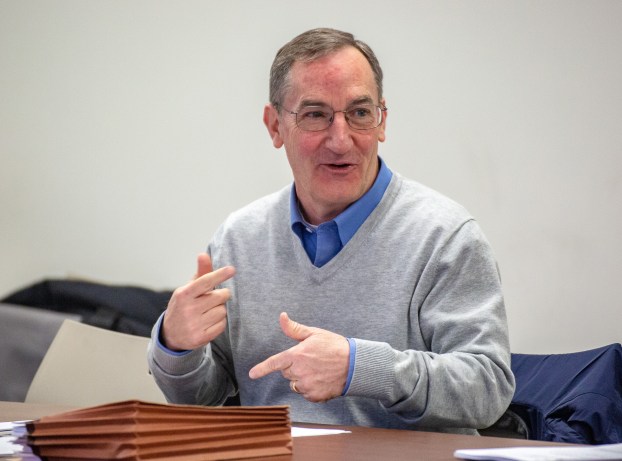 Develop Danville wants more than twice as much funding from the City of Danville and Boyle County Fiscal Court in order to implement several economic development strategies next fiscal year.

The special-purpose government entity officially known as the Economic Development Partnership hopes to grow its budget by about $183,000 for 2019-20, Treasurer Alan Turbyfill said Wednesday. $157,500 of of the funding would come from Danville City Commission and Boyle County Fiscal Court, according to the draft budget.

Both local governments are going to be asked to contribute $150,000. This fiscal year, Danville is contributing $72,500 and Boyle County is contributing $70,000; the proposed contributions represent 106.8-percent and 114.2-percent increases, respectively.

The total budget of $575,960 would allow Develop Danville to make several major investments in economic development, according to Turbyfill and board Chair Ben Nelson. It would:

• provide $42,000 for workforce development efforts, including an area wage-benefit survey and a regional job fair; 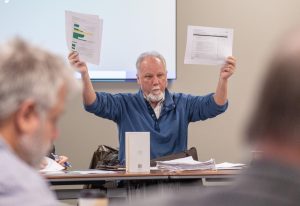 • $50,000 for development of the Norfolk Southern property in between the viaduct and the southern side of the Danville bypass, which is the county’s only industrial site with rail access;

• $25,000 for engineering and design work to make an existing industrial site “pad-ready;” and

• $25,000 for engineering and design work on potentially expanding the amount of land available in the industrial park.

As Turbyfill presented the proposed budget, Nelson cautioned it is in draft form and everything is dependent on whether Develop Danville gets the funding it’s asking for. The budget shows what could be accomplished, but “we’ve got to back into the revenue side” based on what Danville, Boyle County and others decide to fund, he said.

Danville City Commissioner Denise Terry, one of three Develop Danville board members representing Danville, pointed out public governments such as Danville and Boyle County are prohibited from spending taxpayer money on developing privately owned land. That means if the industrial foundation owns a property, the city and county can’t legally provide funding to improve it.

“Then you all need to go buy some land and let’s build a pad-ready site, OK?” Nelson responded. “That’s one option.”

Terry said she wanted it clear that spending money on privately owned land is not an option.

Nelson and Turbyfill said exactly what the asset development funding would be spent on would have to be hammered out at a future date; when Develop Danville gets into the specifics of how to spend the money, it could find ways to do so without running afoul of public funding restrictions.

“Maybe you don’t spend it on land, maybe you spend it on a road to the land, spend money on infrastructure to the land,” Turbyfill said. “We know there’s got to be more spent going forward, and there has to be other sources of income than just what the industrial foundation can do on its own.”

The proposed budget would provide:

Before discussing the budget, the Develop Danville board also reviewed the main objectives of its strategic economic development plan, including six workforce development objectives.

Nelson said there are already job fairs happening in the area, so it may be good to question whether Develop Danville or the regional economic development group it helps run, Kentucky Crossroads, needs to be the entity to put on a job fair.

Jody Lassiter, Develop Danville president and CEO, said he’s “not sure if all my regional counterparts would buy in” to a regional job fair.

“It’s not only a job fair, it’s also a community resource fair,” she said. “… It’s also set up for individuals who need help gaining employment, not just employers who are trying to  hire them. We know that we have to help people figure out ways to be successful job applicants and secure jobs.”

Included in the proposed budget’s marketing expenses is $21,250 for “opportunity zone investor facilitation.”

Turbyfill said that funding would be matched by the Convention and Visitors Bureau to provide a total of $42,500 for attracting investments for a downtown hotel project inside Danville’s federal “opportunity zone.”

Opportunity zones were made possible through a provision of the Tax Cuts and Jobs Act of 2017. Danville’s opportunity zone covers the downtown area south of Lexington Avenue and west of Stanford Road; it extends south to Clark’s Run and west to the Norfolk Southern railroad. It’s one of 144 zones created by Gov. Matt Bevin in April.

“The designation offers significant federal tax breaks and deferrals to entities and individuals investing in opportunity funds, which support development projects within one or more zones,” according to a news release from the governor’s office.

Lassiter said there is a 31-month window for people to make their investments in opportunity-zone projects in order to gain substantial tax breaks, but the economic incentives get less and less as each month goes by.

The way the program is working is very “project-driven,” meaning it won’t work to simply market the existence of Danville’s opportunity zone; leaders must market a specific project within the zone, Lassiter said. Because the CVB already has a feasibility study completed for a downtown hotel, that’s the project with the most legwork already done and so the best option for attracting investors, he said.

“… Creating a prospectus for the opportunity zone is critically important,” she said.

The board agreed its Marketing Committee should look into the matter further and come back with recommendations on who should do what to ensure the community doesn’t miss the opportunity zone window.

The budget would fully fund a full-time “economic development specialist” position with a salary of between $40,000 and $50,000, and provide $30,000 in funding for three contract labor positions focused in three areas: workforce development, marketing and community outreach.

This fiscal year, Develop Danville had budgeted to pay a vice president/chief operating officer for most of the year. But after the organization’s first COO, Hal Goode, resigned in May 2018, attempts to find a replacement have been unsuccessful.

The economic development specialist position and three part-time contract positions make less money than the COO position had been budgeted for, but when combined they result in the net increase of around $12,000 to $15,000, Turbyfill explained.

Nelson called the discussion of the draft budget a “first reading,” but noted it will have to be revised once its known how much funding will actually be provided. Develop Danville is usually left scrambling to rework its budget at the last moment once its partner agencies finalize their budgets for the next fiscal year, he said. “We usually get to approve a budget at 11:59 p.m. on June 30, by the hair of our chinny-chin-chin, because of how fun this process is.”

Danville Independent School District is growing its preschool program by a third next school year, and some of the new... read more