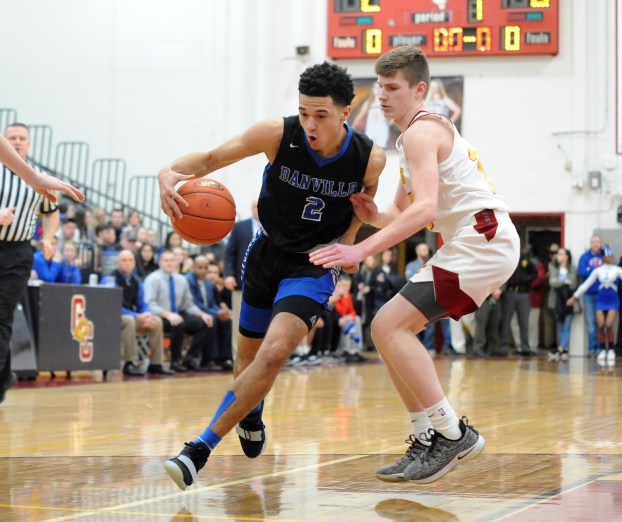 Thornton, St. Martin power Admirals past Garrard in second half

LANCASTER — Danville’s seniors stepped up when it mattered most.

Garrard County held a 34-30 advantage at halftime thanks to a 17-point second quarter: Brayden Sebastian scored nine points in the second frame and had 11 points to lead all scorers at the break.

But the Admirals switched to a run-and-jump defense in the second half, trapping Sebastian as soon as he crossed half court. He didn’t score in the third quarter and finished the game with 17 points.

“We did work on that because if you let him get loose, you’re just praying that he misses,” Danville head coach Ed McKinney said. “You can’t cover him 1-on-1 because he’s going to jump over you. We did get that, and he missed some shots.”

But the story of the Admirals’ second half came on the offensive end: Thornton put up 12 points in the third quarter and St. Martin added seven, helping the Admirals take a 51-44 lead into the final frame.

“You’ve got to have guys that do that,” McKinney said. “That’s where I think hunger, you don’t want it to be over. That doesn’t always play out, but they got the ball to the rim. They made up their minds, they were going to get to the rim. We got a lot of easy ones there in the second half.”

Garrard County’s offense struggled with Danville’s adjustments on defense, and head coach Ryan Young said it was turnovers that hurt his team the most.

“Really it was the first quarter and the third quarter,” Young said. “Maybe if we didn’t ever have a halftime we would’ve won the game. We come out, turn the ball over first two trips and ignite them. You can’t have live-ball turnovers against that team and we did it a lot tonight. Honestly, after we turned it over nine times in the first quarter, we probably shouldn’t have even been in the basketball game. But my kids fought, they clawed, they just didn’t reward themselves, especially starting the third quarter.”

“I love them to death. We want to get this program into a regional tournament, but my goodness, look where we’ve came from,” Young said. “We’re competing like crazy, we’re right there on the brink of it. Just a couple breaks here and there, couple rebounds we get that they don’t, it could’ve been the biggest upset in the state tonight.”

That’s something that McKinney echoed after the game: Garrard County put up a fight in what is one of the toughest semifinal games in the state.

“That’s what I told them, we haven’t been the favorite like this,” McKinney said. “You feel a little more pressure. Things start going down, but I thought we handled it well. We tried to pressure them early, we thought we could turn them over. We did a couple times but every time they beat it, they got something good and they hit. You’ve got to give them credit.

“I think that’s the toughest first round district game. Congratulations Ads, you’re 6-0 in the district and you get to play Garrard at Garrard.”

The Admirals will face Lincoln County in a Danville/Lincoln doubleheader for the 45th District championships on Friday. Girls start the action at 6 p.m. and the boys will follow.

It’ll be a big atmosphere again, but McKinney said he liked the way his team handled it on Wednesday.

“I think we were much more under control with our emotions, and it didn’t have anything to do with scoring,” he said. “This is a hard district, they’ve got a nice team. Lincoln Friday, it’ll be a good atmosphere. You’ve got to survive, win and move on. It’s never going to be pretty, these 45th District games.”