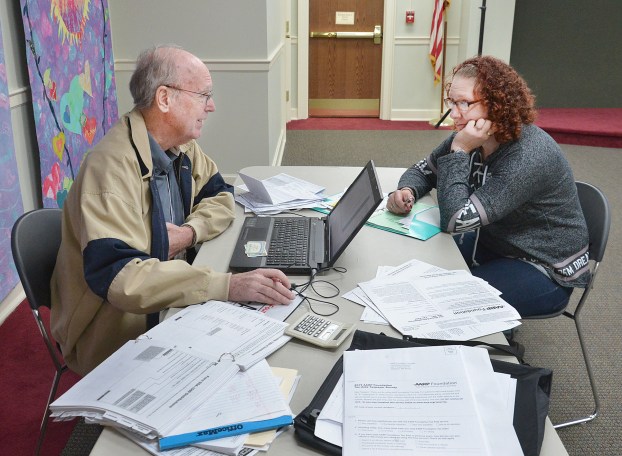 Larry Cecil, an AARP volunteer tax preparer, works with Amber Avery to file her taxes. AARP tax preparation assistance is free and available from 10 a.m. to 2 p.m. at the Boyle County Public Library on Tuesdays. Photo by Robin Hart

Volunteers helping many file their annual returns for free

Filing state and federal income taxes may be a dreaded annual chore for many people, but there is free assistance available in Boyle County. Trained, local volunteer tax preparers with two organizations — AARP and VITA (Volunteer Income Tax Assistance) are now helping folks file their tax returns at no charge.

On Tuesday afternoon at the Boyle County Public Library, AARP volunteer Dave May was preparing George Mellios’ tax returns and e-filing them on the spot. Mellios said he’s used their tax service for a few years and is “very satisfied” with the results.

“I trust these guys,” Mellios said. 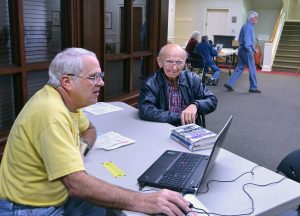 George Mellios waits as AARP tax preparer Dave May looks over his tax return before e-filing it on Tuesday afternoon. Photo by Robin Hart

“We basically can do anybody’s taxes,” Sands said, except in cases that involve rental properties and farms.

Five AARP volunteers are setting up at the library from 10 a.m. to 2 p.m. on Tuesdays, through April 9. Yesterday was only the third day of work, but they had already filed 65 returns. At the end of last year’s tax season, the group had filed 161 returns, Sands said.

“It’s crazy at the beginning of the season. It’s like they think we’re giving away an Xbox,” Sands said, laughing.

People have waited for the library to open for up to two hours, she said, just to stand in line to have their taxes filed for free.

Volunteers have been trained on the new tax codes, Sands said. She was a bit concerned if there would be a decline in people receiving refunds, “But we haven’t seen it so far.”

Sands has been a volunteer tax preparer since 1993, “and I’ve seen a lot of changes. Most of us have done it for years and years.”

Sands was once an accountant, but now owns a poultry farm. She continues volunteering to prepare taxes “because I’m a numbers junkie. I think it’s fun to do taxes.”

May said he’s volunteered to help people with their taxes for about 15 years. He started volunteering because he was bored.

Volunteers like to help people and are always trying to find as much refund money for their clients as possible, Sands said.

Earlier this tax season, someone brought in their tax documents for 2018 and the previous year’s tax returns. The volunteer discovered an error in the 2017 return that a commercial tax preparation business made and was able file for an additional refund, Sands said.

Volunteers receive “the same sort of training” as those who work at some of the commercial tax preparation businesses, Sands said. “But we don’t sell anything. … And we cannot accept payment,” she added.

You don’t have to be a member of AARP, nor do you have to be a senior citizen to use the free local service, Sands said.

They’ve filed tax returns for college students and for senior citizens, who only file returns on their Social Security payments in order to protect themselves from identity theft, Sands said.

The local AARP tax group could use a few more volunteers, Sands said. It’s too late to take the training for this tax season, but someone to greet people and hand out the paperwork would be beneficial now.

The VITA tax program is at the library on Tuesdays from 10 a.m. to 2 p.m. and a couple of the volunteers also work with the AARP tax program, Sands said. “We work together. It’s been really helpful for our clients.”

Cliff Ross who organizes the VITA volunteers said the free tax service creates a positive financial impact in the community. 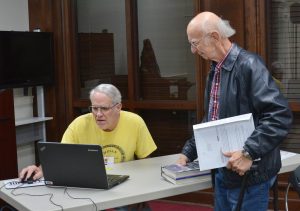 George Mellios is ready to leave as AARP tax preparer Dave May looks over his tax return before e-filing it. Photo by Robin Hart.

“That’s a huge economic impact to a whole lot of individuals in the county,” who may have otherwise had to pay for the tax service, he said.

Several volunteers have worked with VITA for four or five years, and two new volunteers are now helping too.

Other businesses “have speciality training and knowledge that we don’t provide,” Ross said.

“We are augmenting their services. There are other ways to get taxes filed — for free.”

VITA (Volunteer Income Tax Assistance) is 10 a.m.-2 p.m. Saturdays at the Boyle County Public Library. Free tax preparation is for families earning less than $54,000. Appointments are preferred; walk-ins are taken if space permits. Call 211; text KYTAX to 898211 or visit uwbg.org/CKEEP for more information or to schedule an appointment.