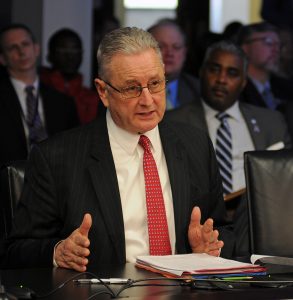 “This is not a soft on crime issue,” said Sen. Jimmy Higdon, R-Lebanon, while testifying before the Senate Judiciary Committee. “This is a jobs issue. That’s what brought me to work on expungements.”

The measure, known as Senate Bill 57, would allow discretionary expungement of additional Class D felonies not involving sex abuse, breach of public office or crimes against children. Higdon, who sponsored SB 57, said it would also include a 10-year waiting period. Another provision of SB 57 outlines how the state would handle expungement requests for crimes committed before 1975 when Kentucky changed it penal code.

Another provision of SB 57 outlines how the state would handle expungement requests for crimes committed before 1975 when Kentucky changed it penal code.

“A lot of times when you plead guilty to a felony you don’t realize it is a little cloud that follows you around for life,” Higdon said, adding that many people were once “young and dumb.”

Higdon said one of the biggest complaints about the current expungement program is the $500 fee to apply for the program. SB 57 would keep the fee but establish a payment program to make it more affordable to low-income citizens.

Senate President Robert Stivers II, R-Manchester, explained that SB 57 would expand who would be eligible for expungements under House Bill 40, passed during the 2016 Regular Session. He said HB 40 already allows for the restoration of voting rights and gun rights to people who have successfully had their records expunged.

Higdon said there have been about 2,000 expungements granted and 300 denied since the enactment of HB 40.

SB 57 now goes to the full Senate for further consideration.

Heart of Danville’s leader is leaving his post here for a similar job in Covington. As Executive Director Nick Wade... read more