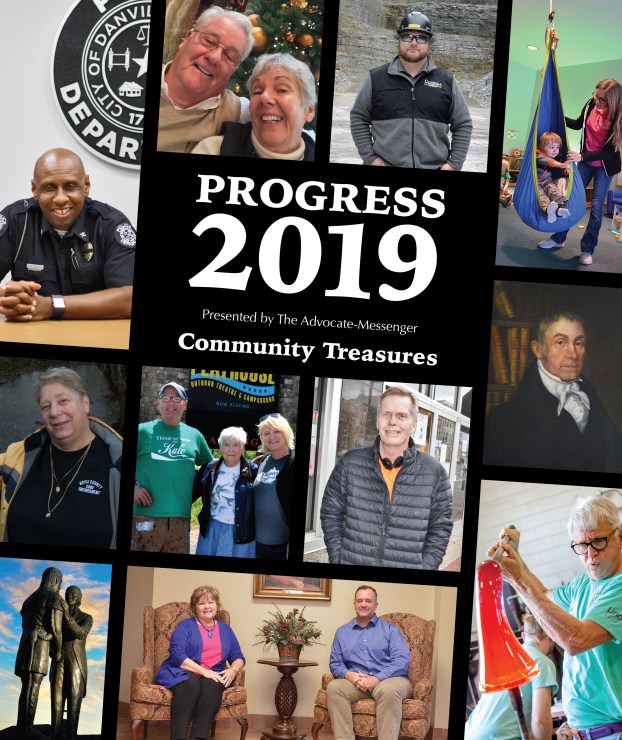 Today, The Advocate-Messenger releases its 2019 “Progress edition,” available inside each copy of the Feb. 23-24 newspaper.

The theme for this year’s edition is “Community Treasures” — the people, places and history that make Boyle County great.

In addition to the feature stories contained within the special publication, the newspaper will continue to publish more “Community Treasure” feature stories in the coming months.

“We could never fit all the people and places worthy of being called a Boyle County treasure in a single magazine,” Editor Ben Kleppinger said. “Continuing our coverage in the pages of the newspaper will allow us to acknowledge many more of the people who have value to the local community.”

Along with Community Treasures features, the newspaper is also highlighting everyday people who make a difference through its “Unsung Heroes” program. Today, the first three people nominated by community members as Unsung Heroes are being published. If you know of someone who is an Unsung Hero in the community, you can email your nomination, including 100-200 words about the person, to michael.caldwell@amnews.com.

“Combined with our One Day feature published every Wednesday and our weekly local feature stories that publish on Fridays, Community Treasures and Unsung Heroes allow The Advocate-Messenger to highlight positive news and shift the spotlight onto the many local people who don’t usually get noticed for the good things they do,” Kleppinger said.

The first three Unsung Heroes are:

Janet Kay Arnold’s nomination reads, “Have you ever known someone who was just THERE for others? That is Janet Kay Arnold, resident of the Villas at Ridgefield Farm.

“Kay was president of the Homeowners Association for a number of years and when she learned of an illness or death (it’s an elderly community, it happens a lot), she was there. An arm around the shoulder, a casserole, a prescription run, or just general hand-holding. Quietly and under the radar.

“A lot of folks go to church, warm the pew, and when they leave the building, all the good thoughts and feelings remain in the pew. Not Kay. She actually walks the walk, and in this world, this environment, it has been very inspiring.

“I can’t even point to a lot of things she does because she does them without fanfare. I find out because the people she has helped sing her praises far and wide.

“Her own health problems forced her to resign from the Board, but even so, she continues to be THERE for those in need.

“She is a widow and leads a simple, happy life focusing much on her son and grandchildren. The Bible says in Proverbs, ‘her children arise up and call her blessed.’ It’s not just her son who calls her blessed — we all do.”

“Boyle County Sheriff’s Deputy Keith Addison has close to 20 years of experience in law enforcement and has truly dedicated his entire career to combat illegal drug use. I have no doubt that Addison’s hard work over the years has saved many lives and taken millions of dollars of illegal drugs off of the streets.

“Addison maintains a deeply respected reputation within the law enforcement community. He works hard in his community to get rid of drugs, all while being a family man and also working a narcotics detection K9. Addison is one of the main reasons I wanted to become a cop.”

“Gail Wright moved to Danville in 1976 from New York. Her husband at the time was teaching at Centre College. In 1980, Gail started working in the Danville Schools, where she served until 2011.

“Gail spent seven years at Toliver in both the gifted and talented position (for the district) and in fourth grade. In 1987, the district created elementary counselor positions and she finished her career in that role for 24 years at Jennie Rogers Elementary, where she served countless students and their families in difficult academic and personal situations.

“Gail has been on the DSEFAA board since 2011 and has been secretary the entire time. In addition to her board duties, she is instrumental in production of Dancing with the Danville Stars.

“Gail has been with CASA for over 8 years, first as a volunteer, then as an employee. She coordinates over 50 different volunteers, while managing a caseload of 15 children as their special advocate. If there is a child advocate event in Boyle or Mercer County, Gail is there representing CASA.”