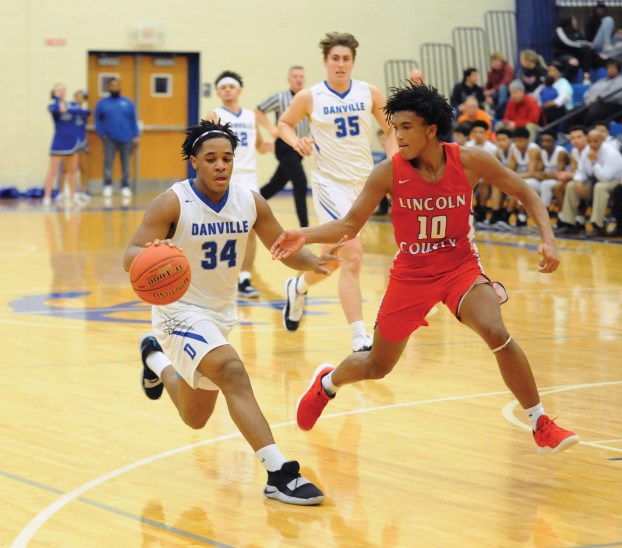 Danville and Lincoln County will represent the 45th District in the 12th Region tournament next week.

The two schools are finalists in the 45th District tournament on the boys and girls side, and the finals on Friday have plenty of storylines.

On the boys side, Wednesday’s semifinals were unique from years past: It was the second time in the past two decades that every team scored more than 60 points in each game.

Friday’s match between Danville and Lincoln County boys could provide similar offense: In two matchups this season, Danville has won both games, 63-47 at Lincoln and 68-62 at Danville.

Wednesday’s games certainly had stars come out: Lincoln County’s Riley Bodner posted a triple double with 18 points, 14 rebounds and 13 blocks against Boyle County. Danville seniors Zach Thornton and DeShaud St. Martin combined for 50 points in their victory over Garrard County. It was a season high for Thornton.

The Patriots will need another strong performance from Bodner on Friday due to Danville’s size across the board. In the team’s two regular-season meetings, Bodner posted 9 points and 9 rebounds in one game and six points and two rebounds in the other.

Danville has had balanced scoring in each game against the Patriots this year: At Lincoln, the Admirals had six players with at least eight points and none more than 13. At Danville, Dante Hayden scored 21 points after shooting the Patriots out of their 2-3 zone at the beginning of the game. He was followed by Thornton’s 14 and St. Martin’s 12 points.

On the girls side, Danville and Lincoln County split games this season, with each team winning at home. The Patriots won in Stanford 79-64 in January, then Danville responded with an 88-85 overtime victory at home two weeks ago.

Danville’s win took a herculean effort from Ivy Turner, who scored 44 points in the victory. Jenna Akers added 26 points (including eight threes) to help topple the Patriots. The Admirals are 23-5 entering Friday’s contest.

The Patriots lost three straight in the first eight days of February, but made a statement win over Casey County last week with a convincing 75-56 victory in Liberty. Emma King scored 26 points, Maddy Boyle added 18 and Trinity Shearer scored 14 to lead the Patriots in the win at Casey.

It was somewhat a redemption victory for the Patriots, who had lost to Casey on Jan. 26 at Garrard County in the Dickie Gilbert Three Bank Classic. Casey was one of the hottest teams in the state entering the game with an 11-game win streak.

Now, the Patriots will have another opportunity at redemption on Friday against Danville. With a loaded 12th Region girls tournament field, the difference between a region champion seed and region runner up is massive. The 45th District runner-up will certainly be the strongest runner-up in the region — Danville (23-5) and Lincoln (22-6) are the two winningest teams in the region this season.