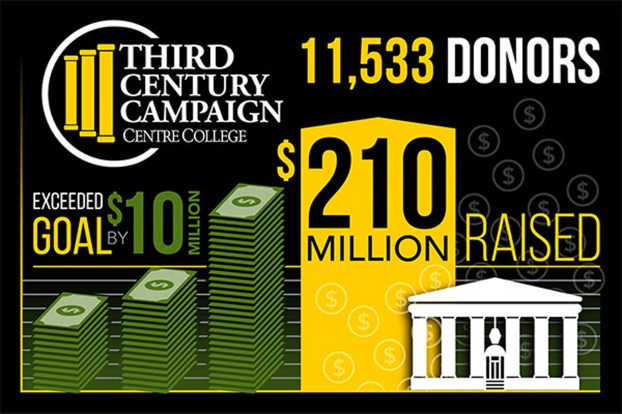 The Third Century Campaign, a five-year drive to raise $200 million to support Centre’s third century of service, successfully concluded Dec. 31, 2018, on the eve of Centre’s bicentennial that begins in 2019. The campaign generated gifts and pledges of $210,184,128, more than $10 million over the goal.

The campaign’s achievements include the Grissom Scholars Program for high-achieving first-generation college students, established by Marlene and J. David Grissom ’60, a former Centre board chair and current Life Trustee. When it was announced in 2014, it was the largest single gift ever made to a private Kentucky college.

The Grissoms also provided an endowment to support academic excellence, including several new endowed professorships and chairs, as well as funds for faculty scholarship and research.

The Lincoln Scholars Program, for students with the capacity and desire to change the world, is another major campaign achievement. Like the Grissom Scholars, there are 10 Lincoln Scholars in each class.

The largest capital project of the campaign is the new South Fields athletic complex, which includes the Andrew P. Amend ’15 soccer field.

The campaign began Jan. 1, 2013, with a “silent phase.” By the time the campaign launched publicly in 2015, it had already raised more than 58 percent of the goal, and by March 2018 the campaign had met its goal — with nine months to go.

The campaign chair was not at all surprised by the outcome of the five-year fundraising initiative.

“The success of the Third Century Campaign is not a surprise to anybody familiar with the history of Centre College,” says Jim Seabury ’87, vice chair of the Centre board. “Once again, the members of the Centre family have surpassed expectations. It is simply what we do at Centre.”

He adds, “We set an ambitious goal when we publicly announced the campaign in 2015 and then set about making it happen. Thanks to the good work of my fellow trustees, dozens of regional volunteers, and the generous response of thousands of donors, we have once again exceeded our own aspirations.”

Shawn Lyons ’81, vice president for development and alumni engagement and the staff member who directed the campaign, agrees, with specific thanks to the campaign chair and other campaign leaders.

“We deeply appreciate the leadership of Jim Seabury, who chaired the Third Century Campaign, as well as the efforts of other trustees and regional campaign committees,” says Lyons. “We launched the most challenging capital campaign in Centre’s history and exceeded our expectations by over $10 million. While exceeding the goal is what grabs attention, the real story of this campaign exists in the way it has elevated the College’s ability to fulfill our mission of transforming lives.”

President John A. Roush sees the conclusion of the Third Century Campaign as an opportunity to look to the future.

“The success of this campaign indicates the confidence all our generous supporters have in the continued trajectory of Centre,” he says.

“But being good stewards of this impressive legacy requires always looking ahead, imagining how we remain relevant and current to the talents required of college graduates committed to an education in the liberal arts and sciences,” he adds. “In the near term, I anticipate some degree of new attention devoted to strengthening our focus on creativity, innovation and an entrepreneurial spirit as a complement to those high-impact practices already part of our DNA, like study abroad, internships, collaborative research and experiential learning.”

Today, The Advocate-Messenger releases its 2019 “Progress edition,” available inside each copy of the Feb. 23-24 newspaper. The theme for... read more