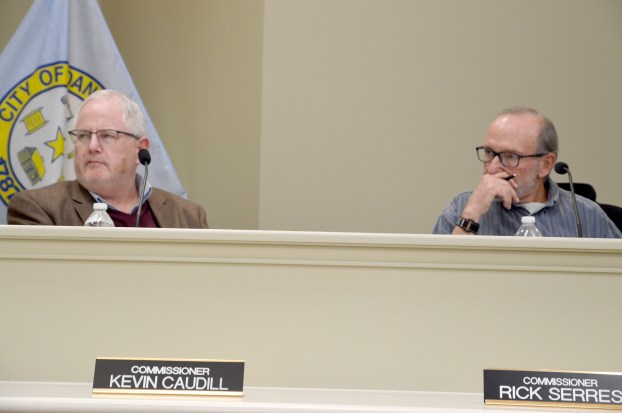 The offer consists of the Parks & Rec agency being operated and administered by the city, with the city and county entering into a service agreement, much like existing service agreements for 911 and solid waste.

City Manager Ron Scott read the agreement out loud during the commission’s meeting Monday night. The city would also agree to sell approximately 1 acre of the recently acquired fairgrounds to the county.

Scott said as a “condition of said sale, the county will sell Whites Park to the city,” with the exception to veterans’ memorial area, which the county would retain.

“The county and the city’s calculation of the purchase price in these two transactions shall be at the rate of $26,000 per acre. The city will not sell any additional acreage from the … fairgrounds property to the county, as such property is required to be retained for other future and necessary public uses by the city,” Scott read.

Municipal Utility Engineer Earl Coffee said the 1 acre is an approximate idea based on “some of the facilities the master plan document said we’re lacking … all of the demands we’re aware of with the property,” such as an aquatic center, he said, which would take up 15 acres.

Scott said he hopes the agreement gets the idea across that “it’s not about control; it’s about accountability,” in regards to recent “robust” conversations held by a joint subcommittee, in which its appointed members (two magistrates and two commissioners) could not come to any agreement about how to proceed.

Scott said the city commission can encourage the county to make a counter offer, but it needs to be “consistent with the basic provisions” of the city-developed parks master plan, particularly that Parks & Rec be operated by one governmental entity.

“If the county doesn’t wish the city to do it, then we’ll let you do it, essentially. If you do it, the director can report to the county …  funding would be continued …” as would be set up in a service agreement, Scott said. “This hopefully will take away the viewpoint that the city is trying to control Parks & Recreation, or trying to control a delivery of service. The control is ultimately vested in how much funds and budget resources are put into capital and operating budgets, and those would be developed jointly by the city and the county.”

The city set a deadline within the ordinance for the county to return any counter offer by 5 p.m. March 6, City Attorney Stephen Dexter said, in order to get the information back on the Wednesday before its next regular Monday city commission meeting date.

Dexter said he’d like to make the point that the way public agencies communicate to one another is “through resolution. So this body has yet to act upon a formal proposal, so this is not the 10 Commandments written in stone, it is but a malleable document to be sent to the county for consideration. It will either invite acceptance or a counter offer.”

He said the agreement is important to present to fiscal court because afterward, “the city can act appropriately on whatever action the court takes formally, as a court, as opposed to the individual preference of the judge, or one or two of the magistrates for that matter.”

Dexter said what is missing from the document is the request for certain properties to be swapped, “and those discussions seemed to digress the conversation in a way that was not palpable to either side,” pulling attention away from the real business at hand. The value of Millennium Park or the value of the Redrier Lane property discussed previously has no effect on the services offered by Parks & Rec, he said, which is what needs to be prioritized.

“The city would also be willing to strip all real estate from the transaction whatsoever, so that could be part of the county offer if this is not acceptable to the magistrates,” Dexter said.

Dexter said since the resolution was passed, it would be sent to Judge-Executive Howard Hunt Monday night, in hopes it would be presented to the fiscal court during its Tuesday-morning meeting.

Dexter said, “There was significant conversation about the amount of the contribution of either party to Parks & Rec’s annual budget, and no two commissioners or no two magistrates possess the ability or legal standing to come to agreement on, so that’s not in this agreement.” He said a more logical and rational proposal would be to simply allow the staff of the county and the city to develop the annual budget to be accepted by each public agency.

“So that’s an attempt to back up and say … Let’s agree to as much as we possibly can, and then let the professional staff of both public agencies iron out the details,” Scott said.

Under the city’s proposal, the Parks & Rec director would be hired by the city as a city employee, with the Parks & Rec Board functioning as an advisory committee. Scott said this is “so as not to encumber those willing to serve with personnel issues, commercial contracting and financial management of significant tax dollars,” allowing them instead to focus on programming recommendations, implementation of the master plan and prioritizing capital needs.

Dexter pointed out that the restructuring of the Parks & Rec board as more of an advisory committee was actually advocated for by its chairman at the first subcommittee meeting.

“It will allow them to get back into what was probably the reason they agreed to serve … to help with programming and prioritize the master plan and prioritize capital needs, as opposed to serving as a human resources department, a financial management department — things that citizens aren’t equipped to do in the landscape we have today in human relations and governmental contracts.”

The “advisory committee” would still consist of members from both the city and county, Scott said. The service agreement, which would be reached in later discussions between the city and county, would allow a jointly supported budget, with the operation of the trails to be managed by the city.

The agreement requires the city and county each to repeal their ordinances pertaining to the formation of the existing Parks & Rec joint agency.

Scott said he hopes the discussion can begin to move forward, since the agreement simply offers the two bodies a chance to “get together and administer the Parks & Recreation programs for all citizens of Boyle and Danville without getting into rate differentials as far as access to the parks. And that’s the proposal.”

Commissioner Rick Serres, who was appointed to the joint subcommittee, also commented about the back-and-forth between the two governments over the Parks & Rec situation. He said he hoped the city’s proposal would open the door to an agreement.

Mayor Mike Perros said as far as who manages Parks & Rec, “It matters not to me who manages it … What matters to me is that we’re getting our money’s worth out of this existing investment.”

“There’s no reason to go forward in the spirit of confrontation. We’re doing it to have the best Parks & Rec system we can have, for adults, children, whoever. Let’s do it together.”

Commissioner J.H. Atkins said he didn’t want to go back and rehash what had happened previously. “A lot of things I’ve read about the last week or so, we’ve never discussed them as a commission. So why someone feels like they’ve had this done to them or that done to them, where I sit on the commission, there’s a lot of things out there that are rumors.”

Felons on work detail found a loaded gun. They immediately turned it in.

In what many would probably see as a surprising turn of events, two state inmates found and turned over a... read more