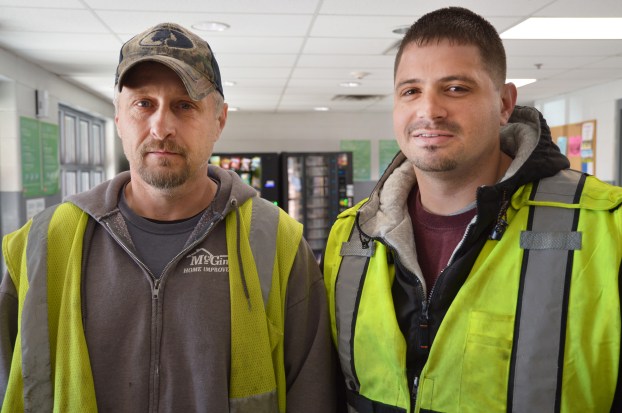 (Photo by Bobbie Curd) Steven Flatt, left, and Justin Sizmore are state inmates at the Boyle County Detention Center who found a loaded .22 while on work duty.

Felons on work detail found a loaded gun. They immediately turned it in.

In what many would probably see as a surprising turn of events, two state inmates found and turned over a loaded handgun while on work detail. However, those who work with the two men daily say the fact of what they did really isn’t surprising at all.

Last week, Steven Flatt and Justin Sizemore were working on Chrisman Lane, something they do — and look forward to — quite often.

“We were picking up trash, like we always do,” Sizemore said from inside the lobby at the Boyle County Detention Center. He said right after they finished with a break, they got empty bags and returned to the roadside.

“Steven was on this side of me, we were using pickers. I looked down, and I thought it was a kid’s BB gun. It was in a holster,” Sizemore said. He picked it up by the handle, since there was no strap on the holster, then found himself taking a step back …

In his almost 30 years supervising road crews for the recycling center, Madox said he’s never known of any inmates finding a gun before.

Madox took the fully-loaded clip out, as well as a bullet that was in the chamber — the gun had been lying there, loaded and ready.

“I knew to put a zip tie where the shells go in because I’m a hunter and deal with guns, so I know what to do,” he said. Then he called the sheriff’s office.

Sheriff Derek Robbins was out of town Monday and just hearing about the incident, but said it sounded like the men handled the situation well. “Typically, if something like this happens, we’ll check the serial number for being stolen, then hang onto it for a while,” he said.

Eventually, if the gun isn’t claimed, it will be sent to the Kentucky State Police to be destroyed.

He said unloading the chamber and clip was a smart move, but not everyone knows how to safely do this with a gun. Robbins said if anyone ever finds a gun, it’s best to leave it be and stand by the scene until authorities arrive to handle it. “But it sounds like they just did fine, in this case.”

“Yeah, we told Marty immediately,” Sizemore reiterated. “I mean, we’re already convicted felons, we don’t want to get in trouble. And we didn’t want a kid to get ahold of it and get hurt. We didn’t know; it could’ve even been used in a crime.”

Jailer Brian Wofford said the jail does have some violent inmates, but not all of them are.

“These guys aren’t,” he said, looking over at Flatt and Sizemore. “That’s why they were able to come out and work.”

Going on work detail not only saves the county money, it gives the guys a change of scenery and something to do to keep their minds off things, Wofford said. “It helps their time pass faster, and they earn a little money while doing it.”

Although Wofford also wasn’t surprised by the two inmates’ actions, he said he’s proud of them.

“They could’ve tried to pocket it” and conceal it to bring it back into the jail, he said. Or worse — tried to use the fully loaded handgun to escape with. “I’m very proud of them.”

Wofford said the two men will receive some free phone time as well as pizza to commend them for doing the right thing.

“We hold them accountable for their actions — they get consequences for good things, too,” Wofford said. “These two guys here — I don’t know what they’re charged with. They committed a crime but they’re not to be mistreated. They’ve got a mom somewhere who cares about them.”

“I’ve got a little boy. he’ll be 5 years old when I get out. This place grieves me to death knowing I messed up,” Flatt said, looking off for a minute. He said he thinks about how his actions affect others.

Flatt added, “Maybe reading about this, or just knowing it happened, will help others make the decision to do the right thing.”

Sizemore has two more years to serve, and thinks people will be surprised to know, “I’m in here on a gun charge and a robbery charge. I was talking to my mom about it — I messed up, sure. But I’m trying to do things better. You’d never think someone with a gun and robbery charge would return a gun. But we did.”

Both the guys say they really like doing jobs for the recycling center.

“I like it — getting out and picking up trash,” Sizemore said. “It eases my mind. And it keeps the roadways clean, so I feel like I’m doing something good.”

Flatt said Solid Waste Director Angie Muncy and her team are good to them, too. They both say Muncy walks through often and talks to the guys just like they’re regular employees.

“She’s a good woman,” Flatt said. And they like reporting to Madox.

“I can tell whether they’re going to be pretty good inmates, or if they’re not,” Madox said. “Those two — they’re pretty honest two boys.”

Wofford said he’s working to bring some additional programming into the jail for state inmates. “We want to add more … so we can keep the good ones here,” like Flatt and Sizemore, he said. “The ones who want to work and make a difference.”

Two programs that will soon be put into place are MRT, which stands for Moral Reconation Therapy, and Portals New Directions, both of which work to reduce recidivism by offering therapy and other kinds of assistance. Wofford has received approval from the Department of Corrections to move forward with the programs, and he and his staff will be trained on them soon.

The programs work with state inmates who have already been sentenced and have completed the SAP drug program the county runs for the state in-house at the jail. There will be incentives offered for those who complete the programs.

“This will be a good move for us, because it allows us to work with those state inmates who really want to look at their past choices, get into a program that helps them figure things out, and how not to make the same mistakes going forward,” he said.

In the near future, Wofford said he will offer a more in-depth update to the Boyle Fiscal Court about those programs, as well as to the Mercer-Boyle County Joint Jail Committee.

Wofford also wants to get an in-house drug treatment program for county inmates.

“I’ve talked to people at the state level, the state auditor’s office and the county attorney,” he said.

The program would have to be approved by the fiscal court. After that is achieved, Wofford wants to look into the possibility of contracting with an outside company or a person to run the program in the evenings.

He said the in-house drug treatment for county inmates will only be offered to the ones who are final sentenced.

“They have to be sentenced and have to be housed here, so they can complete the whole program from start to finish. We don’t want to get them in it just to do it part of the way; it’s a comprehensive deal. If they don’t finish it, it’s a waste of time and money, and they just don’t get anything from it.”

By BOBBIE CURD and ROBIN HART advocate@amnews.com The Community Arts Center may be spreading more color around Danville, thanks to... read more