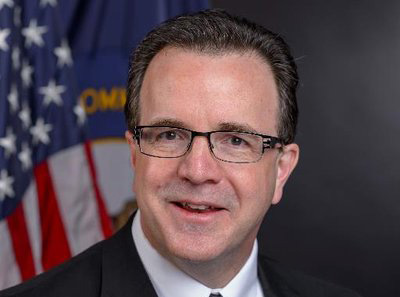 There wasn’t any major flooding in Boyle County Saturday night, but Kentucky Auditor and Boyle County resident Mike Harmon avoided a mudslide, waded through a flooded road and even lost his vehicle due to high waters as he was traveling in the eastern part of the state.

Harmon, along with two friends, had just left the Pike County Lincoln-Reagan Dinner Saturday and were heading back to central Kentucky when a mudslide shut down a portion of the Mountain Parkway.

On Monday, Harmon, who is Kentucky’s auditor of public accounts and a former state representative for the 54th District, was warm, safe and dry when he recounted his cold, wet experience near Salyersville.

Because of the mudslide, traffic was being diverted off of the parkway onto side roads in Magoffin County, Harmon said. And the town of Salyersville was flooding.

He was driving his 2015 Chevy Sonic on a back road and it was dark, when he suddenly hit a flooded spot which was much deeper than he realized. He had to quickly decide whether to slam on the brakes and try to back out, which could make the car stall. Or he could continue forward, which he tried. But the car stalled anyway, he said.

Harmon said he took off his shoes and was going to push the car out of the water with the help of his two passengers when a man in a rough, old pickup truck stopped and offered to hook up a chain and pull his car out of the way. But the man couldn’t find a place to hook.

In the pouring down rain, with water up to their knees, the man offered to take Harmon into Salyersville to find help while his two friends waited on the bank.

It took a while to find any tow trucks that were available, “because they couldn’t get out either,” Harmon said.

He was taken to a convenience store where got a bite to eat and a pair of sneakers and contacted Rep. John Blanton, who had a friend that owned bed and breakfast in town for the men to stay in overnight, Harmon said.

The road where he had left his car and two passengers had been shut down by this time. The men had walked to where sheriff’s deputies were stationed at a blockade, and the deputies took the men into town, where they dried off and got some sleep, Harmon said.

On Sunday, Blanton loaned Harmon his car because Harmon’s vehicle had been destroyed by the flood.

“It was an interesting and late night,” Harmon said.

The state auditor said he really appreciates “the wonderful individuals in Magoffin County. They were so nice. … It was wonderful that everyone pulled together.”

He wasn’t scared, Harmon said, but he was very concerned about the situation.

“You can replace stuff” but not a life, Harmon said.