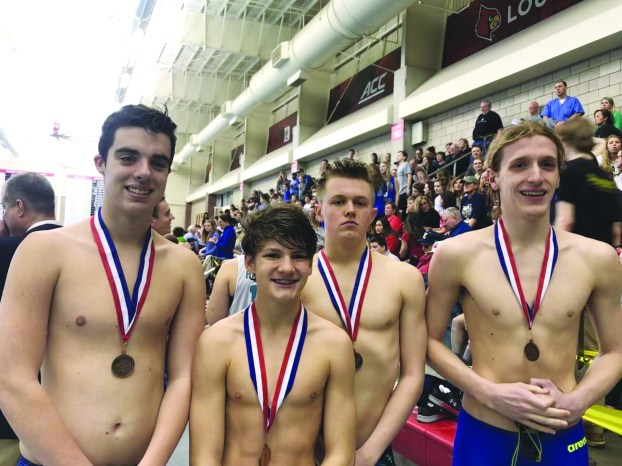 Boyle County finished its swim/dive season on a high note over the weekend.
Jared Stivers was the top placing Rebel at state, securing third place in the diving competition.

“He had missed one of the dives of the guys who had been ahead of him and didn’t realize he had passed him in the standings until they announced the conclusion to the meet,” Boyle head coach Crystal Ellis said. “We all knew he was third, but he didn’t. Seeing the surprise and joy on his face was priceless.”

Boyle’s girls 400 yard freestyle relay (Riley Cerqueira, Sophia Fogle, Cora Gilbert, Jaye Farthing) placed 18th and broke a school record (3:49.68). The record was set in 2006, when former Boyle assistant coach Maddie Larson was on the team. Larson was there to cheer on her alma mater.

“We had some kids sick this weekend, but they rallied for their team and still swam fast,” Ellis said. “There was a new format to the state meet this year and it was hard for the swimmers. In the previous years they have had a day to rest in between prelims and finals. This year prelims and finals were the same day, so they had only a few hours rest in between.

“It was hard on them. About half had never swam that type of format before and it was a challenge to swim fast in the morning and have to come back just a few hours later to swim fast again.”

The girls’ 200 yard medley relay (Cora Gilbert, Isabella Spencer, Whitney Bean and Riley Cerqueira) placed 17th. It’s a relay made up of entirely freshmen and sophomores — one of two teams in the top 17 to have no upperclassmen on the relay.

“It will be exciting the next couple of years to watch them improve and move up in the rankings at state,” Ellis said.

LANCASTER — Jaxon Smith had one of the best games of his young high school career. But in the closing seconds... read more