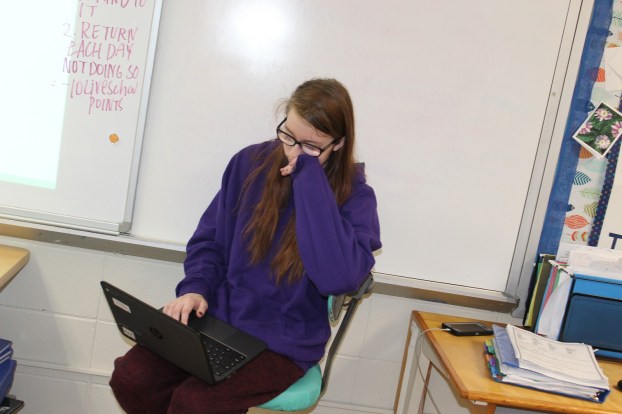 (Photo by Jamie Price) Kat Bagwell edits an essay for her English Class on her Chromebook.

Danville High School, like most high schools, has a lot of students addicted to technology like their phones with texting and snapchatting. This year, DHS introduced Chromebooks, another type of technology many students are finding addictive in other ways, such as watching Netflix.

In addition to teenagers’ tendency to overuse technology, the school was found other issues with going one-to-one. For example, students frequently forget them at their house and are not able to do their work.

However, despite this obstacle, Beauman still sees Chromebooks as a positive for our school.

“It’s a very realistic responsibility and will help students after high school. Teachers won’t be there to keep track of their belongings, and it’s responsibility for students to learn to manage.” He added, “students got Chromebooks so they could learn computer skills and to help reduce the use of paper as well as learn to stay more organized.”

Furthermore, students are able to use technology more frequently to complete meaningful work in a timely manner. Beauman said, “It’s easier for students to have Chromebooks than having classes go to the lab.” Before this year, DHS had two computer labs and a few Chromebook carts to serve the entire school.

She also admitted, “I have forgot my chromebook at my house three times.” However, Bagwell sees a need for this technology in the classroom, “The need of Chromebooks is so we are able to work on classwork when we need and wherever we are and to use them for studying.”

Timmy Oxley, another student, said, “The need of Chromebooks are because to make work more portable because if we go to the lab we can’t do our work at home if we don’t have internet.”

All together, Chromebooks are a good idea because we, as students, can take them home to do our school work and not have to worry about getting a zero for our work because some people don’t have internet at home to do their school work.