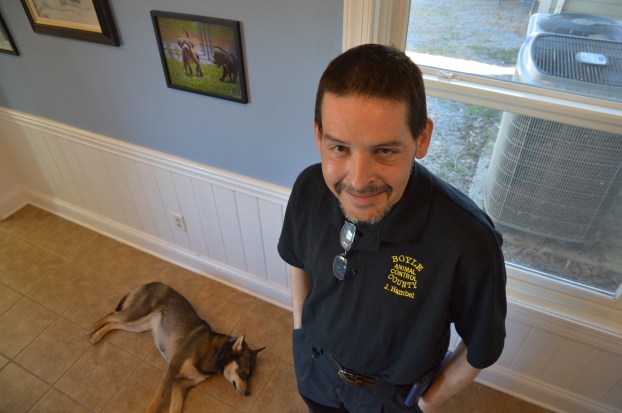 John Hambel is not only the animal control director but also the shelter manager for the Danville-Boyle County Humane Society. He even adopted a dog, Sasha , from the shelter about a month ago. Now, Hamblin is rarely seen without Sasha at his side.

There’s a multitude of tasks that go into John Hambel’s daily work as not only the animal control director but also the shelter manager for the Danville-Boyle County Humane Society. But he wouldn’t have it any other way. 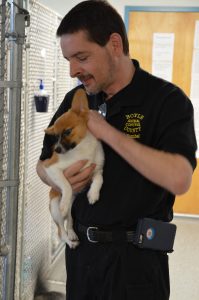 John Hambel spends a lot of time with the animals, making his rounds each day, checking on their progress and well-being. The dog area can get pretty loud, with jumping pups and others barking for attention, but most calmed down immediately when Hambel approached their cages. “When they get adopted, it makes it all worth it. Those are the good days.”Photo by Bobbie Curd

“This entire place works because everyone is on a team. We all function together, which is very wonderful,” Hambel says.

You’ll never hear “that’s not my job” around the shelter, he says, because everyone jumps in to do whatever’s needed.

The humane society is a nonprofit. It owns the building, but the county runs the animal control part of the operation. “There’s basically two entities here, but we run very smoothly together,” he says.

“We were on call 24/7, every other week,” Hambel says. Now, with the addition of ACOs James Goode and Jacob Wardip, it’s a bit easier with being on call every third week, he says.

Hambel meets with Goode and Wardip at 8 every morning, before the shelter opens to the public at 8:30, to discuss what’s happened after hours. Then, he begins dispatching them to certain areas where complaints come in from.

He does a regular, morning walkthrough to check on the dogs and cats, deciding which are ready to be sent off for surgeries in order to be prepared for adoption. Stray animals brought in are photographed and posted on the “lost and found” section of the website, then kept on a seven-day hold to allow owners to reclaim them.

Hambel says what most may find surprising about his job is that the shelter not only deals with dogs and cats, but anything not human. He tells the story of being called to get a beaver out of a doghouse; or to retrieve an injured fox, which was out in the daytime and “not where he was supposed to be.”

The shelter has a six-page listing of private volunteers who do rehabilitation services, which is used regularly when animals out of the norm are taken in. On Monday, there was a large, gray rabbit in a back room where cats are kept that need medical treatment. Someone had surrendered the rabbit. They’ve taken in guinea pigs, birds, hamsters, pet pigs ….

Hambel walks down the hallway with Sasha in tow, a mixed-breed dog he adopted a month ago. She needs no leash; Sasha stays by Hambel’s side, even laying outside of an office door he is behind, calmly waiting for his return.

“They don’t judge us,” Hambel says, looking down at Sasha. “They’re loyal, but they’re still like kids, though — they still need to be taken care of. They’re part of your family, and give unconditional love.”

Nothing surprises him anymore to see in a day’s work. But he is still amazed at the number of people who will bring in “stray dogs,” which staff can tell are clearly pets.

“For some reason, people don’t want to admit they’re giving up their animals,” Hambel says, but it actually hurts the animals’ chances for adoption, due to the required seven-day hold.

“If they would be honest with us, we could start the process much sooner,” Hambel says, like getting the animals in to see a vet, getting microchipped and other adoption preparations. The biggest reason, by far, they get for animal surrenders are due to tenants moving into a new living space that doesn’t allow animals.

The worst part of his job is performing euthanasia. “Our aim is to be a no-kill shelter, and we’re on our way to it. I’m excited when the kennels are empty. It makes my day.” As of now, DBCHS has a 90-percent adoption rate.

Goode asks Hambel about how to handle a pet owner who they’ve made several visits to due to complaints about their dogs running loose.

“We do cite, but our No. 1 goal is to educate,” Hambel says. They generally follow a three-strikes and you’re out policy. After attempting to educate a pet owner and offering solutions twice, they will cite on the third visit.

Hambel feels like the attempt to educate pet owners is working; five years ago, there were eight different court cases going on due to owners being cited. At the present time, Hambel says there is one. 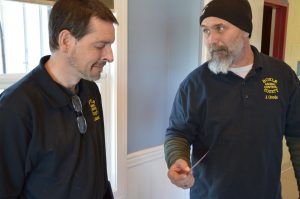 John Hambel talks with animal control officer James Goode, right, about a person who’s caused several trips out to warn them about their dogs that keep getting loose. Hambel says they normally cite on the third strike for general complaints, because he finds offering education more effective. He and other staff work with pet owners about responsible ownership, and ways to solve problems that avoid euthanasia. Photo by Bobbie Curd

“When you get cited, you have to go before a judge — it’s serious. You can even get jail time, but that’s only happened one time since I’ve been here.”

Most complaints are about irresponsible ownership, such as emaciated dogs; animals without shelter, food or water; and dogs running loose. Hambel says the shelter works closely with Danville Police Department and Boyle Sheriff’s Office in cases, as well. If someone is arrested for a DUI with their dog in the car, Hambel and team are called to take them in until someone is able to reclaim them.

Robby and Heather Warner stop in to talk to Hambel; they volunteer at a nearby county’s shelter and are inquiring about opportunities at DBCHS.

The biggest message he tries to get across is to spay and neuter pets. It’s just responsible pet ownership, he says; it just makes sense.

“If they spent the day here, they’d realize the need.”