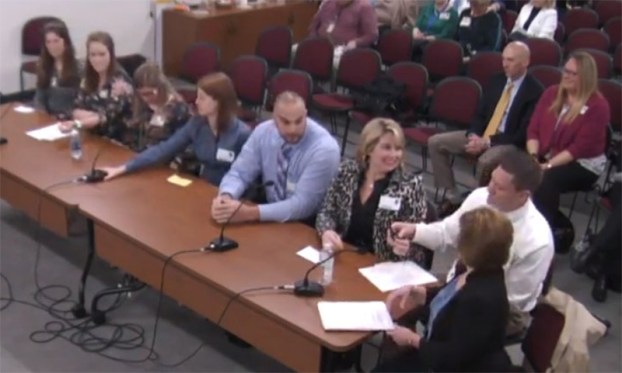 A unique special education teaching model used by the Boyle County Schools has been so successful that the chair of the Kentucky Board of Education says it gives him “goosebumps just thinking about it.”

A group of 10 from Boyle County gave a presentation about the district’s “SHARED Learning” approach to the state board this month.

Using the SHARED Learning approach, which was developed by Boyle County educators, the district has seen across-the-board reductions in the number of students scoring poorly on reading and math assessments, Assistant Superintendent David Young told Kentucky school board members.

Kentucky groups students into four performance levels based on their mastery of educational concepts: “Novice” is the lowest level; “apprentice” is second; “proficient” is third; and “distinguished” is the highest level.

Boyle County Schools
The percentage of elementary school students performing proficient or better (green and bright green) in math has increased from around 30 percent in the 2013-14 school year to more than 50 percent in the 2017-18 school year, during which time the school district has been using its “SHARED Learning” teaching model for special education students. The percentage of students in the lowest-performing category of “novice” (orange) declined over the same time period. By comparison, as a state, Kentucky’s elementary math performance remained largely steady.

• During the same five-year time frame, state averages for novice scores were almost flat and in all cases well above the Boyle County percentages.

Jane Paynter, the district’s director of special education, told state board members that Boyle County “struggled … for years” with how to help students overcome gaps in their learning and improve their understanding of reading and math.

“One of the major things that we really focused on was student engagement,” Paynter said. “We really felt like that our students weren’t engaged enough in the classroom and we had situations where we were maybe creating more gaps by not having engagement.”

“Engagement is just eliminated … as a barrier,” he said. “… You can imagine, if engagement is higher, achievement also becomes higher and classroom disruptions become lower. We’ve seen that play out in classroom after classroom, school after school.”

Young said special education students now spend 100-percent of their instructional time in reading and math in “a safe, small, comfortable group of six, seven eight other students and a teacher.” The teachers use “bite-sized chunks” of lessons and then conduct assessments immediately after to see if the students picked up the new knowledge.

“It has completely changed the student experience and the way they view education,” Young said. “I think that’s been a huge impact.”

One question from the state board concerned how expensive implementing the SHARED Learning model would be if other districts wanted to follow Boyle’s lead.

“I don’t know that it has more staffing than a traditional model. We had to reallocate our thoughts on things,” Paynter said. “… You plan and you allocate your staff appropriately. The way we schedule, it really doesn’t require much more staff.”

Another board member commented that “response to intervention” or RTI programs around the state have not helped reduce novice scores as state officials had hoped, contrasting Boyle’s success with flat results statewide.

Young said in traditional RTI models, students in need of extra help are pulled out of class and given intensive instruction in the area of need.

“When they’re pulled out, those prerequisite skills are being addressed, but … they aren’t connected to the learning in the classroom,” Young said. “So I think sometimes inadvertently, by pulling them out and providing that, you close one gap but another gap is created from them not being in the classroom.”

Boyle County Superintendent Mike LaFavers said the improvement in student performance at the elementary level is carrying through all the way to high school and graduation.

LaFavers credited hard work from many in the district with making the dramatic change possible.

“We have a lot of strong teachers in the district,” he said.

Kentucky’s Commissioner of Education Wayne Lewis was impressed by what Boyle County has accomplished.

“Every kid regardless of level is getting access to that core instruction,” he said. “… I think that’s a huge part of the model.”

Kentucky Board of Education Chair Hal Heiner was similarly impressed.

“The magnitude of what has been accomplished … in a very short timeframe, I can tell you, blows me away,” Heiner said. “… I can’t remember the last time I’ve ever seen a move like that. The boldness to come up with a new model, the courage to actually implement it — I know it’s exhausting work, but what a legacy your team is leaving behind.

“And the difference in those children’s lives — it gives me chills, goosebumps just thinking about it.”

There’s a multitude of tasks that go into John Hambel’s daily work as not only the animal control director but... read more