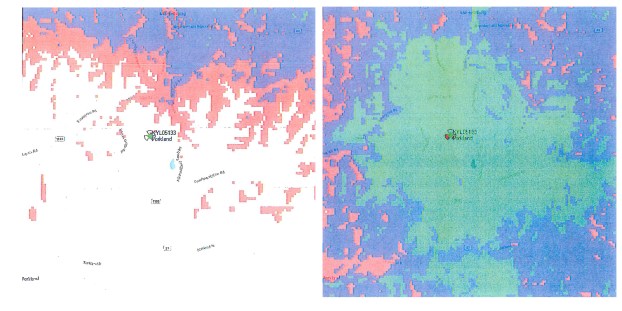 Graphics courtesy AT&T A pair of signal-strength maps show what current signal strength looks like in the Forkland area, left, and what signal strength is expected to look like after construction of a 195-foot cell tower near Whites Ridge Road, right. Green is strongest signal; blue is weaker signal than green; red is weakest; and white is no service.

The new tower would dramatically increase and improve cell-phone service in the southern portion of the county, where there is very little to no service currently, said Robert Grant, an attorney representing AT&T who testified during a public hearing before the Danville-Boyle County Planning and Zoning Commission. 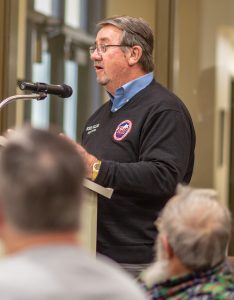 Ben Kleppinger/ben.kleppinger@amnews.com
Mike Wilder, emergency management director for Boyle County, testifies in support of a proposal to build a cell tower in the Forkland community.

“This technology is a matter of public convenience. It makes our lives easier. But more importantly, it’s a matter of public safety,” Grant said, explaining that nationwide, 71 percent of 911 calls are made from cell phones and more than half of homes now do not have a landline phone connection.

The P&Z Commission unanimously approved AT&T to proceed with the tower project, which Grant said is one of 300 rural tower projects AT&T is working on in Kentucky.

“In the past, our deployments tended to focus on urban areas,” he said. “… What got neglected are the nooks and crannies of the county.”

Grant said he couldn’t estimate when construction of the cell tower would begin.

“We’re building these things as fast as we can but we’ve got a bunch of them across the state,” he said. “I can’t say exactly when that would be.”

Once the Boyle County project rises to the top of AT&T’s list, the construction itself would take about two to three weeks, Grant said.

The tower would provide 4G levels of service, and it would enable AT&T to sell wireless broadband service for homes in the area, he said.

“Flooding is one of our major issues and Forkland is inundated with floods,” he said, explaining how he once got trapped with water rising on either end of the road while he was responding to a flooding event in Forkland.

Boyle County uses a system called Code Red to send emergency notifications to people with cell phones. But “those people on the Fork don’t have any capabilities of getting that on their cell phone because they can’t get coverage,” Wilder said. “It’s been an issue over there for many, many years and I just applaud whomever was able to get this ball rolling to get it to where it is today.”

According to an issue brief on AT&T’s website, “AT&T has been helping to meet the connectivity needs of customers in largely rural areas and to expand the opportunities enabled by internet access” through participation in a Federal Communications Commission program. “By the end of 2020, AT&T will have used funds from this FCC program to help deploy, maintain and offer internet access and voice services to 1.1 million mostly rural homes and small business locations in FCC-identified areas.”

The tower was approved to be built on a 100-acre property owned by Alvin and Martha Lee off of Whites Ridge Road. The nearest tower to the area is 4.5 miles away, and the nearest residence is about 1,900 feet from the proposed site.

The tower’s planned height is 195 feet, placing it below the 200-foot height threshold at which lights would be required to alert aircraft to the tower’s presence, Grant said.

The Danville-Boyle County Airport is 10 miles from the site.

“This is not going to pose any safety (issues) to air traffic,” he said. “And there won’t be any blinking lights on it that will be shining in anyone’s windows at night.” 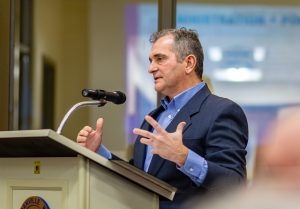 P&Z Commissioner Vince DiMartino wasn’t convinced that leaving lights off the tower was a good idea. It may be 10 miles from the airport, but the location seems to be in the “safe zone” to the west of the airport where planes are often approaching or taking off, he said. And the tower would be located on top of one of Boyle County’s knobs, placing it substantially above the airport’s elevation, he noted.

Grant said AT&T would be OK adding lights to the tower if necessary. DiMartino ultimately made the motion to approve the tower project, conditional on AT&T presenting the plan to the airport board. Grant agreed to DiMartino’s condition and the motion passed without opposition.

One neighbor had a question about whether approval would create easements for AT&T on his land; Grant assured the man the entire project was contained within the Lees’ property lines.

Grant and Hunter said officials had fielded some calls from neighbors concerned about the project, but Grant chalked it up to a confusing map showing which property owners must be notified about the proposal. Some thought the map was showing easements on their properties, he said.

No one testified in opposition to the project at the hearing.

A unique special education teaching model used by the Boyle County Schools has been so successful that the chair of... read more