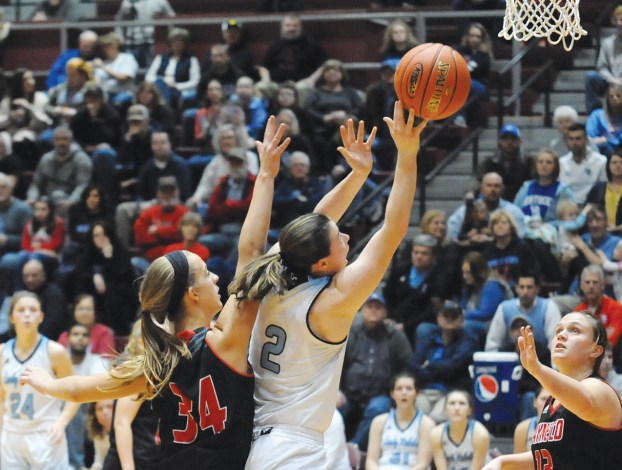 The Rebels earned one of the tougher first-round draws in the 12th Region tournament but took care of business Thursday, defeating Wayne County 70-37 behind a 22-point performance from Lauren Lee.

“We know that during tournament time, anything can happen,” she said. “I was talking to somebody earlier, my first year coaching we were the 1-seed going into districts and got beat by the 4-seed. Anything can happen. They’re a good team, they’re young. We knew we had to come out and play a solid game in order to compete and to win.”

That hasn’t always been the case for the Rebels this year, who saw expectations rise after a 12th Region finals appearance last year. But Weddle said her team has grown accustomed to higher expectations this year: The Rebels have won 14 of their last 15 games.

“It has been a rocky year, up and down,” Weddle said. “We’ve struggled mentally with the expectations of being a better team and people putting pressure on you to win. Not necessarily us, but the girls have dealt with that. I think we’ve overcome that, they know we have to play one game at a time and nothing can happen until that one game is taken care of. Right now our only focus is the next game.”

That next game will be Danville, who ousted defending state champion Danville in Thursday’s second game. Casey defeated the Admirals 99-97 on Feb. 12.

Weddle said she wants to see that same drive from her team — and Lee — during the region semifinals on Sunday.

“Lauren is an engine, we call her our gas pedal,” Weddle said. “We had a conversation with her in practice, when we practice she takes over like she did tonight. We asked why she doesn’t do that in a regular game, why only in practice? I’m hoping that kick-started her mentality that she can get to the rim whenever she wants.

“When she’s attacking the rim and requires help, that opens Gena Beth (Cravens) up to shoot outside. The past couple of games, Gena Beth has had a chaser on her and if Lauren’s not attacking the rim, that takes away two scorers.”