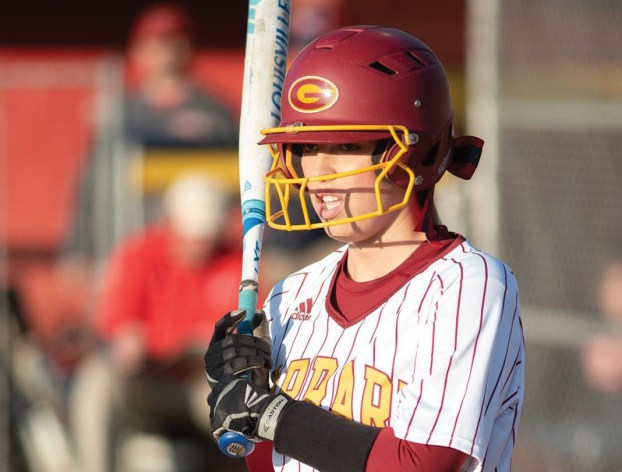 LANCASTER — After hearing a school announcement about a potential scholarship for athletes, Garrard County senior Brynne Galloway decided why not take the time to fill out the application since she felt she met all the criteria for the Louis Stout Memorial Fund for Students.

Not only did she meed the athletic, academic and extracurricular requirements, she won the $2,000 scholarship named in honor of the former Kentucky High School Athletic Association commissioner.

Galloway had to write a short response on the role of student-athletes for the scholarship. She noted that for student-athletes, academics have to come first like they have for her.

“I played four sports but I always focused on being a student first,” the Garrard senior said. “Academics always came first. If you don’t focus on academics first, you can’t put all you can on the field. You go to school and then you go to the field.”

However, the next portion of her written response on community involvement was unique to what other applicants might have submitted.

“If the community knows the athlete and what good you have done, then they might be more accepting to support and encourage local athletes,” she said. “If you play a good role in the community, then it can help others support your school and athletics.”

She was a middle school basketball player, played volleyball, has been on the softball team for four years and joined the bowling team as a senior. She said the diversity of participating in four sports “helped me personally” and she suspects it might have also helped her win the award.

Her brother had bowled his senior season at Garrard four years ago and it was a “fun, social thing” for him. She thought it could be the same for her.

“Bowling wasn’t a sport in my mind that I couldn’t just pick up as a senior. Some sports I would not dream of just picking up as a senior,” she said. “But I had friends on the team and I loved it. We were a young, inexperienced team. Not a bunch of true bowlers, just friends having fun.”

She had bowled only a few times before joining the team but did manage a high game of 171 and her team actually finished second in the regional tourney qualifying round.

“I am not the most talented player,” Galloway, who plays right field and says her hitting and fielding skills are about equal, said. “I will give you my all and make sure I leave it all on the field. I am just one of those players who is not the most talented but I try to keep the whole team together and keep us all positive. We have five seniors on the team and we are all close friends and have big expectations this year. We are willing to work to go as far as we can this year.”

She is a “talented” student. She has a perfect 4.0 grade-point average and plans to attend Eastern Kentucky University where she’s not certain about her major yet.

“I have always been a math nerd,” Galloway laughed and said. “I assume my major will involve math. Maybe something in the business field.”

She’s a member BETA Club, National Honor Society, Student Council, Science Club, Future Farmers of America, Fellowship of Christian Athletes and FCCLA (Family, Career and Community Leaders of American. She’s been president of FCCLA and class president as a freshman, sophomore and junior. She’s also volunteers as a camp counselor for Ephraim McDowell’s Camp Can Do and Camp Healthy Kids, and helped set up a fundraiser to raise money for Kerrington’s Heart LLC, an organization that was founded on behalf of a girl with congenital heart disease.

What was a math nerd doing in FFA?

“I was just in that for two years before I decided just to give my full effort to FCCLA,” she said. “My grandpa was in the ag field and has a PhD and worked a lot with UK. He is a huge ag person and my brother is in the agriculture department at Eastern. Ag has just been in my family. I’ve not done a whole lot but how could I not be in FFA with my grandpa’s background.”

Despite all the time she spends on academics, athletics and extra activities at school and in the community, Galloway says she still has plan of time to have fun.

“I have fun all the time,” she said. “I try to keep a very balanced life. If all I do was school and athletics and volunteer work, I would go crazy. I want total balance in my life, so I make sure to find time to have fun. That’s why I never really thought I could win this scholarship. I am not an elite athlete. I just try to have balance but I guess maybe balance is what helped me win.”

The Boyle County boys basketball team’s year was up and down, on and off of the court. But the Rebels... read more