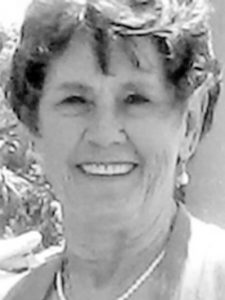 Irene Feldman, 73, of Pooler, Georgia, passed away January 25, 2019 in Savannah after a sudden illness.

Born September 14, 1945, in Lebanon, Ky., she was the daughter of the late Tillman and Cordie Miller Milburn. She was a retired employee of Norfolk Southern Railroad and attended Sacred Heart Catholic Church in Savannah.

In addition to her parents, she was preceded in death by two daughters, Jamie Hampton Redmon and Donna Deering.

Irene’s survivors include her husband of 37 1/2 years, Herman; a brother, Gerald Milburn; several grandchildren; and several nieces and nephews.

A memorial service will be held at noon Saturday, March 2, 2018 at Ramsey-Young Funeral Home with inurnment following at Bethlehem Cemetery in Springfield.

A gathering of family and friends will take place from 10:00 a.m. until service time Saturday at the funeral home.

Friends and family may leave condolences or special memories on her tribute page at www.ramsey-young.com